Games about Giant Robots Should be Fun, Right? 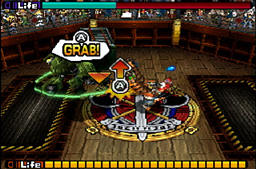 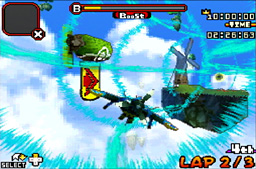 HIGH The opening video is gorgeous.

LOW Combat is simpler and more boring than it first appears.

WTF Yay! New chapter! Wait…I have to go back and do extra quests just to unlock the next part of the story?

A game where I pilot a giant mech should be awesome, right? Who wouldn't want to wander around in a giant freaking robot, raining destruction on one's enemies and shooting lasers all over the place? The problem is, my few forays into the genre have shown that my inner ten-year-old has different ideas about mechs than development teams do. Inching along in my huge, clunky robot while fights take forever is probably realistic, but it isn't very fun. Solatorobo: Red the Hunter

from CyberConnect2 and XSeed Games may be the most streamlined giant mech game I've ever played, but that isn't saying much.

Set in a world of dog and cat people (Caninu and Felineko, respectively), the game follows a Caninu named Red Savarin as he tries to stop a giant monster. As a freelance "Hunter," he does odd jobs to prove his worth and also to make money to buy parts for his giant robot, the DAHAK. Red is a loose cannon idiot hero, the type of guy whose mouth gets him (and the player) into lots of trouble. Such a character might be endearing in non-interactive media, but when Red says: "That's so easy I could do it [insert extra layer of difficulty/ridiculousness here]!" he's putting my money where his mouth is. To be fair, he doesn't do this very often, but I was annoyed enough to remember it. However, apart from that line, remembering Solatorobo is my main problem with Solatorobo: it's so simple and repetitive that even though I just finished, it I don't recall much about it.

Combat in the DAHAK involves picking up enemies or objects and throwing them—it's an interesting mechanic, and, fortunately, the robot maneuvers well enough to pull it off. Unfortunately, picking up things and throwing them is very simple, and gets old quickly. Since tossing objects is the only "weapon" the player has for a very long time, and while the game does its best to spice things up, there are only so many ways to lift and throw things. Although Red can buy new stat-increasing parts for the DAHAK, he can't purchase new weapons. An equippable laser-cannon or flamethrower might have gone a long way toward keeping fights fresh.

Speaking of repetitiveness, Solatorobo revolves around the completion of quests to get Red to "rank-up." Quests aren't a bad thing in and of themselves, but even those necessary for working through the main story depend on one's Hunter Rank. After finishing a chapter, I often had to stop and do extra quests just to unlock the next thing I was supposed to do. Going back to places I'd just come from killed the momentum of discovery every time.

—not only because of its big freakin' robots, but because I was interested in its world of cat- and dog-people, but as much as I tried, I couldn't care about the story or the people in it. There were interesting ideas—and a very pretty opening video—but everything about Solatorobo felt…flat. Even hating something about it would make the game easier to review. In reality, just playing it was draining, and left me feeling numb and anxious for the experience to be over. Rating: 3.0 out of 10.


Disclosures: This game was obtained via publisher and reviewed on the Nintendo DS. Approximately 15 hours were devoted to the single-player mode (completed 1 time). No time was spent in multiplayer modes.

Parents: According to the ESRB, this game contains fantasy violence, mild language and suggestive themes. While there are explosions when robots are beaten, all the violence is very cartoonish. Also, one character's sex is the opposite of what the audience first thinks it is. This plot point is revealed when someone walks in on them naked. (There's nothing explicitly shown, though.)

Deaf and Hard of Hearing: All dialogue and mission information is presented in text, and there are no significant auditory cues. I played a lot of the game with the sound off and had no problems.

“Unfortunately, picking up things and throwing them is very simple, and gets old quickly”

This is exactly the reason I stopped playing FF Crystal Bearers.

agreed. Wanted to like it, but played for a few hours and never returned. A game should grab you.