A Dog and his Brat 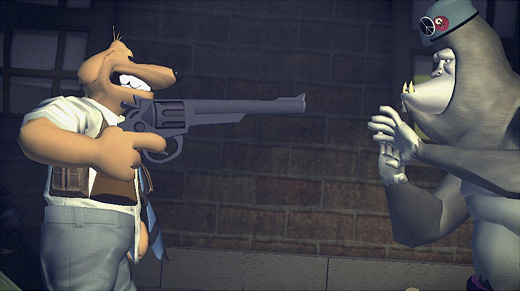 Low: It was over too soon.

WTF?: That a game about a boy Pharaoh who bends reality to make himself supreme ruler doesn't have any WTFs.

I tried to read the Twilight saga once. While the first book had the morbid impetus of a car crash, New Moon was just unreadable. It separates Bella from her vampire boyfriend, which is supposed to create tension (Will they get back together?) but only showed me how poorly-written and boring Bella is. She can literally do nothing without Edward; she has no personality at all and needs his sort-of-interestingness to make her tolerable. In a sense, They Stole Max's Brain! is the New Moon of The Devil's Playhouse: Sam spends a chunk of the game without Max making jokes or prodding him to do things, but unlike Bella, Sam is well-developed enough to carry these sections on his own. He proves himself to be more than just a player stand-in or Max's straight man.

In the beginning of Sam & Max: The Devil's Playhouse — They Stole Max's Brain!, Sam the dog is alone. He's the only one who can find out more about who committed the titular act, why, and most importantly, where his friend's brain is. As he interrogates witnesses or explores a museum, I see a strength in him that's not out of character at all, but one which I wasn't expecting.

In his new Maxless life, Sam meets the most interesting character in They Stole Max's Brain! who is, oddly, the most stereotyped. Perhaps it's not so odd after all; Telltale seems to know instinctively what stereotypes still have some life in them and how to milk them for all they're worth. In any case, the several-thousand-year-old boy pharaoh Sammun-Mak is exactly what one would expect him to be: egotistical, demanding and whimsical in the worst possible sense—everything is either the best thing ever or the most horrible thing in the world, yet there is something likable in the little tyrant.

I wouldn't want to strike up a conversation with him, but watching Sam talk to him is agreeable. Part of the pharaoh's sour charm is that he functions a lot like Max does, but in a different way. Sammun-Mak is as excitable, as decisive (at least momentarily) and as impulsive as Sam's usual partner ever was. Sam takes the pharaoh's abuse just as cheerfully as he does Max's, even if he's not quite as obsequious as he appears. In the pharaoh, Telltale has struck a fine balance between keeping what fans know and love and changing it enough to keep it fresh. More video game sequels could learn from the work here.

Sam is not as loud or as fast as his partner, and his one-liners aren't the same kind of funny, but he is capable in his own quiet way. But then, he always has been; his calm thoughtfulness is how we find out information, and he even makes Max usable to us. I knew all this before—as I had known while reading Twilight that Bella was boring—but They Stole Max's Brain! accentuates Sam's own special powers. While Max was away, I came to appreciate Sam on a whole new level. Rating: 9.5 out of 10.

Disclaimers: This game was obtained via publisher and reviewed on the PC. Approximately seven and a half hours were spent in single-player mode, and the game was completed 2 times. There are no multiplayer modes.

Parents: Although They Stole Max's Brain! hasn't been rated by the ESRB at the time of this writing, earlier chapters are rated E10+ and Teen. There are occasional minor swear words, and an instance of "live nude girls"-type innuendo. (Although in this case, they are dogs in a pet store). Kids who can play the earlier installments can play this one, I'm sure.

Deaf and Hard of Hearing: You will have no problems. Subtitles for the dialogue can be turned on via the Settings menu, and there are no significant auditory cues.