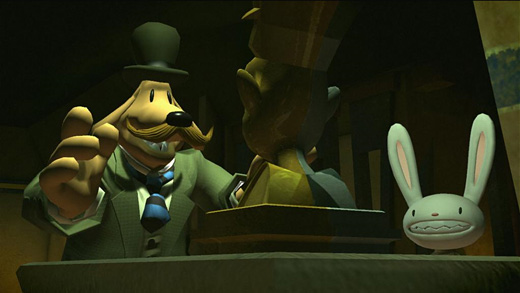 Low: That last puzzle is a tricky beast. Either that, or I'm just very unobservant.

When we last left Sam and Max, they were under their New York office in the secret lair of a moleman cult. They also saw two rabbity and dog-like skeletons. Was this a gruesome vision of their future? Not at all, it was just of the remains of their great-great grandfathers.

In Sam & Max: The Devil's Playhouse—The Tomb of Sammun-Mak, our heroes find a series of old film reels that contain a movie starring their great-great grandfathers, Sameth and Maximus. The film takes place in 1901, when Maximus, Sameth, and his handlebar moustache steal the Devil's Toybox from an Egyptian tomb. Like the last installment, the story seems straightforward—tomb-raiding is nothing unusual in old movie serials or video games. But, like a Quentin Tarantino film, it's the way the story is told that makes the game special.

Indeed, the story of Sameth and Maximus is very much like Pulp Fiction; it doesn't unfold neatly from beginning to end. The player has access to all four film reels at once. Using Maximus's power of Astral Projection, she can switch between them at will. What's the awesome toy idea that will make Santa's elves give Sam and Max the can 'o nuts in the first reel? Skip to the third reel and find out. By the time players are ready to raid the Tomb of Sammun-Mak, they will have already taken the train home from Egypt after stealing the treasure. While one could see these film reels as just a clever twist on Max's "future vision," they are more than just a way to see what the game wants us to do. The Tomb of Sammun-Mak makes players feel as if we are part of the story, crafting it as we bump up against dead ends and skip from chapter to chapter. Lost in the labyrinth, we make our own way.

Unusual structure aside, The Tomb of Sammun-Mak is still recognizably Telltale. There are tons of interesting characters to meet like a retainer-wearing teenage mole girl who writes hilarious love letters. There are also elves, vampires, (and vampire elves), not to mention Baby Amelia Earheart and a kindly old moleman who really hates people from Stuttgart. But, as in chapter 1, the game's whole is much more logical than its often ridiculous parts would suggest.

Aside from Astral Projection, Maximus can use a can o' nuts to hide in and a dummy named Charlie Ho-Tep to throw his voice in "psychic ventriloquism." (Is ventriloquy psychic? "I know exactly what my dummy's going to say before he says it," Maximus explains). Even more impressive than Maximus's powers are the curses a family of molemen can throw at him and Sameth. These, too, are useful for solving puzzles. At one point, the elves need a kid to test their secret project. Baby Amelia Earheart has too much dignity to do it, but when cursed with the "Sexo Rejexo Hex" by the mole teen's father, our heroes can make any woman recoil at the sound of their voices—violently, and into the arms of those they would not willingly go to.

However, the most clever innovation isn't the puzzles or even the characters, as well-done as they are. The most clever bit is the framing of the game as a film. With present-day Sam and Max watching the exploits of their great-great grandfathers, I'm playing as the stars of the movie. As I do, I'm so involved in Sameth and Maximus's story I often forget that, for their descendants, they are merely pictures on a screen. Rating: 10 out of 10.

Disclaimers: This game was obtained via publisher and played on the PC. Approximately six hours were spent in single-player mode (completed 1 time). There are no multiplayer modes.

Parents: According to the ESRB, this game contains: comic mischief, drug reference, mild blood, mild language, and mild suggestive themes. The Tomb of Sammun-Mak isn't graphically violent, but there's a sprinkling of salty language and a lot of innuendo.

Deaf and Hard of Hearing: You should have no problems. Subtitles for the dialogue can be turned on in the options menu, and there are no significant auditory cues.

Sure, it is hard to find new and interesting things to write about in a review of a new Sam and Max-episode, but to completly spoil its contents isn’t the right way to go. Luckily I’ve already finished this, but I can’t imagine anyone want to know about stuff lika the “sexo rejexo hex”, vampires and cans of nuts beforehand.

Still, well written review and all that, but please be less specific in the future.