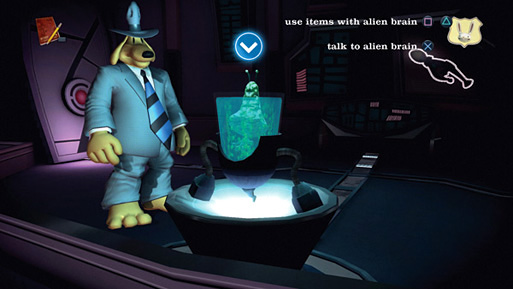 HIGH: A Scanners joke and Lovecraft references! Those never get old, dude.

LOW: Didn't I just fiddle with the boiler controls? Oh, wait: I had to do it exactly right.

WTF: A sociopathic rabbit has been elected President of the United States. Twice.

The premise of Telltale's Sam & Max: The Devil's Playhouse—The Penal Zone is simple enough—a criminal space gorilla on the lam lands on Earth, and it's up to a dog and a "hyperkenetic rabbity thing" to bring him to justice. Besides the ape there are psychic powers, mystical toys, and obscure religious cults. Such strangeness could easily turn the game into an absurd, toneless mess that's hard to take seriously, but with Telltale's deft writing and well-developed characters, even the silliest plot point is not too ridiculous to make sense.

Sam and Max are two canine and rabbitish detectives (er—freelance police) who live in New York. I get the feeling that they aren't the greatest detectives ever; they aren't above stealing from old men, and Max solves just about every problem by blowing it up. Still, they are all that stand between us and world domination and, more importantly, they're a lot of fun to spend time with.

It's a good thing they are fun. Characterization is especially important in an adventure game, where players will spend lots of time just talking to other characters. On the surface, Sam and Max should be a cliché waiting to happen: the big, slow-on-the-uptake fellow and his smaller, faster, possibly angrier partner have been a staple of everything from Of Mice and Men to Fargo, but the pairing works perfectly here because the developers manage to make the cliché work for them while not relying on it too much.

Sam comes off more naïve than Patrick Star-ish. As the player character who's asking all the questions and putting clues together, his cluelessness is perfectly appropriate. (I'm not exactly Sherlock Holmes, especially when it comes to adventure games; it doesn't make much sense to play as someone who is). As a bonus, Sam's personality allows the writers to joke about the adventure game form and not look like they're trying too hard. "Can I just give you your crystal shard or key so you can go off and do whatever it is you do?" a frustrated interviewee asks. "Sorry, Stinky," Sam replies. "We gotta go through all the questions. It's the rules." 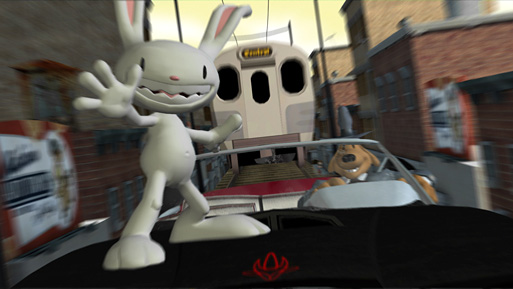 Telltale isn't the rule-following stickler Sam is, thank goodness. Asking questions and solving puzzles are perfectly good mechanics for an adventure game—and there are plenty of those here—but the developers are so familiar with the formula that they aren't afraid to break out of it. For example, Sam's partner Max may be high-strung and amoral, but he's also got psychic abilities that are unlocked by special Toys of Power.

With the Eyes of Yog-Soggoth, for instance, Max can see into the future by looking at any object or character. At one point, someone refuses to give the freelance police something they need because he wants to use it to make tons of money. Turning the Eyes of Yog-Soggoth to a nearby radio, Max learns that a big-winning lottery ticket has been sold to a familiar (and stupid) person.

Throughout the game, Max's future vision is very useful for giving players some hint of what to do next when they get stuck—especially since they can switch between Sam and Max at any time. Max is also able to teleport himself and anyone he's touching, using telephones. Any telephones. Aside from getting the detectives into and out of places where physical access is blocked, this power allows Max to move other characters to different locations—a skill that comes in really handy. While future vision and teleportation are the skills most used in The Penal Zone, there are (strong) hints that Max will discover more skills in subsequent chapters.

The beauty of The Penal Zone is how well its often silly elements fit together. Telltale always keeps the game's absurdity from overshadowing good storytelling or game logic. In fact, Sam & Max's disparate pieces come together so well that the game's one tiny slip-up seemed much bigger than it was. Near the end of the game, Sam is supposed to turn up the heat on a boiler. To touch the dial, the player has to click in exactly the right place. Having to find this place took me out of the flow of the game. This tiny hiccup only happened one time; it's not even a pattern. Still, all other aspects of the game play off each other so perfectly that this one out-of-step instance stuck out all the more for me.

The first chapter of Sam & Max: The Devil's Playhouse shows us that storytelling in games doesn't have to be a luxury, and perhaps shouldn't be. In The Penal Zone, good writing isn't just an added bonus: it infuses every aspect of play. Without its story or characters—without Sam and Max—Sam & Max would be nothing. For Telltale, storytelling is not an amenity; it's central to the entire project. If only more developers understood that. Rating: 9.5 out of 10.

Disclaimers: This game was obtained via publisher and reviewed on the PC. Approximately six hours were devoted to the game, and it was completed.

Parents: According to the ESRB, this game contains: alcohol reference, cartoon violence, comic mischief, mild language, and suggestive themes. The ESRB's list is pretty accurate. There are several "damn"s and "hell"s, as well as some sexual innuendo—mostly in the form of "penal zone" jokes. Max isn't exactly a morally upstanding citizen, either. The Penal Zone should be fine for older children and teens.

Deaf and Hard of Hearing: You should have no problems. Subtitles for the dialogue can be turned on in the options, and there are no significant auditory cues.

Adventure games seem like they always pull off narrative the best out of any genre, simply because it’s so important. Whereas in other game types the story ranks bear the bottom of the food chain in terms of time and resources to allocate to it.

So, better than the first Sam & Max games from Telltale?