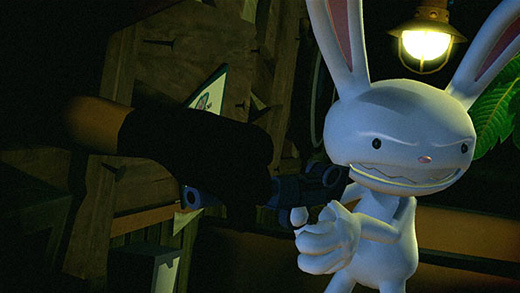 LOW The characters take a backseat to the bizarre story.

There's not much I can say about Beyond the Alley of the Dolls. As the second-to-last installment in Sam & Max: The Devil's Playhouse, it ramps up the action and starts tying loose ends of the story together. It's a fine example of storytelling, but difficult to review without spoiling for people who haven't played it.

The little I can say: our heroes are being chased by a horde of underwear-clad Sams. What are they? Where did they come from? For a while it looks like these questions have no hope of being answered, because Max and Sam 1.0 can't even decide what to call them. (Sam likes "Samulacra;" Max insists on "Doggelgangers." I'm with Max on this one). The only thing they know is what the Sams want, which is the same thing that every villain has wanted so far—toys.

The story is ridiculous without being ridiculous at all. Yes, it's the most shameless borrower from Lovecraft since August Derleth, but we also learn the identity of the mysterious Dr. Norrington and just who in the hell Girl Stinky has been texting all this time. Unfortunately, the interesting characters (always my favorite part of a Telltale adventure game) have to move off to the side for all this story to happen. I know it has to be this way because introducing new characters now would be messy, and various questions need to start being answered. The developers could not have spent more time with Papierwaite or Sal or Dr. Momma Bosco and still had time to do all that needs to be done. Still, I can't help but be a little disappointed. At least I learned that Girl Stinky isn't a total ice princess.

The gameplay in Telltale games are mostly vehicles to more story for me. Sometimes the ride is interesting, sometimes slow and frustrating. With more practice at these kinds of games, the puzzles have gotten easier to figure out. Even if I do struggle with a puzzle, the logic behind it always ends up making sense. I feel more "Of course! How silly of me not to notice!" than "What the hell were they thinking here?"

At one point, Sam and Max are at the harbor, which is full of Sams. Someone I want to talk to is standing by a building; every time I try to go over there, the Sams spot me and chase me through the city. I eventually figured out how to distract them, but I didn't realize that there was another person I could talk to there as well. (To be fair, they are so removed from the concept of "person"—even in Sam & Max's fast and loose sense—that I didn't realize I could talk to them). I only figured out my mistake much later, after getting completely stuck. Once I did, I knew it was my own fault. Another time, I had no idea how to get up to the top of a platform, and kept trying to find secret buttons to push or things in the room to shoot. The answer was to use something I'd had access to for several chapters, and I did it on accident.

There's only one chapter left of The Devil's Playhouse, and I have no idea what'll happen in it. Will Lord Sammun-Mak make an appearance? (Probably not, but a girl can dream; I like the little jerkwad). Will Max finally do something presidential, like sign a bill outlawing interdimensional travel? (Definitely not). All I know is that whatever happens will be hilarious, will make sense against all odds, and will be even harder for me to write about. Rating: 9.5 out of 10.

Disclaimers: This game was obtained via publisher and played on the PC. Approximately six hours were devoted to it, and it was not completed.

Parents: According to the ESRB, this game contains: alcohol reference, comic mischief, language, mild cartoon violence and suggestive themes. Despite the title's reference to a Russ Meyer film, the stuff here is pretty tame. Language is no worse than a couple "hell"s here and there. While Sam and Max shoot things with guns on occasion, the violence is never bloody or graphic, and even the make out scene is very cartoonish. Kids who've played earlier chapters should have no problem with this one.

Deaf and Hard of Hearing: Subtitles for the dialogue can be turned on in the Settings menu, and there are no significant auditory cues. The pre-release copy I played didn't have subtitles for some of the incidental dialogue, however.