Drive-in critic Joe Bob Briggs once called Quentin Tarantino’s Reservoir Dogs a “dissemble the squad” picture. Like Snatch or Stanley Kubrick’s The Killing, it follows a group of criminals who are trying to steal something…in this case, a bunch of diamonds. Despite how careful and professional our anti-heroes are, there’s an undercover cop in their midst, and the whole plan unravels. Pretty standard stuff for a heist movie. But what sets Reservoir Dogs apart from its brethren is the way Tarantino tells his story. The plot doesn’t unfold so much as come at us like a speeding car; we’re bombarded with so many seemingly unconnected scenes that we’re as confused as the criminals. Also, the film is more interested in its characters than in the job they’re trying to pull. The result is a “heist movie” in which the heist itself is completely skipped over—most of it takes place after the diamonds are stolen. By the end, everyone is either dead or in jail. (Hey, I like Mr. Pink. I prefer to think that the cops just put him away for twenty years).

In short, Reservoir Dogs isn’t the kind of movie you’d think would make a good videogame. And if Volatile Games’s effort to turn it into one is any indication, you’re absolutely right.

Here are the basics: players control one of the six criminals in fifteen different missions that all play pretty much alike. In most of them, the guys have to get from one end of the stage to the other by taking hostages, disarming cops—usually by beating hostages—and, if worse comes to worse, shooting their way through. (But be careful. Killing people raises the alarms, alerts more cops, and pushes one’s player ranking toward “Psychopath.") It gets boring taking one hostage after another, so each level has “blueprints” hidden in it: finding 10 of these unlocks something new in the art gallery. 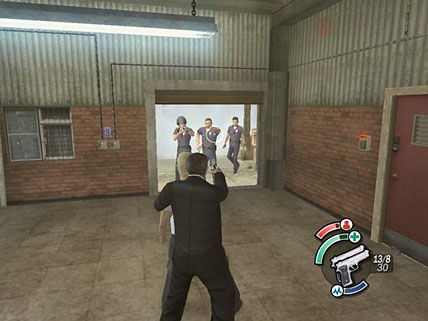 Players can also perform “signature moves” (when the character does something so horrible to his hostage that all cops in the vicinity drop their weapons in disgust) or trigger “bullet time,” which slows down the action so that they can accurately target people and blow them away in a fun gore tableau. To do these things, the player must fill up a blue “Adrenaline” bar by forcing cops and civilians to lean against walls—i.e. “neutralizing” them—or by killing them.

The monotony of “take hostage/neutralize cops/pull off specialty move/rinse/repeat” is broken by a few driving missions: players might have to race somebody to the hideout, get rid of the cops tailing poor Mr. Pink, or get to the warehouse before Mr. Orange dies of his gunshot wounds. In the most inspired—and most difficult—part of the game, Mr. Brown has to drive his companions from the heist. Unfortunately, he’s been shot and blood is running in his eyes. As he drives, the screen gets redder and redder until the player can only see the center clearly. If one takes too long to complete the mission, Mr. Brown dies. It’s frustrating, but clever.

Still, even this small bit of innovation can’t save this game from its own dullness. Part of the problem is that, in order to make a game out of Reservoir Dogs, the developers had to put scenes into it that the film is notable for leaving out. We learn where Mr. Pink hid the diamonds (in a place that looks just as unremarkable as every other stage in this game) and we reenact the heist, in all its repetitive glory. The game takes a lot of the mystery out of the film, and unfortunately, mystery is one of the movie's strengths. 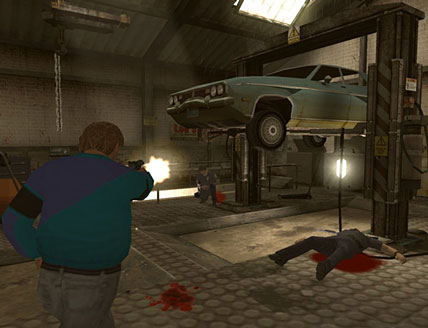 Another of Reservoir Dogs’s strengths is its actors, and the game removes most of them, too. Michael Madsen reprises his role as Mr. Blonde, but all other in-game speech is impersonated with varying degrees of success. Whoever’s voicing Mr. White does a pretty good Harvey Keitel, but Mr. Pink and Mr. Orange just do not sound right.

If Volatile Games got anything about Reservoir Dogs right, it’s the music. All the great songs from the movie are here, most of them stuffed into the car radio Grand Theft Auto-style during the driving missions. The driving itself may get boring, but at least I can listen to “Stuck in the Middle with You” or “Hooked on a Feelin’” as I’m doing it.

Reservoir Dogs the game takes a groundbreaking film and jams it into a formula it wasn’t meant to fit in the first place. Some heist movies don’t have heists, some stories are told out of order, and some movies aren’t meant to be games.Rating: 3 out of 10