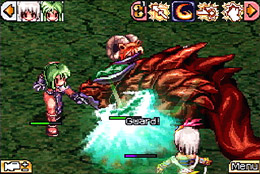 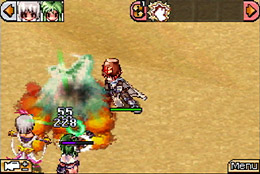 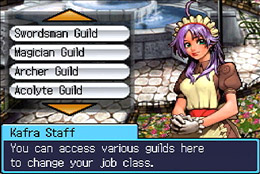 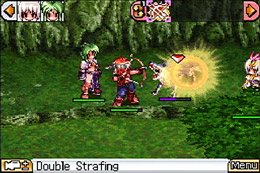 Low: Waiting for something interesting to happen, and realizing it won't.

WTF: This game isn't interesting enough to even have a WTF moment.

I can't stop playing Ragnarok DS—not because the game is too enjoyable to put down, but because I keep waiting for something to happen. Anything. An uber-weapon. A super-challenging hidden dungeon. An interesting plot point. But after 70 hours of skill allocation, job leveling and killing the same monsters over and over again, I feel like Ben Stein waiting for Ferris Bueller to come to economics class. Whatever I'm looking for isn't here, no matter how badly I want to find it.

Ragnarok DS is the portable version of Ragnarok Online, a free-to-play massively multiplayer online role-playing game (MMORPG) from South Korea. It follows Ales, a spiky-haired young man who sets out to be an adventurer. He meets a mysterious girl in a headdress who doesn't remember who she is. Run-of-the-mill RPG stuff, in other words. Ragnarok DS is basically an MMO that fits in one's pocket—with all the strengths and weaknesses that entails. Combat is World of Warcraft simple: touch an enemy with the stylus and watch your character attack it. Grinding in an inescapable part of Ragnarok DS, as important here as it is in the PC MMO it's based on. Characters have two kinds of levels—a "base level," which controls their stat points (Strength, Defense, Magic Attack, etc.,) and a "job level," which gives them points to apply toward specific abilities, like Sword Mastery or shooting ice-bolts at enemies. Each job in the game has two tiers. When a Magician's job level hits 30, for instance, he or she can become a Wizard, which unlocks more skills to learn. Thus, if a player wants to max out a character's skills in their specific job, she's going to spend a lot of time killing the same monsters over and over again.

And that's just maxing out skills. Those who want to give Ales the best overall stats will have to perform "limit breaks." These are a rebirth of sorts that sets the main character's base and job levels back to one, and removes all learned skills. While such a move seems nothing more than a way for masochists and hardcore players to challenge themselves, it gives the player lots of stat points to distribute. The higher the character's base level when he limit breaks, the more points he gets. In order to give Ales the best possible stats, players must limit break dozens of times.

A battle system that may seem to have some depth at first glance merely masks how empty the game really is. When I'm not watching my party kill monsters, I'm running between the same few places. Yes, there's an item to make traveling between towns easier. That merely eases the problem; it doesn't fix i completely. Several times I would "defeat" a boss, only for it to get up and run off somewhere else. Then I'd have to find it and kill it again. And again.

I like repetitive combat, the kind that bores most people to tears. But while a Nippon Ichi title structures its combat to keep the rewards flowing (players are even rewarded for failure), what's on display here feels like padding—more Luminous Arc 2 than Disgaea. And Luminous Arc 2, at least, had an interesting storyline. Ragnarok DS may have a girl with an unknown past and a group of people who want to use her for vague-until-the-endgame Evil Things, but 90 percent of the story is that someone wants to be adventurer so he can make tons of money. Even the dialogue seems padded. The protagonist often repeats things people say to him in the form of a question. ("There's a sacred tree!" "A tree?") While this response is understandable for someone who's continually faced with strange things, it's annoying for players who keep having to read the same thing twice—and push the A button twice as often.

Ragnarok DS's problem is that decisions that are forgivable in a free MMO are really grating in a single-player game that costs money. For most of the game, there are no human beings to talk to or show off for or fight. (There's a multiplayer dungeon called the Mirage Tower, but the multiplayer isn't integrated into the main game and it comes off as too little, too late). There's nothing here that hasn't been done before—and better—someplace else. There's nothing here, period. Rating: 4.0 out of 10.

Disclaimer: This game was obtained via publisher and reviewed on the DS. Approximately 70 hours were devoted to the single-player mode. (Completed 1 time). No time was spent in multiplayer modes.

Parents: According to the ESRB, this game contains: alcohol reference, mild fantasy violence, mild language, and suggestive themes. Ragnarok DS should be suitable for older children. The swear words are all of the "damn" and "hell" varieties; the violence is completely bloodless whacking with swords and zapping with magic spells, and the "alcohol reference" must come from the fact that the player goes into taverns to accept sidequests. The female guild members don't even wear skimpy outfits, which is unusual for a Japanese role-playing game.

Deaf and Hard of Hearing: The Japanese role-playing game has always been fairly accessible to gamers with hearing impairments, and Ragnarok DS is no exception. All mission information and dialogue is presented in text, and all auditory cues of any significance are accompanied by visual cues. I played much of the game with the sound off, and had no trouble.