A Rubik's Cube for the digital age 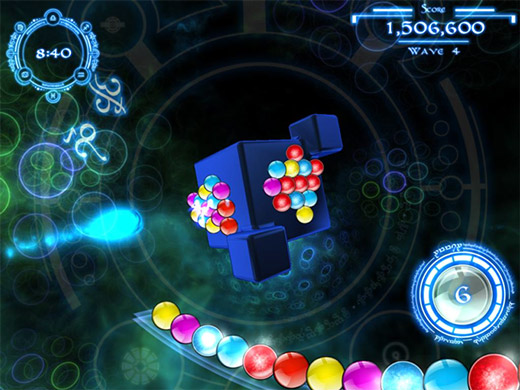 HIGH: The graphics and sound are beautiful, and flow like a clear, computerized river.

LOW: Flipping the cubes is a delicate operation, and often frustrating.

WTF: It's a puzzle game. The whole concept is one big WTF, really.

Puzzle games are hard to review. Many of them are merely variations on a theme (or two), endlessly tweaked to perfection like so many editons of Madden. Whether it's blocks falling from above or jewels flipping, many puzzlers spend more time tweaking successful formulae than breaking new ground. With Quantz, Montreal developers Gamerizon have stepped away from the siren-song of this safety zone. There are jewels, but what players do with them is unlike anything I've done before.

That's because the "world" of Gamerizon's Quantz is a three-dimensional cube. On this cube are balls of different colors called quantz; the object is to create a group of four or more of these colored balls. What makes Quantz so unusual is that the player manipulates the cube instead of controlling the quanz directly. Rotating the box this way and that like a digital Rubik's cube, players try to get all the same-colored quantz together—which, when it happens, does feel very much like clearing a side.

Like the Rubik's Cube, Quantz's objective seems simple, but isn't at all. The game's laws of physics dictate that the smallest number of quantz is the easiest to move. It's fairly easy to flip a lone quantz from one panel of the cube to another, but try to flip five (or even two or three), and they scatter like so many playing cards.

Luckily, the delicate art of quantz-flipping isn't the only tactic available. There's also peer pressure. Say one quantz is huddled amid a different-colored group of quantz; when the group is cleared, that odd quantz out turns into a fireball. This fireball can wipe out a whole group of quantz that share its color. It's also possible to set off chain reactions: tendrils of blue electricity signal that one explosion of color can, domino-like, trigger others.

I can describe what Quantz is, but I'm still not sure how I feel about it. The graphics are gorgeous, the gameplay far more complex than the block rain or jewel swap of other puzzlers. I've never played anything quite like Quantz before—and yet, I just couldn't get into it. Perhaps its very complexity was the problem; instead of being the mindless, brain-resetting exercise that Tetris is for me, Quantz asks me to think. And, though the game's Puzzle Mode serves as an in-depth tutorial, my brain got tired of keeping track of all Quantz's rules after a while.

While I didn't warm up to Quantz, the reason has more to do with a personality clash between us than any fault of the game. It's unlike any puzzle game I've ever played—a huge accomplishment in a genre saturated with Tetris and Bejeweled clones. Although it was a little too different for me, I recommend it to anyone tired of the brick rain-jewel swap dynasty. Rating: 7.0 out of 10.

Disclosures: This game was obtained via publisher and reviewed on an Intel Mac (OS 10.5 and .6) It is available for both Mac and PC. Approximately 5 hours were devoted to the single-player mode, and the game was not completed. There are no multiplayer modes.

Parents: Although Quantz hasn't been rated by the ESRB, it has nothing objectionable in it whatsoever. The only characters are brightly colored balls, their world a giant cube. Have no fear.

Deaf and Hard of Hearing: You should have no problems. The game has no dialogue (or story), and all mission information is conveyed in text.

I am stuck at the Tau realm – Black Quantz Strategy and Action levels…having difficulty clearing the black Quantz…may I ask if you have achieved this feat?..if so, please give me clues as to how to clear the black quantzs.

THis game is even getter in 3D Vision (from NVidia), you can really see the quantz floating around from your screen….