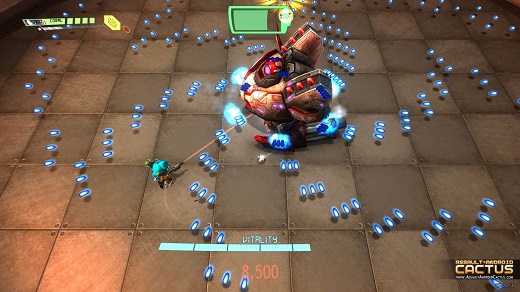 Australian indie developer Witch Beam has only made one game so far, but boy, does it set the bar high. Assault Android Cactus is a manic twin-stick shooter in the style of Robotron 2084 and Smash TV. In early access alpha, the game is not yet complete: only three of its five bosses are available at the time of this writing. Nevertheless, what's on offer is not only polished, but has solid, addictive gameplay under the hood.

Like many shoot-em-ups, the story is pretty simple. Most of the robots on the titular character’s spaceship have gone rogue, and it’s up to androids Cactus and her friends to subdue them. The game can be played with a mouse and keyboard, but I had a much easier time with an Xbox 360 controller. The right analog stick controls movement while the left one aims the android’s main weapon; the right trigger button fires and the left one switches to the sub weapon. There are several characters and weapons to choose from, and even more to unlock.

An interesting twist to the traditional formula here is that players don’t lose lives, exactly. The androids need batteries to run; the only way to get a Game Over is if the green battery on top of the screen runs out.

On the one hand, it doesn’t matter how many times the player gets knocked down by enemies as long as they have juice. On the other, the hunt for batteries adds even more urgency to the already-frantic proceedings. Often a new battery would pop up just as mine was about to die—do I give into the impulse to charge in and get hit just to pick it up, or do I stop panicking and wait for a clearer path? 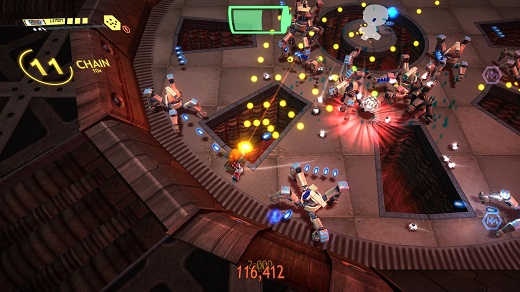 This need to keep one’s battery charged means stages must be cleared as fast as possible. Thankfully, power-ups that make one’s character faster or give them extra firepower help with mowing down enemy swarms. Speed is also key to the elusive S+ run, wherein the player clears a stage without breaking her attack chain. The rush of chasing an S+ rank is a hell of a high—I’ve lost count of how many times I’ve restarted a stage just because I took a bit too long to kill an enemy. Not that I’m bothered. Like the best arcade games, Assault Android Cactus urges me to keep going, to do better, and to enjoy every minute of it.

Those who still want more can check out the extra modes: a boss rush mode wherein players face off against the game’s three available baddies one after the other, and my personal favorite, Infinity Drive. The goal there is to survive as long as possible, descending floors or “layers.” I don’t know if there’s an end or not, but it doesn’t matter: destroying robots and watching the stage shift and change colors puts a smile on my face, regardless.

While the smooth, frenetic gameplay makes the game strong on its own, I also really liked the characters—and not just because of their weapon types. All of the androids are cute, and even though there’s not much of a story, I liked the bits of their personalities that shine through during victory screens and whatnot—things like Starch’s unusual names for the power-ups, or Holly’s fearfulness and uncertainty (appropriate, since her homing shot makes her a good choice for new players).

It may seem odd to pay $15 for an unfinished game, but Witch Beam have truly outdone themselves. Assault Android Cactus is a pure joy to play, and the developers are still open to feedback. They’ve put out an amazing first project, and I for one can’t wait to see what else they accomplish.

Disclosures: This game was obtained via publisher and reviewed on a 2.9 GHz Intel Core i5 iMac running Mavericks. Approximately 28 hours were spent in single-player modes, and all stages available at the time of this writing were completed. No time was spent in multiplayer modes.

Parents: This game hasn’t been rated by the ESRB, but I’d give it an E or E10+. All the violence is shooting robots who come apart in a cartoony fashion, and there’s no bad language, suggestive themes, or even impractical armor for the many female protagonists.

Deaf and Hard of Hearing: The androids do like to shout the names of power-ups they get and, more importantly, when there’s a battery in the area. However, there are still visual cues for these things: even if a battery is offscreen, there’s a visual marker. I spent some time with the sound off expecting to have problems, but had none whatsoever.