A friendship built on a rotten foundation 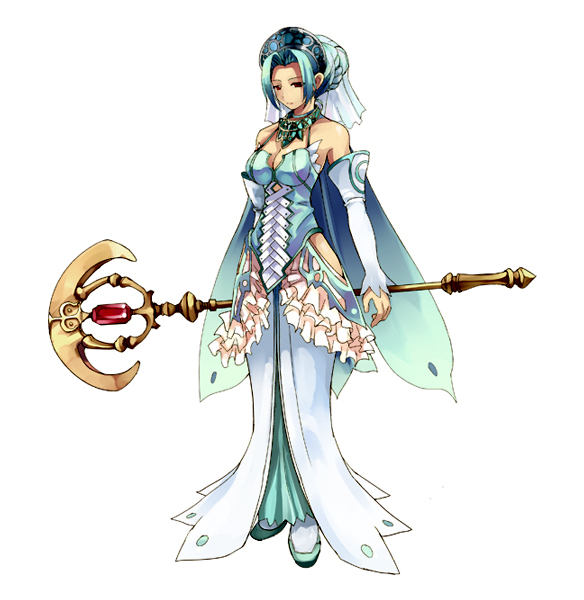 HIGH The steady unfolding of plot and character development that makes me feel like I'm watching a movie.

LOW The lukewarm battle system that makes me feel like I'm watching a movie.

WTF One of the witches our hero can be "engaged" to—complete with wedding gown—is 12 years old.

Luminous Arc 2 isn't a game for everybody, and doesn't try to be. That's all right; there's plenty of room for niche game titles, especially with publishers like Atlus to give them good homes. But while its niche-ness gives Marvelous Interactive's strategy role-playing game (RPG) room to explore characterization in ways most games don't, its core mechanics—its strategy—are thin, repetitive and uninteresting.

On the surface, the game's story sounds like standard RPG fare. The player controls a young knight-in-training named Roland. His is one of three Knight Squads that protect kingdom Carnava and its queen. Carnava is also home to witches and wizards; one of them, the Shadow Frost Witch Fatima, is at war with the others. Monsters known has "Beast Fiends" have descended on the kingdom, and the knights think that Fatima's actions have something to do with their appearance. But it isn't long before we start to question what we see. Roland's brother Rasche doesn't trust any witches at all. The brothers' friend Steiner is working on a mysterious device called a Runic Engine, which has chosen Roland by latching onto his hand. The inventor is beyond peeved that his project chose someone other than himself. As for Fatima, is she really out to destroy the world, or is she trying to save it as much as Roland is?

Character development is essential to Luminous Arc 2, and not just the learning one's last spell at level 30 kind. Throughout his journey, Roland talks to everyone from other knights to magic students to members of his own party. Many of these dialogue scenes are optional, but they let us get to know the characters as if they were real people. Yes, there's plenty of (literal) slapstick, petty arguments and fan service, but I also learn that priest-in-training Pip makes good tea and that as a child, Steiner's sister Rina had drawn a picture of herself, her brother, Roland and Rasche and put it in their time capsule so that they would stay friends forever. Perhaps the power of these sequences comes from not having them forced on me. Rather than interruptions to the game I'm playing, these scenes feel like opportunities to learn about the people I'm playing as. 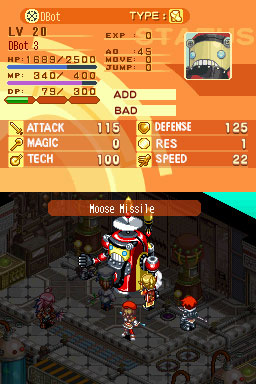 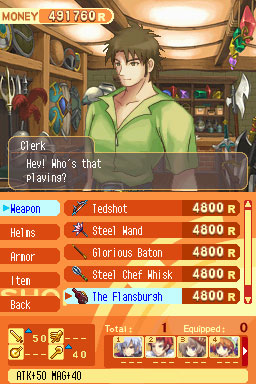 Roland's relationships affect the skills he has as well. He gains powers by entering into a bond with each witch in his party. These bonds are literal marriages: the witches give him their rings, and in battle, players activate Roland's new powers by "engaging" the witch who gave them to him. Each engagement is prefaced by a pan of the witch in a wedding gown. Roland's witch-powers aren't as strong as they are when witches use them (or as strong as his own), but they add elemental effects to his Flash Drive, which is the most powerful move someone in Luminous Arc 2 has.

After certain battles Roland can choose a member of his party to talk with; that character's Philia (friendship) points increase depending on what Roland says. What makes these "Intermissions" interesting is that the answers leading to a "Best Break" which earns the most Philia points aren't always the most flattering ones. To get one of Rina's Best Breaks, Roland should tell her that the dish she made is "ghastly," and that she used "too much salt." The object is to keep the conversation going as long as possible, which sometimes opens up arguments and misunderstandings. In the game, as in life, we don't develop strong relationships by always telling people what we think they want to hear. Roland's honesty allows problems to be solved and bonds to deepen.

Despite its complexities in character development and relationship-building, Luminous Arc 2 has dropped the ball in regards to actual gameplay. Combat is simple, boring, and not all that strategic—which is ironic, considering that it's a strategy RPG. The witches have elemental powers, but opposing elements like light and dark cancel each other out in both directions. Perhaps in keeping with the game's relationship themes, these opposing elements are strongest in healing or supportive magic: Fire witch Althea is greatly healed by Tide witch Luna's water-based healing spells, for instance. The problem is, supportive magic is few and far between, and some characters can only cast their scarce supportive spells on themselves (e.g. Althea's magic-boosting Intention). In fact, a character only learns about five spells over the course of the game. While some opponents have weaknesses in physical or magical defense, most offensive strategies focus on position. Attacking enemies from the rear or the side does more damage than engaging them straight on. 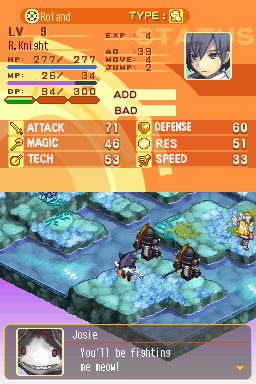 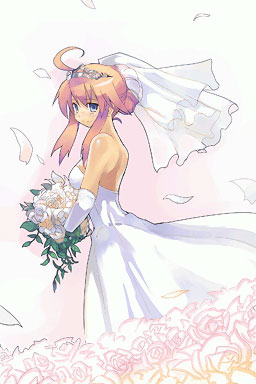 The narrow spell lists and basic stat effects mean that the only real way to advance in Luminous Arc 2 is to have higher stats than one's opponents. The only way to get higher stats is to grind. And since the battle system has no depth whatsoever—"Use characters' most powerful attacks until everyone dies. Re-take the quest and repeat"—Luminous Arc 2's combat gets repetitive and dull really fast.

The gameplay is so poorly thought out that, to my surprise, friendship development has no effect on it that I can see. Philia points don't lead to combo moves. They don't make Roland and his friends more likely to step in and protect each other from attack, and they don't give anybody special powers. Perhaps the witches' Philia Points strengthen the powers Roland gets from engaging them, but I wouldn't know; Roland's magic is so much weaker than the witch's he's engaged to that I just cut out the middleman. Also, non-witches have Philia points, too. In the words of countless bad comedians: What's up with that?

All in all, Luminous Arc 2 is a game that feels like it should've been a manga or anime instead. While its story and characters are certainly its strong suits, that strength is at the expense of what should be the heart and soul of a video game. The battle system has none of the depth of the characters, and asks us to do the same simple things over and over again. Perhaps Luminous Arc 2 is a response to much more complicated games in the genre like Disgaea or La Pucelle Tactics—an attempt to make a strategy RPG that doesn't intimidate newcomers with tons of stat checking and environmental effects. But the game's combat system is not so much pick up-and-play as it is completely lifeless. While Luminous Arc 2 is a good story, it's not much of a game. Rating: 5.0 out of 10.

Disclosures: This game was obtained via the publisher and reviewed on the DS. Approximately 65 hours of play were devoted to the single-player mode (completed 1 time). No time was spent with multiplayer modes.

Parents: According to the ESRB, this game contains Mild Fantasy Violence, Mild Language, and Suggestive Themes. Like many RPGs, the female characters wear revealing clothing and there's teenage sexual angst throughout. While I wouldn't recommend it for younger children, it should be fine for teens.

Deaf & Hard of Hearing Gamers: You should find this game accessible. All dialogue and battle commands are in text; I played most of the game without sound, and had no problems whatsoever.