Again for the Third Time 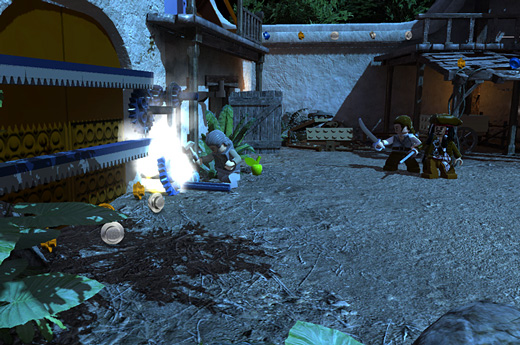 High Getting unstuck by realizing that I'm a goofus, rather than checking an FAQ and thinking: "How was I supposed to think of that?"

"They made the same movie four times," drive-in movie critic Joe Bob Briggs once wrote, describing the Friday the 13th franchise. I don't think I can say that Travelers' Tales' Lego series is the Friday the 13th of video games with a straight face, but nevertheless, Lego Pirates of the Caribbean

For those who are unfamiliar, Lego Pirates of the Caribbean is an adventure game that allows you to play through all four films using toy-like Lego versions of Captain Jack Sparrow and company, who act out movie scenes in adorable, wordless fashion. (In particular, Davy Jones is much cuter than should be legal. Why are you laughing?) Each character has a unique skill that's useful for solving certain puzzles. Jack can use his compass to find items and his sword to grapple to high places, Mr. Gibbs can forge broken machinery, and Elizabeth Swann can jump extra high.

With its focus on non-combat abilities, the Lego series is more about exploration and problem-solving than it is about fighting. Stages are full of secret doors to open and stuff to smash—whether to harvest the sweet, sweet currency of Lego studs for purchasing characters and other unlockables, or to build something else out of the broken pieces. (This is a game about Legos, after all.) In keeping with the theme of exploration, many puzzles are unable to be solved on the first playthrough, since no one with the proper skill is available. After completing a level, gamers can go through that stage in "Free Play" mode, wherein they can switch between any previously unlocked characters at will.

In general, the puzzles are intuitive without being easy. When I finally solved one after being stuck, I always felt more "Oh, of course!" than "How was anybody supposed to figure that out?" (Looking at you, Conker's Bad Fur Day.) Then again, problem-solving has always been the series's strength—anything requiring sharp reflexes, like combat or quick jumping, is an exercise in frustration. Perhaps it's because of dodgy hit detection, or maybe it has to do with the sudden change of pace. Whatever the reason, fighting in Pirates of the Caribbean is as awkward as it's been in other Lego games, but thankfully, the developers don't include much of it.

Those who are familiar with the Lego series will immediately see the problem here. Not only does Lego Pirates of the Caribbean have the same strengths, weaknesses and structure as its brethren, but its characters have the same set of skills. We know how to dig things up; how to use tiny characters to crawl through small doors; how to forge and to use women to jump high. Immediately I recognized green bars to hang on or pull down, silver barrels and crates to blow up, and glass or ice to shatter. Puzzles that felt like exploratory play the first time I encountered them were as exciting as old dishwater by the third.

How did this happen? A balance between familiar skills and new ones is a staple of any successful video game franchise. Indeed, some version of "A is jump, B is shoot" has existed in all kinds of otherwise-unrelated games for decades. It's only natural that Mario would always be able to jump and shoot fireballs since he's one person, but the Lego games give the same skills to vastly different people: they make Marion Blackwood, Anamaria and Princess Leia all feel the same. Even within the same game, there are several characters with the same "special" skill. They often have multiple special abilities (Marty can fit through small doors and wield bazookas, for instance), but any advantage they have becomes moot during the aforementioned Free Play, where any unlocked character can be used at any time.

It's not that Lego Pirates of the Caribbean

is a worse game than the first Lego game I played. It is, however, the same game, which means that the wonder is gone for me. Pirates of the Caribbean is still magical in a way, but I've seen all these tricks before. Rating: 5.0 out of 10.


Disclosures: This game was obtained via publisher and reviewed on the PS3. Approximately 25 hours of play were devoted to the single-player mode, and the game was completed. No time was spent in multiplayer mode.

Parents: According to the ESRB, this game contains: cartoon violence and comic mischief. The characters are toy people who don't speak. They break apart rather than bleed, don't swear, and don't wear revealing clothing. Thus, the game has less in the way of adult material than the films it's based on.

Deaf and hard of hearing: You should have no problems. There's no dialogue and all important information is displayed in text or other visual cues (e.g. Jack's compass uses visual symbols to tell players where things are). The music changes during a combat portion, but the enemies all rush you at once rather than sneak up on you—not being able to hear it shouldn't put you at a disadvantage.