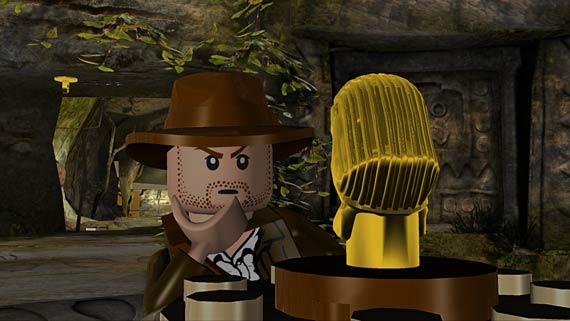 I’ve always thought that George Lucas’s archeology professor turned whip-smackin’ adventurer would be an excellent videogame hero. Unfortunately, most makers of movie-based games that I’ve played assume that I want to “relive” the movie in the most literal way. Running from one cut-scene to another—all of which I’ve seen already in the theater—doesn’t appeal to me, especially when all I’m doing is hacking monsters up and pushing boxes. What I want is to play Indiana Jones the man, not Indiana Jones the franchise.  Thankfully, Lego Indiana Jones: The Original Adventures lets me do just that.

Much like they did with the Star Wars franchise in Lego Star Wars, LucasArts and developer Traveller’s Tales have dropped Indy and his friends into a Lego-themed universe. Players can build just about anything they need out of Legos, from bridges to airplane propellers to pianos. They can also smash some of these creations to harvest the sweet, sweet Lego studs, which are the game’s form of currency. When we can’t build our way out of a problem, a character’s special skills might be able to help us. Women can reach high places and scholars like Henry Jones, Sr. can decipher cryptic runes. But we don’t just have to keep track of everyone’s strengths. We have to accommodate their weaknesses as well. As any Indiana Jones fan knows, several characters have phobias: The Temple of Doom’s Willie Scott will have to find a way around snakes before Indy can pass, and he’ll have to return the favor when they run into a nest of spiders. 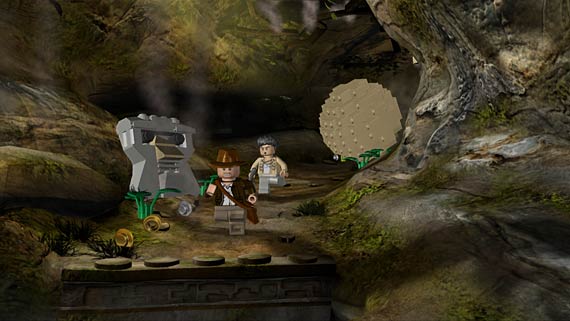 These puzzles are challenging, but their solutions are always logical in a “How could I be so stupid?” sort of way. While making my way through a Thuggee hideout,  I found a box of Lego pieces. I had to get them across a lake of lava, but with the added weight of the box Dr. Jones couldn’t jump high enough to cross the platforms. After several minutes of inching toward the edge and dying, I remembered that Indy can use his whip to pull things toward him. I always enjoyed working through these problems, which could pile on top of each other like operations in an algebra problem. I might have to jump on top of a platform, get a second character to push the platform with the first character still on it, then build an entryway for someone small like Short Round or the Maharajah to crawl through, then pull a lever to open a door to get to the next room.

Lego Indiana Jones is so successful because it reimagines the films it’s based on without reproducing them. Its characters aren’t the “real” Indiana Jones and company, but dolls. These are Traveller’s Tales’s toys, and they've invited us over to play. In cut-scenes the Lego people act out the story in pantomime, and like kids playing with toys, we don’t have to follow someone else’s plot to the letter. This is our game. Jones’s guide Satipo doesn’t have to get himself killed; Major Toht and Mola Ram can change their villainous ways, and, just for fun, we can make Indy meet up with Princess Leia or Luke Skywalker. Thanks to the freedom of pretend, I can play around in someone else’s world without being trapped in it. When it comes to games based on movies, that’s all I really want. Rating: 8 out of 10