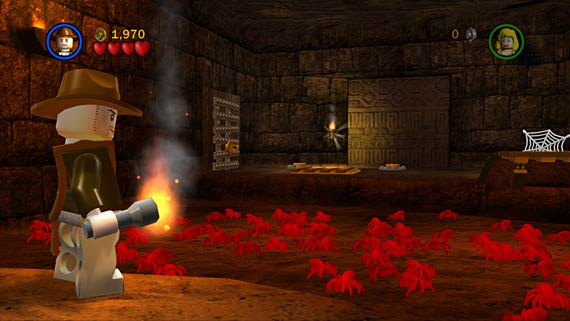 Parents have little to worry about. While Indiana Jones and his friends punch people, throw grenades and shoot guns, all the characters just explode into a bunch of blocks. The Lego aesthetic makes the game less violent than the movies it's based on. It even removes all references to Nazism.

Gamers who just want to kill an hour or two will appreciate the brief bursts of intellectual challenge that is Lego Indiana Jones, while collectionists will enjoy unlocking all the characters, treasures and bonuses for 100% completion.

Deaf and Hard of Hearing gamers should have few problems. There's no dialog to speak of, and although Lego blocks that can be used for building things make a clickety-clack sound, they bounce up and down as well. In one level Indy must spook groups of seagulls so that they fly into enemy planes, and players can hear the birds cawing as they get close to them. While the noise is helpful, it's not necessary to complete the puzzle.