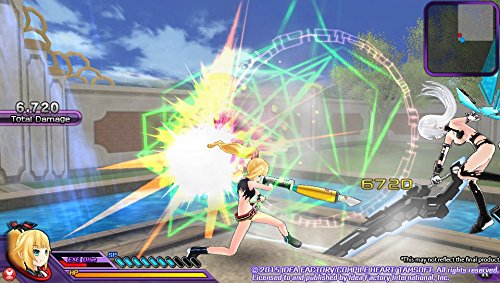 LOW My copy crashing every 20-40 minutes.

WTF "Adults could get arrested just for looking at us."

I love the Hyperdimension Neptunia series for its flaws as much as I do for the things it does well: the flagrant asset reuse, the simple grind-encouraging formula, the animation that doesn't exactly stretch the PS3 to its limits, and so on—I'm genuinely okay with these things.

Developer Tamsoft now distills the franchise into its purest form with Hyperdimension Neptunia: Action Unleashed! Unfortunately, it's a move that makes the flaws even more obvious while it flattens the comedy and the character interactions, which were always my favorite things about the series.

So what is Hyperdimension Neptunia, exactly?

In the world of Gamindustri, video game companies are personified as women, and game consoles are goddesses. What began as a literal console war fought in Action-RPG style has branched off into various alternate universes, and Action Unleashed! (a Vita game that's now being re-released on Steam) is the weirdest yet. Instead of trying to save their older sister or getting stuck in the 1980s, the goddesses are doing quests so that game journalist personifications of Famitsu and Dengekiko magazines write articles about them. The more quests they complete, the better (and more popular) the articles will be.

…And that's the whole plot.

Since the masterminds behind the titillating Senran Kagura series developed this game, the path to popularity is paved with torn clothing. As the girls take damage, their clothing can rip. It sounds like pure T&A but it's actually a useful mechanic, gameplay-wise. Showing skin allows them to access Hard Drive Divinity (a super-powered mode) immediately, rather than having to charge it up. But one questionable thing here is that everyone's clothes can be torn, including the teenage (at most!) Little Sisters. How young do they seem? Character Nepgear points out that adults could be arrested for looking at them.

The combat is reminiscent of Dynasty Warriors or Tamsoft's own flagship series, Senran Kagura. The girls take quests in pairs, and killing monsters charges the special move gauge of the partner not being used. This mechanic allows for some strategy in the sea of monotony—I liked to put a speedy sword-wielder like Noire or Nepgear in the front and a "heavy" like Blanc or Uni in the back. When their meter is charged, I'd let the heavy go to town with a giant hammer or supersized gun in HDD mode. Even with this strategy in mind, the fighting comes down to mashing buttons to slaughter as many enemies as possible, which makes the already-boring quests feel even more dull.

Most tasks are just "kill X amount of monsters"—sometimes it's 500 enemies, and sometimes it's a boss. This monotony is broken by irregular quests which don't tell the player what the winning condition is. To learn that, the player has to abandon the quest so the girls can discuss their options and give hints. Basically, I was forced to start these quests and then exit out of them to watch a cut-scene. It's terrible design.

Making the experience even more exasperating is the fact that the PC port is so buggy—my game regularly crashed every 20-40 minutes. The quests are usually short enough that I could save after finishing each one, but the game crashed on the "All Done!" screen several times, requiring me to repeat those tasks. All the crashes also sucked all joy out of the banter in the scenes after the quests, too. I normally love the character interactions, but instead of savoring them I worried that they would go on so long that the game would crash before I could save my progress.

Putting the game's technical failures aside, it was narratively disappointing. There are few characters in this installment (only the goddesses and game journalists appear—none of the mascots like NISA or IF and Compa have shown up) and the story is just so paper-thin.

Action Unleashed! is a side-story, slice-of-life diversion from the meatier main games, and doing quests for popularity has always been a feature of Hyperdimension Neptunia. The difference for me is that when the story revolved around an evil goddess trying to get players to cheat their way through games or about Neptune trying to get out of the 1980s, it already felt like I was doing sidequests. Without any motive besides "get famous," the quest-event-repeat cycle is even emptier than usual this time around.

The console wars of the series are over; if the focus here is supposed to be on the goddess's daily lives, shouldn't the interactions and comedy be especially strong? The writing here is the absolute weakest of the series.

Don't get me wrong—I'm honestly a big fan of the Hyperdimension Neptunia games, but Hyperdimension Neptunia U: Action Unleashed! is the dullest and buggiest thus far. Ironically, it's made me curious to see Tamsoft on their home turf: is the writing better in Senran Kagura, with characters the writers are more familiar with? Does the Dynasty Warriors-esque combat fit better in that universe? I don't know the answer, but their treatment of Action Unleashed! has resulted in less interesting combat, fewer gaming jokes, worse writing in general, and a technically sub-par product that can only be played in 20 to 40 minute chunks. Rating: 1 out of 10 (5 out of 10 if it weren't for the crashes)


Disclosures: This game was obtained via publisher and reviewed on a Windows PC with 8GB of RAM running Windows 10. 30 hours were devoted to the single-player campaign, and the game was not completed. There are no multiplayer modes.

Parents: According to the ESRB,, this game contains: fantasy violence, mild language, suggestive themes and partial nudity. There's no blood and minimal swearing, the girls getting their clothing torn is part of the gameplay—including underage girls who comment that adults could get arrested for seeing them.

Deaf and Hard of Hearing: Sound is not needed to play this game; I spent many hours with the sound off and had no problems.

Remappable Controls: The game can be played with a keyboard or a controller, and all the controls are remappable.

Colorblind Modes: There are no colorblind modes in the options.

I admit I never was able to get into the Hyperdimension series because it looks fairly devoid of substance to me; just a lot of fanservice and memes. This definitely sounds like that taken to the extreme. I HATE games where there’s no variety in missions and you’re just asked to kill either one specific enemy or a large number of them over and over again. Also sad to see that yet another JRPG completely botched its PC port.

This is a handheld game, playing in console or pc is pointless, the vita version is flawless technically.a decent game that lack content, but still is a good pick up and play game.