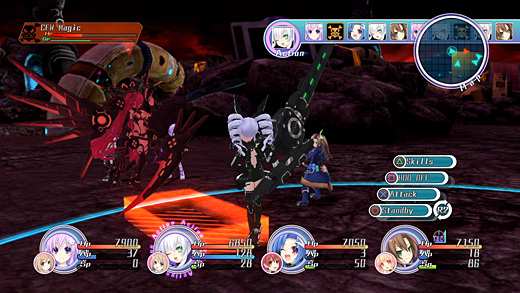 HIGH "Crap. I thought NIS America's plan was to keep that fourth wall up."

LOW Forgetting the skill commands for a new character so she can't do anything during a battle.

WTF Licking "nubile maidens" who are, like, seven years old? Robot-dude, I think this game's M rating is mostly your fault.

Reviewing isn't an objective process. Like most people, I have an aesthetic sensibility. In my case, it's a fondness for cel-shading and cartoony art. I'm less fond of photorealism, and design choices I hate in one game may be tolerable—even enjoyable—in another.

For instance, while the "boxed in" world of Summoner: A Goddess Reborn bored me and helped crush any good ideas that game may have had, I can tolerate pointing a cursor at a map in Hyperdimension Neptunia mk2

enough to spend 100 hours playing it and pick up the original Hyperdimension Neptunia, mostly because I love the characters and the writing is so strong.

Equal parts dungeon-crawler and visual-novel-without-the-decision-points, mk2 takes place in the land of Gameindustri (no, really) where anthropomorphic representation of the Sega GameGear CPU Candidate Nepgear tries to rescue her sister Neptune and the other game consoles goddesses representing the Big Three. She must recruit the other handhelds "little sisters" to help.

The game itself isn't much to look at. Blocky characters talk to each other a lot over still-image backgrounds, making slow and simple gestures now and then. Players "travel" to dungeons and towns by pointing a cursor at them on a map. Some of these dungeons look alike with the same dirt pathways, the same metallic-blue floors, and the same bland factory walls. In fact, there isn't much to do except clear out these suspiciously similar dungeons and talk to people. (This thinness, in calling attention to mk2's "video game-ness," fits in with its being a video game about video games.)

Combat is customizable and combo-based: the system is recognizable from the first game, but more streamlined. Players set moves manually, and as characters learn new moves they can be chained together in "EX finishers," which are particular sequences of button-presses that do a lot of damage. However, while the combat in mk2 was much easier for me to learn than it had been in Hyperdimension Neptunia, needing to set all my moves manually sometimes bit me in the ass. When new people joined the party (especially on new playthroughs) I sometimes forgot to set their moves and they'd spend one battle unable to attack.

However, like Dan points out in his review of the first game, mk2's writing is where the game shines. No one escapes the barbs of its satire—not even the companies who made it. (Nippon Ichi's representative is the self-appointed "heroine of Gameindustri"—a parody not only of the idealistic heroism they already make fun of, but also of their penchant for flat-chested heroines.) But a bunch of gaming in-jokes do not a story make—it's the interactions of the women and the way they play off each other that kept me interested. Nepgear, friendly but doubting her own abilities, comes face-to-face with IF's cynicism and Nisa's naive overconfidence. Her very existence triggers the other little sisters' insecurities, which in turn, trigger hers… Nepgear wants so much to be liked by everyone.

These relationships, while not fully integrated into the gameplay, are nevertheless a part of it. Players can chat with characters via a Twitter clone called "Chirper," which can trigger events to increase characters' affection, or gain a new item or skill. Also, characters can have "partners:" people who stand in the rear position in battle and give bonuses, from extra experience to increased defense to a special "coupling skill." I found myself as interested in the events themselves as in any reward they'd give me, excited for these windows into the girls' lives with their sisters and each other.

It would be easy to not recommend Hyperdimension Neptunia mk2

since it's so repetitive and not very pretty, and players spend a lot of time reading scripted events. That said, I love the women—one of the villains included—and these weaknesses are part of the game's charm for me. Rating: 6.0 out of 10.


Disclosures: This game was obtained via publisher and reviewed on the PS3. Approximately 100 hours were spent in the single-player mode (completed 7 times). There are no multiplayer modes.

Parents: According to the ESRB, this game contains comic mischief, fantasy violence, language, partial nudity and sexual themes. You should be aware that, while the original Hyperdimension Neptunia is rated Teen, mk2 is rated Mature. It features partially-naked women tied up in cords and getting massages, as well as a villain who's a pedophile and proud of it. He waxes poetic about "nubile maidens" in every appearance, shows lots of…"interest" in the child CPUs, and licks them at one point. Also, there's an alternate/optional ending that's pretty disturbing and violent.

Deaf and Hard of Hearing: You should have no problems. All dialogue and mission information is subtitled, and there are no significant auditory cues.