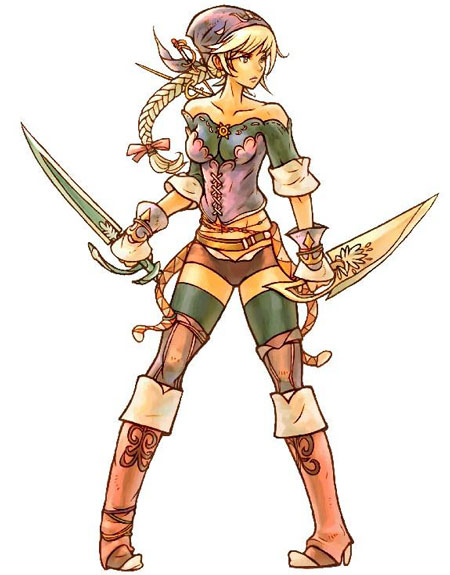 Heroes of Mana is a very pretty game. The opening anime movie looks like it's on television instead of a tiny screen a few inches wide. Hills pop out of the earth in three dimensions. There are rich colors and glistening mushroom caps. It's obvious that the developers put a lot of effort into the art direction and graphics. I only wish they'd worked a little harder on the game underneath all that eye-candy.

Like its sibling title for the PlayStation 2, Heroes of Mana is another iteration of the Secret of Mana series that changes genre entirely. This time around our hero, Roget, has to fight off the powers of darkness by commanding units and gathering allies. In other words, we've got a real-time strategy game (RTS), but it's not a very good one, I'm afraid.

The game has intriguing touches here and there. The map for each mission starts out completely in shadow; the only way to see exactly where enemies and items are is to explore the field. Reconnaissance is as important here as it is in a real-world war. There's even a unit that can't be attacked while moving, and is very good at scoping out terrain as quickly as possible. 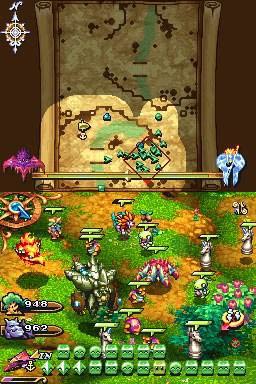 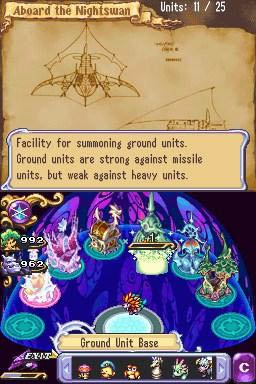 Also, players build unit bases with special Gaia stones around the field, and they need Treant berries to summon individual units. These items can be harvested by "gatherer" units such as yellow Rabites. Gatherers don't have much in the way of hit points or offensive and defensive skills, but they are one of the most important units in the game. In fact, I think I could've done a lot of damage if I took out my opponents' gatherer units as soon as possible. Too bad I could only find them when a mission tutorial pointed them out to me.

That's because I had only the most general sense of who did what to whom. I knew that heavy units were strong against ground units and weak against flying units. I knew that missile units were strong against flying units and weak against ground units. But there was no way to tell which of my opponents were ground units or heavy units. Sure, some missions pointed some of the enemy unit types out to show me how to use a new ability (“Look! Those are flying units! Send some missile units against them!”), but I had no way to find that information again if (when) I forgot it. Even pressing the X button to display icons of units on the field doesn't help, because it only tells me about my units—not my enemy's.

The end result is a strategy game where my best "strategy" was to send out as many different kinds of units as possible and hope some would do their job. Heroes of Mana quickly became a chore to play, and I avoided playing it for as long as I possibly could. While I could tell what two of my enemy’s units were–flying units levitated off the ground and missile units shot stuff at me—most of the time, it was a crapshoot to decide what units to bring where. Such aimlessness might be fun in an adventure game that lets players explore their environment to their heart’s content. But in something as tightly structured as an RTS, it feels more like conceiving a child than fighting a war.

Heroes of Mana feels like Dawn of Mana, take two. It's gorgeous and somewhat interesting, but undermined by basic flaws in its ability to let players see what's going on. Here's hoping there's no take three in the works.Rating: 3.5 out of 10