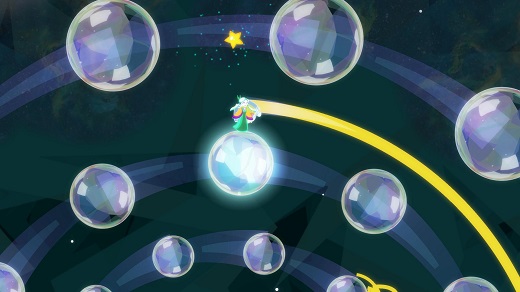 HIGH: The understated (but still neat) physics and non-stressful, challenging gameplay. The characters. Also, the music.

LOW: Wait-didn't I get those achievements?

WTF: Mazes are those things on neurological tests I always did really badly on. Why are they my favorite part of this game?

The titular character of Gravity Ghost is a girl named Iona who's floating through space looking for her fox-friend, Voy. To find him, she must collect stars to unlock doors and reunite animal spirits with their bodies by carrying the spirits in her hair and welcoming them to the afterlife with platitudes like "You'll get used to not pooping."

It's not as weird as it sounds.

Iona's universe is full of tiny planets. Some have a strong gravitational pull; some are covered in water that let her float through their center; still others are bouncy, and others still let her float even higher. She can also "terraform" planets into different element types by using her hair. (Don't worry—she can grow her hair back by collecting flowers in outer space.

Gravity Ghost is relaxing to play. Without timed stages or any enemies to speak of, the player can float around each level for as long as she likes without dying—a perk of being a ghost, I guess. (Ben Prunty's soothing soundtrack adds to the mood, also).

Not only does this freedom remove all stress from the game, but it encourages players to problem-solve. Without worrying about penalties, they're free to look closely at their environment, to try out all kinds of solutions that seem bizarre at first. (That looks suspiciously like a clock. What happens if I move the hands?)

Some solutions, notably how to rescue some of the animal souls, seem to involve luck and patience more than anything else—but even then, all the puzzles are fair. In fact, the puzzles are so fair that I was able to work through mazes, which I normally struggle with—and enjoy them!

Between unlocking doors by grabbing stars and escorting dead animals to the afterlife, Iona can also find new powers: the ability to double-jump or dash or fall heavily. She literally does find these powers, by the way—tiny balls called Geoms are trapped in mazes and pulled toward her as if she's magnetic. At first I dreaded these mazes, but once I figured out the basic physics involved in getting the Geom to follow me, they quickly turned into my favorite parts of the whole game.

Reuniting an animal's soul with its body unlocks a short scene from Iona's life while she was alive. Like animated chalk drawings, these sequences give Iona's life a story and a dreamlike quality that's both adorable and chilling. Iona herself is mischievious and funny, and these story bits always manage to raise more questions than they answer. I wanted to rescue all the animals just to see more of Iona's life and interactions with the people around her.

I've never played a game like Gravity Ghost before. There's no lose condition, but it made me think harder and more creatively than any other game. The story is deft and powerful, leaving me wanting more. It made me enjoy mazes, for goodness' sake. Rating: 9 out of 10.


Disclaimer:This game was obtained via publisher and reviewed on a Mac running Yosemite. Approximately 7 hours of play were spent in single-player mode, and the game was completed. There are no multiplayer modes.

Parents: This game hasn't been rated by the ESRB, but I'd rated it Everyone or E10+. The story is a tiny bit dark (the gravity ghost is a young girl who was once very much alive), but there's no violence whatsoever, and the highest sexual content is a couple preparing for their wedding.

Deaf & Hard of Hearing: You should have no problems. All mission information is presented with text and images, and the story is fully subtitled.

I pre-purchased Gravity Ghost last year, but haven’t gotten around to it yet. Based on your review, I need to rectify that soon. It sounds fantastic, and the creative puzzles should provide a lot of enjoyment. If a game can make mazes entertaining, then it’s done something right.

I am definitely going to buy this…
Looks interesting!