Rummaging Through Stuff Is Fun. Really. 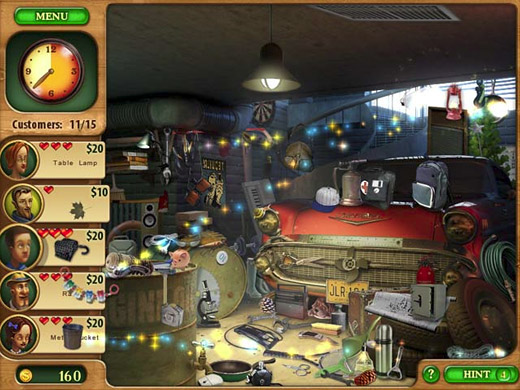 HIGH The graphics are pleasant, and the game hides objects in very clever ways.

LOW The garden-renovation elements are much too simple.

WTF Live cats and fish. Hidden in rooms amid junk. For sale.

In Playrix Entertainment's hidden-object game Gardenscapes, players are tasked with restoring a dilapidated garden. The nameless player character inherits a house and garden from her grandfather. Also inherited is Grandpa's bulter, Austin; he wanders around the garden, giving encouragement and advice about what to do next. Many times, this advice centers around selling Grandpa's old things to various townspeople, and using the money to buy upgrades for the garden: benches, fountains, stones for walkways, etc.

These "jumble sales" are the heart of the game. Customers arrive with requests Diner Dash-style. The player then has to find these hidden objects, which can be camouflaged very well. The faster these objects are found—and given to the customer—the more money the player makes.

I hadn't played a hidden object game before, and wasn't sure how well I'd enjoy scanning for things in a crowded virtual space. Yet, I found something strangely satisfying in finally realizing that, yes, there's a tiny handbell up in those rafters. Or an alarm clock peeking out from the bottom left corner of the screen. Or even that "cat" doesn't always mean "furry quadruped that meows"; sometimes it means "wooden sculpture of a feline." Players can use hints (and replenish their used hints by finding question-marks in rooms amidst the jumble of items), but the less hints they use, the bigger their cash bonus at the end of the day.

Sometimes I got letters from townspeople asking me to find all the wine bottles or books or newspapers in a room (say, 20); I liked these levels the best. They were faster and allowed me to focus purely on visual scanning rather than having to glance over to check what item I should be looking for next.

Gardenscapes is definitely a casual game. Its simulation attributes (i.e. the restoration of the garden) are not very deep at all. The goal of garden renovation—such as it is—is to win a garden contest by buying one of everything. There are only three variants of any one garden decoration—three benches, three fountains, three kinds of statues. I would definitely have liked to see this sim aspect fleshed out more. It doesn't have to be Gran Turismo in a garden, but more choices and more consequences of same would've been nice.

Still, I did not expect Gardenscapes to be as fun as it was. It wasn't long before I was asking myself: Can I get my day's sale done faster? Can I find things more quickly? Can I make even more money? While I usually play games with more complex rules, such complexity is not necessary, and Gardenscapes is very good at what it does. Rating: 7.0 out of 10.

Disclosures: This game was obtained via publisher and reviewed on the PC. Approximately six hours were spent in the single-player mode (completed 1 time). There are no multiplayer modes.

Parents: Although this game has not been rated by the ESRB,, it features no violence, nudity or bad language. Gardenscapes mostly involves hunting for hidden items, Where's Waldo?-style. However, some of those items are wine bottles, smoking pipes, and hookahs.

Deaf and Hard of Hearing: Gardenscapes is fully accessible. All dialogue and other important information is conveyed in text, and there are no significant auditory cues.

This game and Austin the butler look nice, but you’ll soon realise that this is an ordinary money grabbing machine.
It’s highly addictive and constantly funnelling you towards the purchase of extra lives and boosters. Amounts from 1 to 79 euro, and you will need these purchases to complete the ever more complicated levels.
One advise: protect yourself and don’t start….