Yet another trilogy of news related to game accessibility: 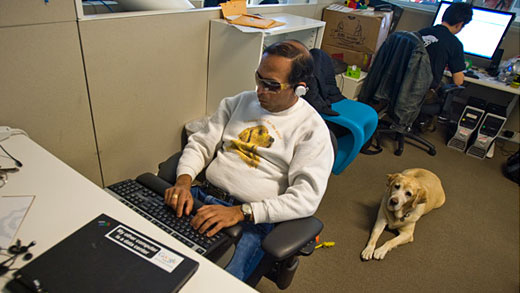 For the Blind, Technology Does What a Guide Dog Can't A profile in the New York Times of Google engineer T.V. Raman, who is blind and specializes in making technology accessible for people with disabilities. However, as Miguel Helft writes in the article: "Instead of asking how something should work if a person cannot see, he says he prefers to ask, "How should something work when the user is not looking at the screen?"

In Truly Innovative Controllers For Disabled Gamers, Stew Shearer of The Game Reviews interviews engineers like Mark Felling and writes about some interesting accessible controllers in history, including Nintendo's sip-and-puff Hands Free Controller from 1989.

Not a news story, but still neat: 7128 Software, which makes games for people with disabilities, hosts a color chart that can aid in developing software that's accessible to people who are color blind.