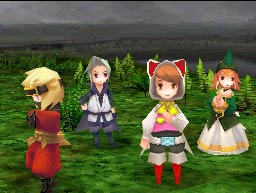 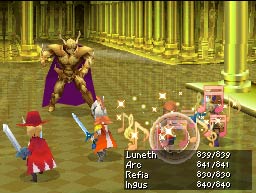 Parents should feel safe letting their older children play Final Fantasy III. While some of the female characters wear dresses that are a little low-cut, there's no obvious sexual innuendo and no bad language. The game's violence is typical sword-and-sorcery stuff—nothing realistic or graphic. (The "mild blood" is nothing more than occasional red pixels that are easy to mistake for something else). Like most role-playing games, FFIII requires a lot of reading to play; youngsters who haven't mastered that skill will be frustrated with the game.

Nintendo Wi-Fi Connection fans—especially those without a lot of Friend Codes—will probably be disappointed. Wi-fi is only used for writing letters to friends via Mognet. Sending letters unlocks uber-weapons and secret jobs, which is a bummer if you don't have enough friends to get them.

Deaf and Hard of Hearing gamers should have no problems. All speech and important information is presented in text.