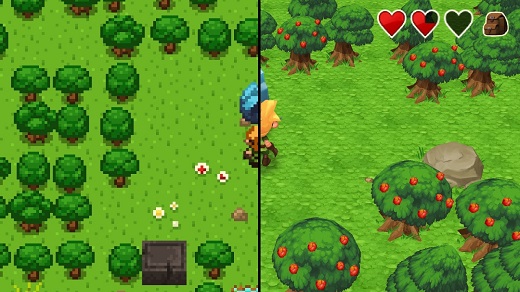 WTF Why aren't I out of this cave yet?

Shiro Games has done something really, really cool with Evoland 2. In fact, it's something that I would've assumed was impossible—it made me feel like I was experiencing previous technical and intellectual video game innovations for the first time all over again. In its best moments, it understands not only the why of how its puzzles work, but the when—how certain things were only possible when 3D was the New Big Thing, for instance. Unfortunately, that level of brilliance isn't often repeated.

When the game begins, our heroes Kuro and Fina are checking out the sudden influx of monsters in the 16-bit forest near their village. They soon stumble into a magical rock formation called a Magilith that transports them to an 8-bit forest that looks just like theirs. How did this happen? And more importantly, how can they get home?

These are standard RPG-involving-time-travel questions, but it's the answers that make the game unique because Evoland 2 is a video game about video games, and the developers bring that history into the present.

I saw this quality most clearly in a dungeon early in the three-dimensional period. With the camera placed overhead, players must walk over deadly spikes while wearing a suit of armor. It's the kind of puzzle that we saw a lot of in the Nintendo 64 era—just being able to move in three dimensions opened up previously-unrealized possibilities and engaged players' minds in new ways. Of course, this use of 3D is primitive by today's standards, yet Evoland 2 filled me with a wow-look-what-this-newfangled-3D-stuff-lets-me-do! joy that I haven't felt in years.

While seeing 3D with renewed eyes was great, not all the feelings Evoland conjures up are pleasant. Among its faithful renditions of puzzles from gaming's history are things I've always hated—bits like aiming mirrors to bounce light off them in a specific way, aka The Reason I Never Finished Tales of Symphonia. Other ‘joys'? Footholds that appear and disappear, herding animals into exactly the right spots, and bouncy platforms in rooms full of Spikes of Insta-Death.

The absolute worst, though, was when I had to solve six such puzzles in a row while Kuro and company were hunting down information about Magiliths in a secret library. At this point, a bunch of academics offered credits for solving problems that require spatial abilities I just don't have. If two comets are flying toward each other and they can only travel diagonally and without passing through any stars, what square will they meet in? Is this a video game or a math class? Thanks to systematically choosing every possible answer and sheer dumb luck I finished them all.

Apart from replaying the kinds of puzzles that I never wanted to see again, Evoland 2 feels too long. Its shoot-‘em-up portion is about as long as an actual shmup, and someone thought it was a good idea to combine a best-of-three-rounds fighting game with Square-Enix's penchant for multi-form bosses. Annoying doesn't begin to describe it.

While Evoland 2's trip through video game memory lane made me feel like a kid again, the high points are outnumbered by the times I muttered "Ugh, one of these." Nostalgia can be great at times, but but most of this stuff is better left in the past. Rating: 4 out of 10


Disclosures: This game was 29 hours of play were spent in single-player mode, and the game was not completed. There are no multiplayer modes.

Parents: This game hasn't been rated by the ESRB,, but I'd rate it E or E10+. There's no nudity, no salty language, and the only violence is whacking cartoony enemies with a sword. There are themes of war and genocide (e.g. by the time the story starts, all the demons have been killed in a war with humans), but there's nothing graphic.

Deaf and Hard of Hearing: You should have no problems. Evoland 2 is largely inspired by RPGs of the 8- and 16-bit era. Fittingly, all mission information and dialogue is presented in text, and there are no significant auditory cues.