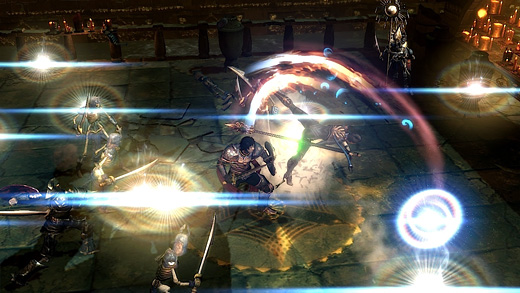 LOW: Almost everything and everyone else.

WTF Lucas Montbarron, your father has been murdered. Shouldn’t you have feelings about that?

. Hunting for monsters and better armor are two of my favorite things, and Obsidian's hack-and-slahser fits plenty of both into a story more complex than Diablo II's.. (Granted, that bar isn't set very high). However, while the Diablos and Torchlights can keep me left-clicking for hours, Dungeon Siege III didn't hook me at all. It's a pretty game with a decent enough combat system, but after finishing it I have no desire to play again.

Perhaps the story's complexity is part of the problem. The land of Ehb is rent with political and religious strife; "Saint" Jeyne Kassynder and her armies are attacking the kingdom, and the only hope of saving it are members of the 10th Legion. Unfortunately, these armies have decimated most of the Legionnaires and, to top everything off, the Legion may or may not have killed the King thirty years ago.

It's the kind of story that's supposed to encourage deep moral pondering, but what actually happens is that players are asked to kill people or spare them. Sometimes their answers to non-player characters gain "influence" with their AI partner, but I'm not sure how this influence affects the game. In fact, I don't know how any of the decision-making elements affect the game, apart from a few cut-scenes and possibly the ending, which is displayed rather flatly in still images and narration. All the branching dialogue trees do is try to make the plot seem more complicated—and better—than it really is.

Player choice that feels tacked-on and shallow is nothing new, of course. I could forgive the developers' "all roads lead to Rome" approach if the characters they forced me to talk to were actually interesting. In attempt to give the story gravitas, the voice acting is all very serious—and by "serious," I mean "monotonous." The script is equally lackluster. For instance, my character's father had been murdered before the story started. Was he questing to avenge his death? I can't tell you. The rest are little better.

The one bright spot in the cast is the magician, Reinheart Manx. As a scholar, he's excited by new types of magic and rock formations. As a funny old man, he makes offhand comments about death. (He can even do both at once: "Scholarship waits for no man's naptime!") His voice actor infuses his lines with cheer and wisdom, and I spent as much time with Reinheart as I could. Unfortunately it wasn't as much time as I would've liked, since he was the last party member I met.

Another breath of fresh air? Dungeon Siege III's map system. If I track a quest, I can turn on a guide of yellow dots to point me in the right direction. This feature isn't forced on players at all, and is easy to turn off and on. When all I want to do is kill things, it's nice not to have think about where I'm going. My sense of direction and I hope to see more maps like this.

While the map was neat, the core of the experience—the combat—had problems. Killing enemies is more awkward than I'd like. Attacks are mapped to the four face buttons and using defensive attacks requires us to hold the left trigger button before we can employ them. Using a skill enough times unlocks its "Empowered" version, which is accessed by holding the right trigger button first. If I want to use an empowered version of a defensive skill, I have to hold both triggers at the same time, while also pushing the face button I want. This inelegance (to say the least) may come from trying to shove keyboard-and-mouse controls onto two analog sticks and buttons. At any rate, it adds to the sense that Dungeon Siege III is more complicated than necessary, and I spent most of the game mashing the X button.

is a morass of flat characters, a story as dull as dishwater, and combat that manages to be both frustrating and boring. I don't hate it—the game isn't that good at inspiring strong feelings, except in the case of its final two bosses—but it's 20-odd hours I'll soon forget. Rating: 4.0 out of 10.


Disclosures: This game was obtained via publisher and played on the PS3. 20 hours were spent in single-player mode (completed 1 time). No time was spent in multiplayer modes.

Parents: According to the ESRB, this game contains: blood, mild language, mild suggestive themes and violence. Although some attacks cause bleeding and even offer bonuses when used on bleeding characters, the ally and enemy assets are so small that it isn't very graphic. Teens should be fine.

Deaf and Hard of Hearing: All dialogue has subtitles, and there are no significant auditory cues.

I can definitely agree with the dull story and characters. Not sure about you, but my story cutscenes didn’t have any voiceover at all.

However, I actually had a great time playing with one of my friends. Co-op really adds to the gameplay. I would recommend trying it sometime.

This is a strategy RPG the more whoever develops it forgets that the more it will suck. DS 1 great almost perfect! DS 2 so so to actiony DS3 crap.