Frayed at the Edges 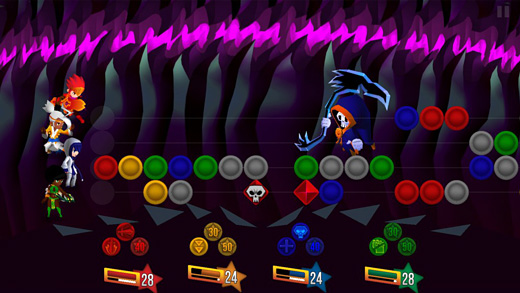 HIGH Pulling off a screen-clearing, game-changing combo is especially awesome when lives are on the line.

LOW Matching three chargers into an attack gem…right before it hits the edge of the screen and disappears. (This happens a lot.)

WTF I have enough power to use the Fighter's super move on this dinosaur twice! WHY WON'T IT DIE?!

Christopher Pavia makes games—"colorful, small, and highly polished games." He is the sole full-time member of developer Cube-Roots, which has just adapted their iPad game Dungeon Hearts for PCs and Macs. The game follows four heroes (a fighter, a healer, an archer and a mage) as they fight the minions of a mysterious entity known only as The Dark One. It may sound pretty standard for a role-playing game (RPG), but it strikes out on its own.

Each stage is a battle between the heroes and one monster. Players attack enemies by creating differently-colored gems called "strikers"—red, blue, green and yellow, each color representing a hero. Unlike a typical Bejeweled-style board where gems wait patiently to be swapped, strikers and the elements that create them barrel fast and furious down a "fatestream" toward the left edge of the screen. As with any puzzle game, achieving combos is key to staying alive. This time, it's also the means of saving the world.

Part of why Dungeon Hearts works is its scope. It is indeed a small game, and that's why the story works so well. It doesn't deluge players with huge chunks of plot; those looking to find out more about these characters and their special abilities can check the Bestiary. However, the catchy music and Pavia's colorful character designs provide plenty of unspoken narrative. The score also provides a sense of urgency, momentum, and of something greater than the four little people on the screen. Sure, some of the characters are adorable and the game never takes itself too seriously, but there is always a sense of adventure.

Considering that it was originally built for the iPad, the game is meant to be played in short bursts. Still, it feels long—fighting monsters even for ten or 15 minutes can get tiring. The more heroes that attack the monster at once, the higher the damage multiplier. While there's a tight, violin-string thrill in making the screen explode in multicolored lasers, players who haven't learned to set up combos regularly (and even those who have) will get worn down by the long battles, not to mention that the longer a fight takes, the faster the fatestream moves.

Immobile gem elements, enemy chargers that block one's way, hexes and enemy attack gems (some that take two or three hits to destroy) can get overwhelming pretty quickly. On Normal difficulty, the challenge skyrockets between battles six and seven. This difficulty spike wouldn't be so bad except that there are no checkpoints. Gamers can save and quit at any time while playing, but will go back to the beginning when they die. Because of this, the game can get disheartening if one 15 minutes multiple times just to die in the same place over and over again. Thank goodness for Easy mode.

Dungeon Hearts may be a small game, but it's a lovingly crafted one. Even so, with the boss rush structure and being sent back to the start when I lose, it ended up feeling more like huge, sometimes grueling, undertaking. Rating: 5.5 out of 10.


Disclaimer: This game was obtained via publisher and played on a MacBook Pro running OS 10.6.8. Approximately 15 hours were spent in single-player mode on Normal difficulty and two hours on Easy difficulty. The game was not completed. There are no multiplayer modes.

Parents: The ESRB hasn't rated Dungeon Hearts, but I'd guess it's appropriate for all ages. The fantasy violence is tamer than one would find in most Saturday morning cartoons and there's no salty language, nudity or sexual themes. (The female archer wears a bikini, but that's it.)

Deaf and Hard of Hearing: You should have no problems.There's no story or dialogue, and no significant auditory cues. Also, there's a mode for colorblind players. Among other things it puts a purple hand over the cursor, and is useful for players with other types of visual processing problems (like me.) Dungeon Hearts is fast-paced, challenging, and accessible.