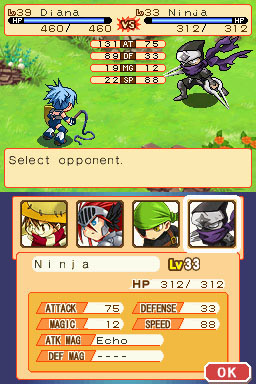 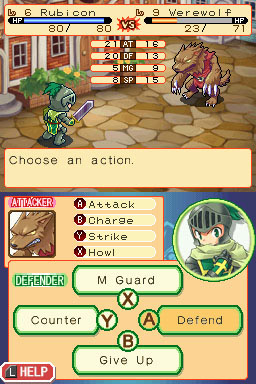 HIGH "All of Tera's towns are so impressed they're giving money!"

LOW Being one space away from a doorway and spinning a two. Then a four. Then a six.

WTF The walking undead should not make me go "Awww!" and want to pinch their cheeks.

Dokapon Journey is a cute little game, and therin lies its poison sting. The magical girls, giant pigs and wide-eyed zombies sucked me in before I realized just how brutal the game is. Equal parts board game, RPG and Battle Royale, it's a four-player free-for-all that delights in turning friendships and genre conventions on their heads. (Publisher Atlus calls it a "friendship-destroying RPG"). The story, such as it is, concerns a kingdom called Dokapon whose towns are under siege by monsters. The King hires four heroes to send the monsters packing–"hires" being the key word here, because this game is all about the Benjamins.

The four heroes in this sibling title to Dokapon Kingdom on the Wii have only one goal: to make money. Their world is a game board, and they move with the aid of a spinner. If one hero lands on another's space, s/he can fight them like any monster and the winner can take the loser's items, towns, money, equipment, or name. Players can also attack each other from afar with lighting bolts, meteors, poison and other magic spells. Each character has a job that the player chooses—fighter, spy, a couple flavors of mage—but most don't seem different from each other. Spells are bought from shops instead of learned, and players have lots of control over their stat points when they level up. Since all the characters are evenly matched, the only way to win is with skill and luck.

There is one very Faustian way to overpower everybody else. If a player goes to a certain island, he or she can choose to give up all items, money and towns to become a Darkling for a month's time in game. Darklings have horns, and quintuply-multiplied spinners and stats. The only way to cope with a Darkling is to stay the heck out of the way until its contract expires. 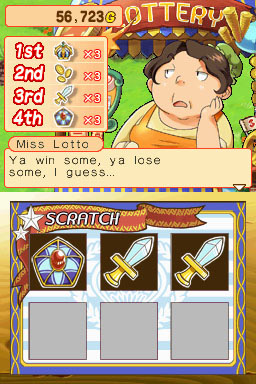 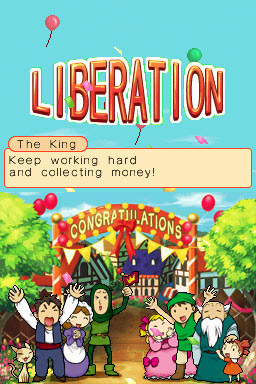 Appropriately, the fighting system is simple to understand yet difficult to exploit. Each battle is divided into "Attack" and "Defense" turns. (Face-down cards and luck decide which one the player chooses first). Each player has three basic attacks: a magic spell, a basic attack and a Strike, which does the most physical damage. There are defensive moves to deal with each one: "Magic Guard" absorbs spell damage while Counter reflects Strike damage back at the attacker. Picking a favorite move and spamming everyone with it is a surefire way to get beaten to a pulp.

Although there's not much plot to speak of, Atlus' trademark humor and excellent translations are on display here. To supplement their monster-hunting, the King sends the heroes on quests that are petty and materialistic: to find a dress for his daughter to wear to a party, or a ring she can show off at the mall ("One Ring to Rule the Mall"). On the one hand, these quests are perfect for a game that's a four-way ego contest. On the other, they're commentary on the dissonance between many RPGs' high-minded morality and the selfish reasons we play them. We spend hundreds of hours with a Final Fantasy or a Tales so we can get the best spells and equipment, not to save the universe. The (adorable) characters in Dokapon Journey have the same raison d'être. When they defeat (equally adorable) monsters who’ve seized towns, these towns—and their net worth—now belong to the heroes. Free from the weighty moral and personal questions that most role-playing games ask, players can get down to business and take each other's stuff.

Unfortunately, I had to play Dokapon Journey solo, which is not the way it's intended to be played at all. Competing against computer-controlled characters is much more possible than in, say, Left 4 Dead, but the A.I. can be vicious. Even on the weakest setting, the CPU characters did not seem to play fair. While I often kept rolling threes and fours when I was one space away from my destination, everyone else's spinners seemed to do exactly what they needed. The game isn't compatible with Nintendo's Wi-Fi Connection, so the only way to get the multiplayer experience the game was built for is to find two or three friends—or siblings—each with a DS. Luckily, the game supports single- and multi-cart wireless play, so not everyone needs a copy of the game.

Like many Atlus titles, this isn't a game for everyone. Lone players can enjoy the colorful art, the humor and some of the table-turning ruthlessness, but Dokepon's journey is meant to be taken with friends. If you can find three friends with DSs, Dokapon Journey is an enjoyably chaotic way to test the bonds of friendship. Rating: 7.0 out of 10.

Disclosures: This game was obtained via publisher and reviewed on the DS. Approximately 20 hours of play were devoted to single-player mode and the game was completed one time. No time was spent in multiplayer modes.

Parents: According to the ESRB, this game contains Mild Fantasy Violence, Mild Suggestive Themes and Simulated Gambling. The violence is totally bloodless, sword-and-spell type stuff. Sometimes players can scratch off lottery tickets to win prizes like armor and weapons, which is what I guess the "simulated gambling" warning is about. As for suggestive themes, I don’t know what they could be. The king's daughter likes dresses, parties and malls; she's also a marryable "prize" for a worthy hero in the end, like many fairy-tale princesses before her. (Even for female heroes, which may be where the warning comes from). Dokapon Journey should be fine for pre-teens to play.

Deaf and Hard of Hearing: You should have no problems. All dialogue and mission information is presented in text, and there are no significant auditory cues. I played most of Dokapon Journey with the sound off, and had no trouble at all.