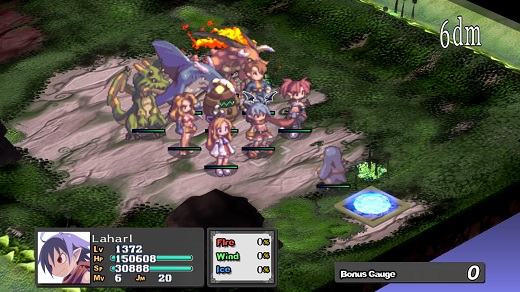 HIGH The humor and likable characters

LOW I miss the sequels’ enhancements that make grinding easier

WTF I miss the sequels’ enhancements that make it easier

Disgaea PC is the definitive version of the first game of Nippon Ichi’s flagship series, originally released domestically in 2003. It’s a faithful port with most of the extras from Disgaea DS (the optional maps and unlockable characters) plus the full English and Japanese voice acting from the PSP port Afternoon of Darkness. As such, it’s a good choice for people who’ve always wanted to play Disgaea but never picked it up—especially if they haven’t played any other games in the series. However, for someone who’s spent time with several sequels, the demon-themed strategy RPG that started it all is showing its age.

For those who don’t know, Disgaea is the story of Laharl, Prince of the Netherworld. He’s trying to be a good Overlord after the death of his father, the King. Murder is an essential part of demon politics, so Laharl protects his title by slaughtering all the other demons who want his job. Those who respect his power join the party upon defeat, whether Laharl wants them to or not. He’s “helped” by his vassal Etna, who makes no secret of wanting to kill him, and an angel named Flonne who was sent to assassinate him.

Despite all the murder, Disgaea is really about love—I’ve always enjoyed Flonne’s indomitable kindness, and her belief that demons are able to love and deserve love in return, even if they express their feelings in ways she doesn’t understand. Is it true that demons are inherently evil and angels are inherently good? The game aims to answer this question.

Mechanically, Disgaea is a turn-based strategy RPG that encourages players to become as powerful as possible, and to survive the enemies on every map, players will need to take the terrain into account.

Attacking from behind or above an enemy gives an advantage, while different-colored “Geo Panels” on the ground might provide positive or negative effects. Standing on a Recovery panel grants a character health every turn, while a Silence panel won’t let them use magic. A lot of strategy involves making the Geo Panels work for players, including getting rid of them altogether, dominoes-style, which grants huge bonuses, can attack all enemies, and doing so looks pretty, to boot.

Speaking of power, the level cap for characters is 9999, and players can eventually reset them, which reduces them to level one but increases their stats. If that weren’t enough, players can also strengthen weapons and equipment by diving into “Item Worlds” which are randomly-generated dungeons separate from the main campaign.

New players scared off by the potential for grinding in these systems should know that it isn’t necessary for finishing the main story. However, Disgaea’s post-game has always been a game in itself; those who want to experience all the bonus dungeons and bonus bosses will spend a lot of time leveling everything up.

I have a pretty high tolerance for repetitive grinding, and I can enjoy it, but I found myself missing the enhancements from Disgaea‘s sequels that made grinding less time-consuming. I often wished I could stack characters in a tower and have them share experience points, or fiddle with how much experience my character gets for defeating them as some later installments allow.

Is it fair to hold the original Disgaea to standards set by more recent games in the series? Of course not, but the fact that these tweaks are absent exposes flaws which were corrected in the original’s gameplay, and makes this re-release a bit too faithful to the original. Since I’ve experienced “easier” grinding, I found going back to Disgaea frustrating the second time around.

However, the story of a half-human demon overlord, his murderous vassal and the angel assassin who taught him to love is as funny and heartwarming as it ever was. Sure, there’s no new content, but Disgaea PC is still the definitive version of this game. New players have access to all the important extras, and as for those of us who’ve played the DS and PSP ports, we can now show off to our friends with Steam Achievements. The grinding is more of a pain now than when it was first released, but I’d still spend several hundred hours with it all over again. Rating: 7 out of 10

Disclosures: This game was obtained via publisher and reviewed on a PC running Windows 10. Approximately 150 hours were spent in single-player mode (main story completed 1 time.) There are no multiplayer modes.

Parents: The PC port of Disgaea has not been rated by the ESRB, but other versions of this game contain: mild blood, mild fantasy violence, mild language and suggestive themes. There’s talk of “sexy bodies” and jokes about breast size—teenagers should be fine.

Deaf and Hard of Hearing: All dialogue and mission information is presented in text; I played Disgaea PC with the sound off and had no problems. It’s fully accessible.

Remappable controls: The game cam be played with either a keyboard and mouse or a controller, and the controls are fully remappable.

Colorblind modes: There are no colorblind modes; the different-colored Geo Panels may cause difficulty for players with colorblindness, as they can have both positive effects (like granting an extra attack) or negative ones (like only damaging player characters.)