The Family that Slays Together… 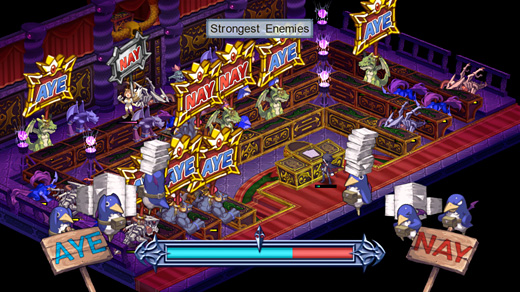 HIGH Disgaea is still as funny as ever.

LOW It's also just as repetitive, which started to wear on even me when I got stuck.

WTF Using a giant monster as a weapon..

"Lord Val… is being undermined by these fools with stupidly strong personalities."

Even after finishing the main game, there's so much stuff I haven't done. Unlocking extra maps. Recruiting all the bonus characters. That Nippon Ichi shared universe–specific bragging rights milestone, leveling someone to 9999. But most of all, I want to collect all the "epilogues"—special endings for each story character—because Valvatorez and his motley crew are so great that I can't get enough of them.

Who is Valvatorez? He's a vampire and once-upon-a-time tyrant who now trains the penguin-bat-shaped souls of the dead known as Prinnies. He takes his job very seriously, so when someone wants to exterminate his charges, Val and his werewolf-servant Fenrich must investigate. Along the way, they meet the son of the Netherworld president, a girl in a Prinny hat (budget cuts, dood) who refuses to believe she's dead, and a final boss who needs more practice. What follows is a story rich with political intrigue, genre savvy, fourth-wall breaking and, of course, love.

How does this father-figure express his love? By killing everyone who stands in his way.

Like previous games in the series, Disgaea 4 is a turn-based strategy role-playing game (RPG) wherein the goal is to do as much menu-based damage as possible. Everything (and I do mean everything) gains experience and stats: characters, yes, but spells and equipment, too. It's even possible to turn characters into equipment by wielding monster-class creatures as weapons. Players can even fuse two monsters together into a giant and then use that as a weapon. Is it ridiculous? Yes. It also makes the task of leveling up the monster less daunting. As a stronger character's weapon, a monster can kill things far beyond its power. Also, both characters get the full amount of experience points.

I spent a lot of time turning one particular character into equipment—Desco, a moth-serpent-girl who was literally designed to be a weapon. Her storyline is by turns hilarious and heartbreaking. I especially loved her relationship with the girl in the Prinny hat, whom she calls "Big Sis." Desco is so funny and scary and lovable that I wanted to do my part to help her become the most formidable final boss ever. This same protectiveness extends to all of Valvatorez's funny, obnoxious, awesome, abandoned children. Yet, they are all demons with different cultural values than humans, capable of cruelty, manipulation and wanting to take over the world. Even Lord Val shows love for all creation by wanting to "turn all worlds into Hades"—that is, to punish and train us until we stop acting like fools. Disgaea 4: A Promise Unforgotten is about the families we make: argumentative and imperfect, but still the families we need.

Of course, raising a family—even a chosen one—is hard work, and it's easy to feel like the player isn't getting anywhere. This happened to me somewhere in chapter five. Faced with two rifle-demons, my  "take dude with sword and kill all the things" plan suddenly stopped working. (Yeah, I don't know why I play strategy RPGs, either). The rifle-demons leveled up every turn, they were on invincibility panels that rendered them immune from harm, and worse, were protected by a force field that kept them in and me out.  More levels weren't enough to fix the problem—the more time I wasted, the stronger they got. Eventually I found a way to quickly dismantle the force field, but not before passing a bill in the Netherworld Senate that turned wimpy Prinnies into level 55 fountains of sweet, sweet experience points.

In fact, one of my favorite things about Disgaea 4: A Promise Unforgotten

is that there are multiple ways to do the same thing—I'd read a puzzle's solution in an FAQ only to do something else entirely. Remember those rifle-demons? Supporting them are archers whom the Internet warned me to take out first; I solved the puzzle, in part, by leaving the archers until the end. If I have a favorite level-grinding map that I suddenly "outgrow," I can lobby the in-game Senate for stronger enemies. Or, I can capture enemies by throwing them into my base and create my own custom map. In other words, Disgaea 4 continues the tradition of letting us play our own ways while rewarding us for doing the same thing over and over again. As "hardcore" as these games are, developer Nippon Ichi makes them playable in lots of different ways. Perseverance, ingenuity and even failure are all rewarded. Like the members of Valvatorez's ragtag team, Disgaea 4: A Promise Unforgotten makes room for all kinds of players. Rating: 8.5 out of 10.


Disclosures: This game was obtained via publisher and played on the PS3. Approximately 113 hours were spent in single-player mode (completed one time). No time was spent in multiplayer modes.

Parents: According to the ESRB, this game contains: animated blood, drug reference, fantasy violence, language, suggestive themes. The main characters are lovable antiheroes who want to save the world by taking it over. They can bribe other demons with liquor, and one of the Prinnies says something about growing "a third leg, dood." Teen sounds like a fair rating to me.

Deaf and Hard of Hearing: You should have no problems. Battle is menu-based, all dialogue is subtitled (except for the opening anime cut-scene/music video), and there are no significant auditory cues.