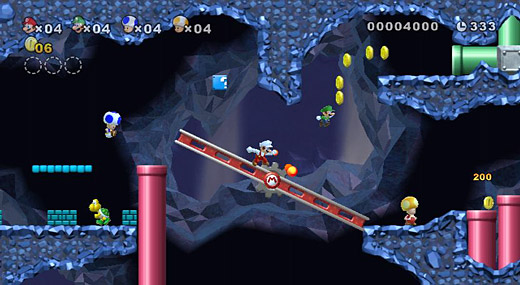 Nintendo's Demo Play feature will allow frustrated players to make a game "play itself" out of trouble. Set to debut in New Super Mario Bros. for the Wii, rumor has it that Demo Play will come to Nintendo DS games as well. While I think this feature would be great for skipping the boring or poorly-designed bits of a mostly-good game, some people wonder if games getting their own players "unstuck" is the end of gaming as we know it. Others point out that this feature may be very useful for players with disabilities, who may find parts of a game completely impossible. Hearing- impaired Tales of Phantasia fans could've benefitted greatly from a mode like this. The game doesn't rely on any auditory cues except for one sound-based puzzle. The option to skip it would've been nice.

While I certainly like a challenge, occasionally a game presents me with something I absolutely cannot do, whether because of my disability or my general incompetence. Here are a few titles where Demo Play would've come in really, really handy:

Tales of Symphonia: This game was my introduction to the Tales series, and I loved it. Really. But after hours of infiltrating Desian work camps and discovering new angel powers, I just couldn't play it anymore. In a room filled with crystal boxes (prisms, perhaps), protagonist Lloyd has to turn these boxes so light reflects off them to Make Something Happen. I've done similar puzzles, but my spatial disability made this one so confusing that even when I found a picture of how to line the boxes up properly, I couldn't tell why it was correct, much less how to replicate it. The game had been really fun up to that roadblock, but this puzzle seemed so difficult that I couldn't see myself playing it again, and erased its save data when the rental week was up.

The Legend of Zelda: Phantom Hourglass: I spent months trying to sail just the right pathway to the Isle of Gust through the fog. Honestly, I couldn't see what I was doing wrong; that may have had to do with with my spatial disability, or it may have been the game's unforgiving viciousness. I did it eventually, but not without some help from a video walkthrough.

Conker's Bad Fur Day: Rare's story of a foul-mouthed squirrel's "morning after" is my greatest gaming shame. Not because it's endeared itself to me despite its many flaws, but because I've been playing this game since it was fairly new—for the N64—and have yet to finish it. Why? For years I've been lava-surfing against money-stealing punks. Longer than I've been writing for GameCritics, even. At one point, I spent several hours a day just trying to win this race:

(Someone who can actually do this. In other words, not me).

This infinite loop of awfulness has traumatized me for life. My second thought on finding a similar race in Star Fox Adventures was, "Well, that's $20 wasted." (My first thought was "F&%!). I did manage to struggle past it (God knows how). No improvement in my Conker skills, however.

Come on, people. I can't be the only person who's been stymied by a game… or three. Fess up: what are your personal bugaboos that Demo Play would have been nice for?

The Demo Play feature sounds like it could be very useful for certain people, and I have nothing against it per se. However, I would be concerned if Nintendo or some other publisher made it a requirement in all of their games. Depending on the game, developing the AI for a feature like that could easily consume a significant portion of development money and time. Perhaps a different approach, such as allowing the player to skip levels or get a limited number of free passes to use on puzzles, would be easier and less costly.

It’s easy for us that aren’t disabled to take for granted things that a disabled person can’t do. Anything that broadens that list of options is a good thing. Besides, I don’t really see the big deal with demo play. When I was a kid, you knew that there were cheat codes to get you ahead, but if your “really” wanted to beat the game, you had to do it without them. Also, Nintendo has always included shortcuts and other toys to cut the length of their Mario games, so I don’t see how skipping levels by letting the CPU… Read more »

Great article 🙂 My mother suffers from a disability that causes her some problems with certain games so I’m hoping demo play could really help her also.

I remember that level in Conker’s Bad Fur Day and how much it sucked when I first played through the game. I know what you mean about it being a pain. Probably had to play through it a couple dozen times before finally passing. Love the game, but agree, that level sucks.

Resident Evil 4 for definite. When the ammo was probably just too low and I was up against some giant ogre thing after trying 10 times to defeat it – demo play would have been a readily accepted gift! Although I doubt demo play could even have got through without itself cheating.

I would have loved to have Demo Play for Phantom Hourglass, too–going through that one dungeon over and over was a huge pain!

There are a bunch of games I haven’t finished because I’ve gotten stuck. A boss in the middle of Odin Sphere and the final bosses of Shadow of the Colossus and Lost Kingdoms come to mind. It would be nice to get through those parts and finally see the end of those games!