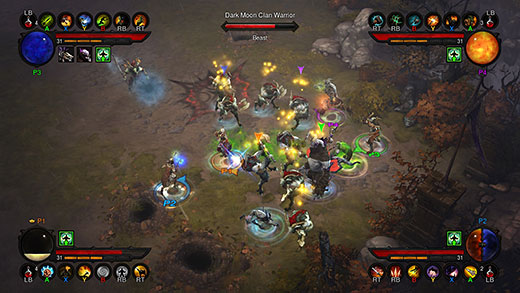 LOW Getting my Hardcore Wizard to level 10…and dying.

WTF This is a game about keeping demons from overrunning Earth. I'd be disappointed if it weren't firmly in WTF territory.

I'm not much of a PC gamer. Aside from my penchant for Mac computers, I'm more comfortable maneuvering a small digital person with a controller rather than a keyboard and mouse. Yet, hack-and-slash classic Diablo II lured me with its siren song of simple controls, a constant stream of loot, and violence. (No, really. I like violence. Why are you laughing?)

While I appreciated the combat system's click-click-click-clickety-clack and the gore, I still missed the feel of a controller in my hands. Plus, I never got used to the whole "allocate your own skill points" thing. After all, nine-year-old me was overwhelmed by the open-endedness of Mega Man.

on the PlayStation 3, which is the introduction to the series I wish I'd had.

To be honest, the console version is probably the Diablo III that PC gamers wish they'd had. It fixes a lot of stuff that never should've been broken in the first place. The auction house, the need for an always-on Internet connection in single-player mode, and the massive server problems that Darren criticizes in his review are gone.

As he also points out, the game does away with the do-it-yourself skill points, granting skills in a set order instead. No longer can I get stuck after raising an Amazon for 30 levels, realizing I built her "wrong" and having no idea how to fix my mistakes.

Does removing these elements of player choice also take away some of the game's challenge? Sure. But it also makes Diablo III less intimidating for players like me, who don't want that kind of power.

The game constantly, helpfully urges me forward. When I die I can usually respawn at my corpse, so there's no real loss of progress, no need to retrace my steps over and over again. Those who want to grind for levels and loot can replay quests they've finished, but I only needed to backtrack like this once and was happy to keep moving ahead. All this momentum adds to the feeling that one is an uber-powerful demonslayer, an unstoppable force of justice.

…Grenade-bombing hordes of monsters with my Witch Doctor helped reinforce this feeling a lot, too.

Still, in the end, Diablo III

is like candy. Killing things and getting random equipment is a rush, but otherwise, there's not much of substance. The story is just an excuse for demons to overrun the Earth, the characters are flat and combat gets repetitive quickly. On the one hand I kept playing to chase the rush; on the other, once I stopped playing, it was hard not to notice that Diablo III hasn't stuck with me at all. Rating: 6 out of 10


Disclosures: This game was obtained via publisher and reviewed on the PlayStation 3. Approximately 75 hours were spent in single-player mode, and four hours in multiplayer modes. The game was completed.

Parents: According to the ESRB, this game contains: blood and gore and violence. This game is about demons from Hell invading the Earth; there are dismembered heads and human sacrifice. Nevertheless, the graphics aren't terribly detailed and while enemies explode into bloody chunks, they're pretty low-resolution bloody chunks. The female characters outfits can be revealing, but there's no sex or salty language.

Deaf and hard of hearing: I played the whole game without sound and had no problems. There are no significant auditory cues and most speech has accompanying text–including the books of lore found all over the place, which the player can read in the Inventory screen under the Lore tab. Some walking-around-speech is uncaptioned, but that doesn't affect gameplay.