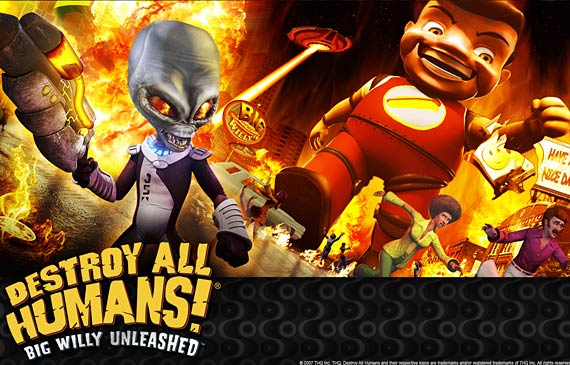 After playing the original Destroy All Humans!, I thought: “You know, if the physics didn’t hamper the graphics so much, this game would be awesome.” Like the B movies it pays homage to, Pandemic’s twist on the alien invasion subgenre is endearing in its imperfection. Our “hero” is a crinkly gray blob who’s obsessed with sex. The humans are more annoying than he is, spouting the same 1950s pop culture references over and over again. And yet, there was something likable about all this awfulness, something that fit with the awfulness of being the invading aliens I was used to fighting off. But two sequels, 20 game years and a new developer later, the same flaws are still there and I’m just not amused by them anymore.

Destroy All Humans!: Big Willy Unleashed finds Cryptosporidium and his hologrammatic boss Orthopox in the 1970s. Pox’s new plan for world domination involves owning a hot dog megachain called Big Willy’s. (The secret ingredient is people, of course: “What do you expect me to do with all the dead humans you leave lying around, Crypto?”). While Pox is busy being CEO of the most unfortunately-named company ever—jokes about “expanding my Big Willy” and not letting people “get their hands on my Big Willy!” abound—Crypto’s doing all the grunt work. 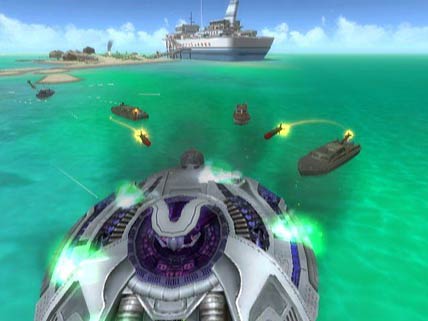 At other times, Crypto hops into his saucer and blasts people and buildings with his heat ray. Razing buildings to the ground—complete with satisfying crush sounds as said buildings collapse—spices up the more traditional run-and-gun combat. Perhaps the joy involved in mass destruction is why Crypto can also ride in the Big Willy’s mascot, a huge, cherub-cheeked toddler with overalls and a powerful heat beam. The only problem is that Willy is battery-powered, which means that the player has to recharge him often with the Zap-O-Matic electric ray gun.

I’d found the original game’s controls a little awkward, so I was hoping the Wiimote’s point-and-shoot simplicity could fix things. No such luck. While there’s plenty of pointing and shooting, there’s also shoddy hit detection (”Hey! I anal probed you—twice! Why won’t you die?”), and a camera that sticks whenever I try to adjust it and spins wildly whenever I try to keep it still. This problem even corrupts my favorite part of the game; since moving the Wiimote up and down raises and lowers the saucer when it’s in the air, the spacecraft is subject to the same sticks and catches as the camera when Crypto’s on foot. I could control the saucer if I concentrated and moved very slowly in big arcs. Not very conducive to blowing things up just for the joy of destroying them. 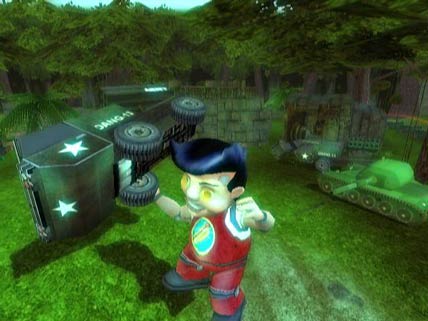 But I think that the greatest weakness of Big Willy Unleashed is its setting. The first Destroy All Humans! was set in the 1950s: a time when America was still processing what happened in Nazi Germany and the threat of the Cold War, partly by making movies about hostile aliens. In the first game, the humans’ barely-concealed anxiety about a Communist takeover fits perfectly with the alien invasion going on right under their noses. By the 1970s, alien invasions had fallen out of favor in scary movies, and the enemy was much more likely to come from our own ranks (e.g. perfectly human serial killers or little girls possessed by evil spirits). Although Locomotive Games faithfully follows Pandemic’s lead with jokes that refer constantly to the time the game is set in, the references don’t work nearly as well. The “Red Scare” of the 50s is replaced by digs at disco, marijuana, and Timothy Leary. What social commentary and cleverness the original game had is gone.

Destroy All Humans!: Big Willy Unleashed is just like its predecessors, only more so. It’s inherited all the original game’s problems—a major feat, since it’s developed by a whole new company—and lost some of its charm in the process. Congratulations, THQ, you’ve published the same game three times. Too bad nobody tried to fix what was wrong with it, or understood what about the formula worked and why. Rating: 4.5 out of 10