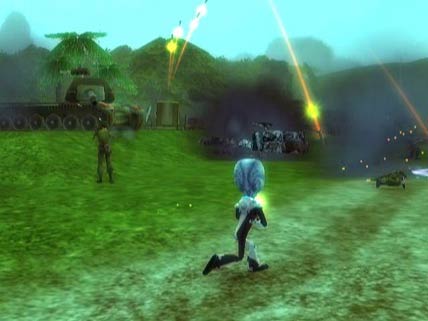 Parents: Big Willy Unleashed is the kind of game that makes me wish that the ESRB had a rating between Teen and Mature. While the violence isn't realistic or imitable at all (you play an alien trying to take over the Earth), the game's object is basically to kill as many innocent people as possible. And although the violence isn't copyable, the main character's lecherous, misanthropic personality may be. There are tons of double entendres and drug jokes as well. Definitely keep the younger kids away.

Fans of the Destroy All Humans! series know what to expect. So do ambivalent players who may have been intrigued by some things about the series, but found problems with it as well. If you've hoped those problems have been fixed, they haven't.

Deaf and Hard of Hearing gamers should have no problems. The game features a subtitle option, which captions all speech in Big Willy Unleashed—from Pox and Crypto's mission-chatter to the exclamations of the people in the streets. There are even visual cues to compliment the sirens and auditory warnings when Crypto draws more attention to himself. It's fully accessible.