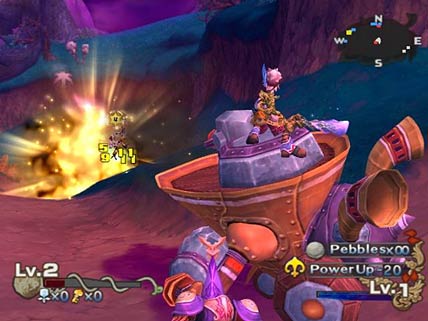 Parents have little to worry about with Dawn of Mana. There's no swearing, no nudity, and the violence, while maybe a little intense, isn't gory at all. Players whack monsters with swords, shoot them with pebbles and elemental magic, and throw them into objects or each other. Young teenagers should be fine.

Fans of the Secret of Mana/Seiken Densetsu series should know that Dawn of Mana isn't an action RPG like its forebears. While earlier installments have been compared to open-ended adventure games with RPG elements like The Legend of Zelda, this game is closer in spirit to combo-collecting action games like Devil May Cry and God of War.

Deaf and Hard of Hearing gamers should have no problems. All relevant speech is subtitled, and all other important sounds have corresponding visual cues. For instance, some of the monsters make noise when approached, but they aren't well-hidden and most have animations when they spawn.