Polish on a Dated Formula 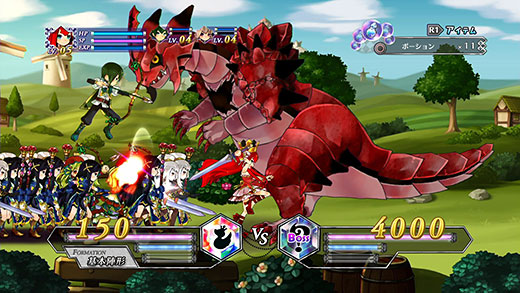 High The visuals are gorgeous.

Low The gameplay is boring.

WTF The king is a goose, I guess?

I had such high hopes when I first started playing Battle Princess of Arcadias. The 2D art is beautiful, and five minutes in, the battle princess's male guard pulls a Ned Stark and dies to further her character development. Surely, I thought, a great-looking game that turned the whole "women in refrigerators" trope on its head would be full of all kinds of surprises. But it wasn't long before I was thinking of Brad Gallaway's review of Muramasa: The Demon Blade: a game whose beautiful art can't make up for its emptiness. In fact, I was reminded of it so strongly that it surprised me to learn Vanillaware wasn't involved with Battle Princess at all.

Like I said, action-RPG Battle Princess of Arcadias is gorgeous. Players will traverse lands that are colorful: a jungle, a desert, tundra, a volcanic scene, a castle. Unfortunately, those are the only scenes in the game. Even the adorable birds and plants populating them got old quickly, being palette-swapped for the different environments. Yes, they have different powers–shooting fire in the volcano area, for instance—but such recycling seems a bad use of good art design.

Maybe the repetitive art is disappointing, but it isn't really a huge problem. What's worse is that this repetitiveness is infused throughout the gameplay.

Battle Princess has three kinds of stages: ones where a single character faces off against hordes of monsters, ones where the princess leads her army of 150 people against a huge boss monster, and "skirmishes" where she leads her armies against other armies.

The skirmishes were my favorite, because there's at least some roshambo-style strategy involved (axe-users are strong against swordsmen, for instance) and, okay–I also liked them because by the time I'd figured out how to level up my armies, I had 15,000 gold to pour into them. I wiped the floor with enemy brigades for the rest of the game.

In the other two modes? Players just walk left and kill things.

There are no puzzles, no secret rooms, no open exploration of any kind, and the game wants players to do this with ten unique characters, leveling them each to 99. Battle Princess of Arcadias is so monotonous that I kept playing it out of inertia rather than because of enjoyment, but I kept hoping for more of the magic from its first five minutes. Sadly, that magic never appeared. Rating: 4 out of 10


Disclaimer: This game was obtained via publisher and played on the PlayStation 3. Approximately 30 hours were devoted to the single-player mode, and the game was completed. There are no multiplayer modes.

Parents: According to the ESRB, this game contains: fantasy violence, suggestive themes and mild language. The violence is bloodless; even the women's outfits are appropriate for battle. The "suggestive themes" may mean the female intelligence officer who loves women in general and the battle princess in particular, or maybe the princess's talk of cooking her goose-brother and eating him. At any rate, it should be appropriate for teens.

Deaf and Hard of Hearing: The voice acting is Japanese, and all the dialogue and mission information is presented in text. I played a lot of the game with the sound off and had no problems.