The Power of Love is a Punch to the Face 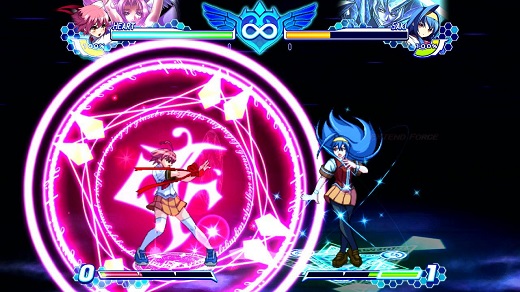 WTF Is that Dr. Robotnik?

I'm only a casual player of fighting games—Street Fighter and Darkstalkers are the series I'm most familiar with, and it took me years to do a Hadoken properly. Nevertheless, Arcana Heart 3: LOVE MAX!!!!!'s Capcom-esque 2D art style and its entire roster of female fighters piqued my interest, and I felt like I was probably reviewing it against my better judgement.

Aside from one really dodgy game design choice… I liked it a lot.

An updated re-release of 2009's Arcana Heart 3, this game with a cast full of angels (like, actual celestial beings…I think) offers a plethora of options for players of all skill levels. Not only are there nine levels of difficulty, but players can choose a "simple" control scheme that lets one pull off special moves without all the complicated button finagling.

I also liked the homing feature. Upon knocking someone into the air, the player can close the space by pressing the X button so that she can keep her combo string going as long as possible. Also, homing can cancel a wide variety of attacks—from regular punches and kicks to special arcana moves.

The arcana I just mentioned are something else that sets Arcana Heart apart from other fighting games; they're creatures based on Tarot cards that serve as partners. Each one has its own stats for offense and defense, and its own special skills. The Tyr arcana is ice-based and can freeze opponents, for instance, while the Nature arcana has healing powers. Instead of each fighter having her own movesets without any way to tweak them, any girl in Arcana Heart can use any arcana she likes. With 23 fighters and 23 arcana, there are hundreds of power combinations.

The hand-drawn 2D art makes me nostalgic for the Capcom fighters of yore and some of the designs are clever. One of the girls, Lilica, is a half-demon that looks like a blonde Etna from Disgaea: Hour of Darkness. Another draws herself a fighting partner with chalk, and still another wears a mech suit that looks suspiciously like Dr. Robotnik. Unfortunately, the game screen is only in 4:3 aspect ratio; the extra space on a 16:9 television is taken up by close-ups of the fighters bouncing on the sides of the screen.

The story is just a device to pin the game on—something about planar rifts opening up all over Japan and collecting celestial stones. There's also an After Story mode for each character that's new to LOVE MAX!!!! and is about…the girls looking for a secret hot spring. (After Story is much shorter than the main story mode, with visual novel-elements punctuated by one or two fights.)

Other modes include Time Attack (beat everyone as quickly as possible), Survival Score Attack (get the highest score possible) and Trial, where players must meet specific conditions to win medals—X number of combos in a match, X number of cancels, etc. Winning matches unlocks extra stories, and there are lots of ways to win them. However, those who want to compete against humans had better have friends who play LOVE MAX!!!!! because the online matching is completely and utterly dead. Part of the problem is that while the game is available for both the PlayStation 3 and the PlayStation Vita, PS3 and Vita owners can't be matched with each other, so the pool of players for an already-niche title is limited even further.

Worse, though, is how frustrating the final boss fight in Story Mode is. Players must destroy weak points on a giant robot before time runs out. If they're defeated or have less health than the boss when the clock winds down, it counts as a Game Over and they can use a continue to fight the final boss again. However, if the player is unlucky enough to have more remaining health than the boss when time runs out, they're dumped into a Bad End that starts the entire game over again. I cannot tell you how many times I got thrown back to the beginning like this. Even adjusting the timer in the options doesn't help—the final boss's clock maxes out at 60 seconds, no matter what.

Aside from the story mode's cheap final boss and my inability to find anyone online to play with, I had a great time with Arcana Heart 3: LOVE MAX!!!!! Yes, some of the more unusual mechanics took a while to get used to, but the very customizable difficulty helped out a lot. Using a character's ultimate move is one of the best feelings in the world, and LOVE MAX!!!!! lets me do it without jumping through esoteric hoops. All in all, it's an accessible, enjoyable fighter. Rating: 7 out of 10.


Disclosures: This game was obtained via publisher and reviewed on the PlayStation 3. Approximately 10 hours were spent in single-player modes, and Story Mode was completed. No time was spent in multiplayer modes.

Parents: According to the ESRB, this game contains: alcohol reference, language, partial nudity, sexual themes and violence. It's a martial arts game, and the adolescent female fighters wear semi-revealing clothing. Nothing real risqué, but they are supposed to be eye-candy.

Deaf and Hard of Hearing: You should have no problems. The voice-overs are in Japanese so everything is subtitled, and there are no significant auditory cues. I spent several hours with the sound off and had no trouble. It's totally accessible.

good analisis,shame for the online,in the boss fight you need to fight quick,if you lose the fight before the time is over you can retry without problem.