Don't go in the attic 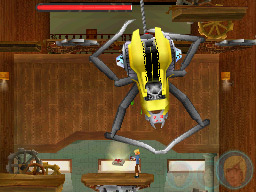 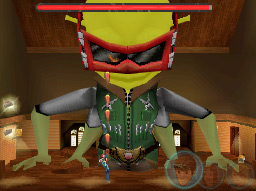 LOW Fighting a missile-shooting freezer, only to have my game lock up more-than-several times.

Based on the film of the same name, Playlogic's Aliens in the Attic for the Nintendo DS follows Pearson kids Tom, Hannah and their cousin Jake as they investigate the extra-terrestrial invasion going on under their noses…and above their ceiling. They have a variety of weapons at their disposal: everything from slingshots to ray guns to Jake's potato-shooting Spud Gun. Along the way, they can collect bolts by destroying the robots built by the aliens. Players use these bolts to upgrade their weapons.

Players can switch seamlessly between characters at any time via the L and R buttons, and each kid has special skills that come in handy while adventuring. Jake can push giant blocks (useful for jumping on or activating switches to hold doors open), Hannah can do a super-high double jump yet is small enough to crawl through tiny spaces, and engineering genius Tom can use the various alien gadgets lying around. He can also hack electronic doors. Players open them by spinning a Roulette wheel on the Touch Screen, then dropping colored balls in the correct places. It may not be a brilliant concept, but it's more fun than trying to hack the vending machines in BioShock.

During boss fights—where the kids face off against giant 3D aliens or their war machines—the game's puzzle elements morph into "Use that alien gadget you just found!" Tom uses his Flash Gun to stun an alien in sunglasses who doesn't like light; he controls gravity to lift pieces of wall and drop them on another alien's hand. The most challenging boss is a missile-shooting freezer: Tom has to deploy a shield to bounce the missiles back, duck under blasts of ice, and run in the other direction when the freezer pulls him toward itself. Taking the freezer down involves juggling three different stratagems at once, which I appreciated the complexity of in between spewing four-letter-words.

Or rather, I think that such stratagem coordination is how one destroys the freezer. Every time I came close to defeating it, my game would freeze up (no pun intended) and I'd have to reset. After half a dozen interruptions like this, I gave up.

Technical problems aside, I liked Aliens in the Attic more than I thought I would. It's competent (and the 3D bosses look nice), but there's nothing going on here that I haven't seen a million times before. While the game is a decent way to kill a few hours, "It's better than I thought it would be" is faint praise in this case. I can't recommend it, especially considering the technical snafus I had. Keep that attic boarded up, folks. Rating: 1.0 out of 10 thanks to technical problems. Otherwise, 4.0 out of 10.

Disclosures: This game was obtained via publisher and reviewed on the DS. Approximately four hours were devoted to single player modes, and the game was not completed. There are no multiplayer modes.

Parents: According to ESRB, this game contains fantasy violence. Aliens in the Attic is a game about shooting aliens and robots with weapons of varying ridiculousness. There's no blood, no bad language, and no sexual content. I'm not sure why my copy kept freezing, though.

Deaf and Hard of Hearing: All dialogue and mission information is in text, and there are no significant auditory cues. It may not be a great game, but it's accessible.