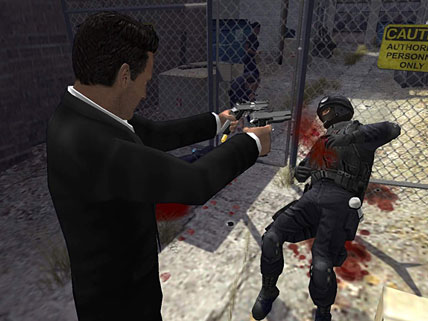 Parents: keep kids away from this game. It features hostage-taking, cop-killing, speeding, swearing, stealing, and other assorted acts of psychopathy. Reservoir Dogs deserves its M rating, and isn’t that fun to play, anyway.

Casual gamers should keep away, as well. The game’s missions are incredibly dull: they mostly involve taking one hostage after another while neutralizing threats from law enforcement (“Hands on the wall!”) until you get to the end of the stage.

Fans of the film will be very disappointed, especially if they admire the movie’s innovation. The game adds scenes that the film famously left out, and they only got one of the movie’s original actors to reprise his role (Michael Madsen, as Mr. Blonde). Pick up Lionsgate’s new 15th anniversary DVD, instead.

Deaf and Hard of Hearing gamers can turn on full subtitles in the options menu; however, there are no textual indicators of who is speaking. Besides, hearing cops and sirens before you see them (and without needing to watch the bottom of the screen) is extremely helpful.