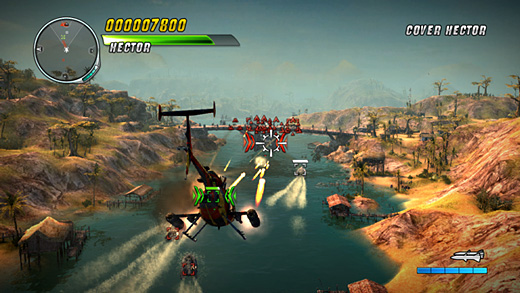 HIGH Playing a mission that actually let me destroy everything.

LOW Successfully dodging missiles only to get pelted by more a split second later.

WTF Why does it go back to the menu screen after completing a mission?

There seem to be a lot of developers that purposefully create games in the "so bad, it's good" category, like the nostalgic nod to '80s action films in Far Cry 3: Blood Dragon or the over-the-top, irreverent wonderland that is Saints Row IV.

, a helicopter assault arcade shooter that is "so bad, it's actually bad."

Those that are old enough to have played Desert Strike and Jungle Strike on the Super Nintendo and Sega Genesis will recognize Wolves's mechanics instantly. Flying a chopper with a co-pilot that's way too anxious to kill people, the majority of the game is spent in third-person flying over terrorist bases while blowing up anything that moves, providing support for ground units, and occasionally transporting commandos.

I was able to pick up maneuvering and aiming quickly, and was surprised to find it to be a (mostly) smooth experience. In many of the helicopter games I've played, handling the aircraft was often frustrating at first, but here I had no issues, even when it came to aiming accurately.

However, evading incoming missiles from anti-aircraft vehicles or enemy choppers is a different story. This is the game at its most hectic, and the best way to avoid fire is to either use the boost ability and outrun it, or use flares to send it off course. These tactics work fine when the radar decides to do its job, but this function is glitchy and sometimes the notifications appear either too late or not at all.

Other than trying to avoid dozens of missiles at a time, Wolves is pretty much a walk in the park. The machine guns have infinite ammo and don't overheat, and all the special weapons regenerate soon after they're spent. This does recreate the arcade experience, but some additional things to manage like refueling or other types of hazards to avoid would have helped boost the difficulty.

Things are shaken up a bit when the action shifts to driving a tank, sniping guards, steering guided missiles into enemy safe houses or using a mounted gun during on-rails segments. While a decent change of pace, these moments are scattered and often don't make any sense. I was perplexed on more than one occasion after I was magically whisked away from my chopper to a ground scenario without any indication that I had landed.

Even more confusing is the story, which jumps between two operations: one involving a drug cartel in 1986 South America, and the other battling terrorists in 1991's Middle East. From what I could glean, the two mission zones are connected somehow, but it was difficult to gather all the details when most of the dialogue is shouted by different pilots via absurd, jarring catchphrases which interrupt gameplay for a few seconds at a time with such wisdom as "The thing with intel is that it's always rock-solid, until it isn't rock-solid!"

The presentation is just as hackneyed as the writing. The choppers look fine in a PlayStation 2-era sort of way, but everything else appears to be made out of cardboard. It gives the game the feeling of flying through scale models of villages, outposts and encampments set in hobbyist dioramas more appropriate for model trains.

With all the ironically big, loud and dumb games available, Thunder Wolves

comes off as a tryhard. It touts mass destruction, but only a few stages allow for real obliteration, and the characters' insipid banter is ham-fisted and devoid of wit. Sure, there's arcade chaos, but the game is only two hours long, the co-op is local only and the glitches are the only true threat. There's both good action and good action parodies out there, but this is neither. Rating: 3.0 out of 10.

Disclosures: This game was obtained via publisher and reviewed on the PS3. Approximately two hours of play were devoted to the single-player mode, and the game was completed. No time was spent playing local co-op. There is no online multiplayer.

Parents: According to the ESRB, this game contains violence, blood and strong language. Nothing about this game is even remotely realistic, and there is hardly any blood at all. In fact, it's really only noticeable during the sniping portions. That being said, there's a ton of violence and plenty of cursing, so scuttling the kids off to bed before sitting down to play might be in order.

Deaf & Hard of Hearing: All of the dialogue is subtitled and the mission objectives are clearly marked. The problem is the notifications that pop up when missiles are headed towards the helicopter. Like I mentioned in the review, they're glitchy and don't always appear, which requires listening to audio cues that are even more inaccurate. I would suggest avoiding this one.