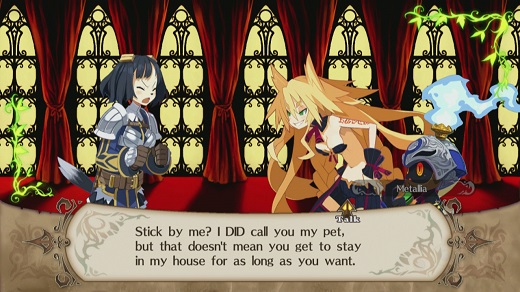 WTF "Your ti**ies look like a couple of big ol' turkeys!"

Nipon Ichi Software (NIS) is a company I look to for quirky, niche titles that can satisfy my thirst for absurdity. Their games aren't the easiest to get into, but more often than not I find something of value tucked away in some of them. Disgaea is a prime example of their best output, and I was hoping to find something of a similar quality in The Witch and the Hundred Knight. Instead, I discovered one of the least enjoyable titles they've put out in some time.

The wicked Metallia is on a mission to prove herself as the most evil witch in the land by turning everything into a swamp. In order to lower everyone's property value, she enlists the aid of a cute puppet minion called The Hundred Knight. He can't talk, but players can select squeaky, Pokémon-esque responses when questioned by his malicious master. Knight's main goal in this hack-and-slash JRPG is to destroy Pillars and the Guardians protecting them so Metallia can achieve world swampination.

To call Metallia an awful person is an understatement. She's crude, hateful, and Knight is basically her slave. Virtually every time Knight runs into other NPCs, Metallia orders him to play some nasty trick on them. At one point she pretends to be a "Good Witch" so she can lead a cursed knight into a trap and eventually kidnaps her, leaving her drugged, tied-up and naked. Of course, she's an evil person doing evil things, but I was unable to find any entertainment here.

Normally I don't mind dark comedy, but Hundred Knight is severely lacking in laughs—more than anything, it feels like it was written by a teenage sociopath. There's no charm to be found, just nonsensical vulgarity as the Knight traipses from village to village, wreaking havoc for Metallia. Perhaps some sort of moral themes or depth appear later in the game, but I wouldn't know since the boring and oft-confusing gameplay caused me to throw in the towel early.

On the surface, Hundred Knight is simple: choose an area, run to the exclamation point pictured on the mini-map, gain experience points and loot by beating up enemies, then fight the Big Bad and destroy the Pillar at the end of the stage. Other than the wonky camera causing some odd angles at times, this is a swift and easy process similar to the Diablo games. Unfortunately, it's nowhere near as smooth and cohesive as Blizzard's work.

The biggest problem (other than the button-mashing combat) is that there's far too much backtracking involved, and the stages lack variety in their design. These areas are boring the first time through, and coming back later doesn't make them any more interesting. The developers tried to mix things up by tossing in a boatload of mechanics, but most are either arbitrary or poorly-described in the onslaught of tutorials that appear in nearly every stage.

One of the first tutorials describes how weapons work. The Knight can equip swords, spears, hammers and staves (up to five of any combination), with each one providing a way to smash baddies susceptible to different kinds of weapon-specific damage. What's not mentioned here is the importance of item rarity and chaining combos. It was after two hours when I was finally provided a hint (on a loading screen!) that gave me some much-needed info.

Each weapon has a "Die Number" pictured on it (1-5) and if they're placed in numerical order, chain bonuses are rewarded. How easily-obtainable an item is (common, rare, epic, etc.) factors in heavily, as well—greater rarity means greater damage. I figured that part out on my own, but it would have been nice to know how chaining worked from the start since I was able to get things done a lot faster once I put the knowledge to use.

The Knight's "stomach" is another confusing mechanic, and it ultimately seems pointless. His gut is used as an additional pouch to carry items found on the field. Some loot goes into the regular inventory, but a lot goes into the limited space in his tummy for reasons unknown. Worse, none of the items that find their way there (I'm not sure how the game decides) can be accessed until after completing a level, which means any spiffy new weapons or healing items discovered can't be used right away. This mucks things up in a way that's unnecessary—one inventory on the Knight and a storage container at Metallia's house (Hundred Knight's base-camp) would be more sensible.

What's even more baffling is Karma. It's possible to ‘dominate' villages for Metallia by raiding houses and shops. Doing this raises Karma points, which means Knight can be attacked by NPCs and be charged more for items at shops if his Karma gets too high. This might have been a decent concept except that villagers are easily defeated and the only good weapons and armor are found on the field. As such, I was breaking-and-entering with impunity since the Karma consequences were so trivial.

The only successful gameplay element I noticed is the Knight's ever-dwindling supply of "Giga Calories" (Gcals) that act like a stage timer. Gcals burn while adventuring and can be replenished by "consuming" weakened monsters or eating specific food. However, when the Knight runs out of them, he starts losing health and eventually has to start the level over. I like the urgency this gives, plus it provides a valid excuse to revisit areas to find secrets and side-quests since it's impossible to have enough Gcals to clear everything out on the first attempt. Regardless, this wasn't enough to hold my interest.

As I mentioned earlier, I didn't finish Hundred Knight. Metallia's antics coupled with the dull gameplay was just too much to take. Even if it does get better later on, the hours I sunk into the game's unsatisfying mechanics and nasty storyline left me cold. NIS has many good titles in their library, but this isn't one of them. Rating: 4 out of 10


Disclosures: This game was obtained via publisher and reviewed on the PS3. Approximately 10 hours of play were devoted to the single-player mode, and the game was not completed. There are no multiplayer modes.

Parents: According to the ESRB, this game contains: blood, crude humor, fantasy violence, language, partial nudity and sexual themes. Children and those with taste should avoid this game at all costs.

Deaf & Hard of Hearing: I didn't notice any audio cues during my time spent playing. All of the dialogue is subtitled and I was able to play just fine with the audio off.