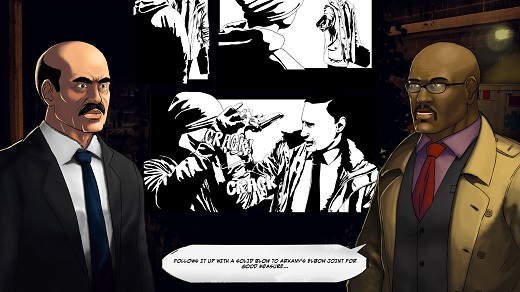 LOW We get it, he hates his job…

The biggest issue with reviewing the first installment of a multi-part game is that, well, it's the first installment. In my experience (which is plentiful at this point) ‘Chapter Ones' generally provide a taste of what's to come, and little else. The Detail from Rival Games doesn't buck expectations in this regard, and while that's not necessarily a bad thing, it does make it rather difficult to tell if their claim of player choice drastically altering this adventure game's story is accurate or not.

The overall presentation is that of a graphic novel and television police drama. Players control three protagonists as the story progresses, including a bitter homicide detective and a reformed criminal that has to "get back in the game" to play informant for said police. The cop-talk and street-tough dialogue is laid on pretty thick, and most of the genre's tropes are accounted for (a deal gone wrong, "I'm too old for this shit" sentiments, a gang meeting in a strip club, etc.) but the motion-comic design, seamless shifts between characters and relevant themes made up for the iffy script.

There are no puzzles or combat, just conversation trees and some minor QTEs, but this is a game that doesn't need any additional mechanics. Indeed, pixel-hunting and shoot-outs would clutter the story, which is essentially painting an ugly picture of America's criminal justice system a la The Wire—a fact that becomes more obvious as the narrative examines a major crime from different perspectives.

The Detail opens with a monologue from the detective about choices and consequences. Naturally, he's referring to his job (a career he doesn't view as really providing justice anymore) but this is also meta-commentary on the decisions the player is about to make. Sure enough, control soon shifts to a cop and her partner outside the apartment of a known criminal. They hear someone scream inside, and their options are to either kick down the door or pick the lock. Time is a factor here, so how the door gets opened and how many rooms get searched determine what happens during the ensuing encounter, after which the point of view switches back to the detective as he interrogates the criminal.

Using a show like The Wire as a template for an adventure game is a concept that I've been wanting someone to tackle for a while. Not only is the adventure genre's minimalist gameplay the perfect venue for a neo-noir crime tale that examines justice, police procedure and government infrastructure, but allowing players to make decisions throughout the course of the game provides added depth and immersion while exploring these issues. Granted, the characters and script aren't anywhere close to being as good as The Wire, but at least the core ideas are present.

I played through the game twice and found that nearly every choice has an effect on the story, even though the changes are minor. However, some of them could have major ramifications in future episodes, like whether or not the detective tells the press anything about the case. Again, because this only the first hour-and-a-half of the story, I can't be certain how all of this will play out.

There's nothing truly ground-breaking going on in The Detail (Telltale and BioWare have done better in the "players-choose-their-responses" department), but it does have potential. I'm particularly interested in finding out how my choices alter future episodes and, ultimately, the ending. If the developers are able to pull that off in a unique and engaging manner, then The Detail might prove to be something special. That said, this still feels like a work in progress and I wouldn't blame anyone who decides to wait until the final chapter is released before diving in. Rating: 6.5 out of 10.


Disclosures: This game was obtained via publisher and reviewed on the PC. Approximately 4 hours of play were devoted to the single-player mode, and the game was completed twice. There are no multiplayer modes.

Parents: The Detail isn't rated by the ESRBa at the time of this writing. Due to the strong language, adult themes and a few scenes of violence, I'd imagine it would receive an M rating. Parents should have their young ones avoid this game, but it's perfectly fine for teenagers.

Deaf & Hard of Hearing: The only sound I heard in the game was the musical score. There's no voice acting or effects. Playing with the sound off is not a problem at all.

I think I will wait until future episodes come out before I make my decision on this. Many mystery/detective games are sorely lacking in choices with consequences that truly impact gameplay, but if the writing doesn’t rise above cliche then it won’t enhance the experience.