Bang and a Whimper 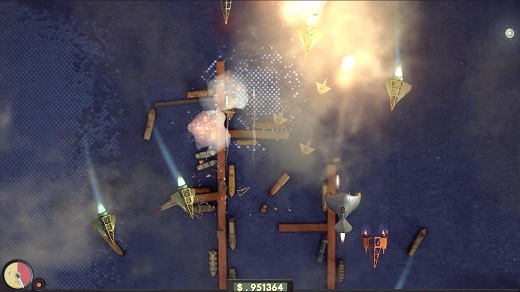 LOW Careening into enemies when I'm not even touching the controller.

Shoot 'em ups are games that demand precision. If there's even a minimal amount of lag or the slightest hiccup in the controls, they can become difficult for the wrong reasons, or worse, nearly unplayable. Swedish developers Might and Delight (Pid, Shelter) should have taken this into account with their visually appealing, yet bland vertical-scrolling shooter The Blue Flamingo.

The concept is simple: fly the Blue Flamingo through various stages while blowing up other planes and rockets. Unlike arcade classics such as 1941 or Galaga, this isn't a "one-hit-kill" shoot 'em up. Instead, players are given a health meter, one life and no continues. Players can beef up the Flamingo's guns and bombs at the end of each stage with the coins they've collected from enemies, but they can't pay for any repairs.

This survival/endurance approach to the gameplay is something I don't mind; I actually welcome the challenge. The issue here is the lack of depth and absolutely horrible controls.

Other than upgrading weapons, nothing else is customizable. In fact, the upgrades don't really help at all, and only seem to barely boost the fire rate. No spread-damage, no extra rockets, no nothing. Just slightly faster pew-pew-pew. I'm all for minimalist design, but when the mechanics don't do anything special or provide value, that's a problem.

I might be able to forgive a few flaws if there's excitement to be found, but this is not the case. The controls are so touchy that I felt like my plane was on a skating rink, sliding around even when I barely touched the analog stick. It makes dodging bullets and foes a complete hassle when the screen has a decent amount of enemies on it, which is not often. Most of the time only three or four show up, shoot a couple of bullets and leave. The action does eventually pick up, but there are no bosses to fight and the sloppy handling and periodic dips in framerate cause too much frustration to make this even a mildly entertaining experience.

It's unfortunate The Blue Flamingo doesn't have much to offer, because the developers obviously took a lot of care and effort to create the graphics. Everything is handmade—Might and Delight created models for the backgrounds, planes and even used firecrackers for the explosions. It's all quite stunning, even though I did initially feel like I was flying over screenshots of Google Earth.

Kudos to the devs for their art design, but it isn't enough for me to recommend buying The Blue Flamingo even if it were a Steam sale. It's a technical disaster that fails to deliver any of the arcade bliss typically found in shoot 'em ups thanks to weak action, wimpy explosions and whacked controls. Leave this one in the digital bargain bin. Rating: 1 out of 10.


Disclosures: This game was obtained via publisher and reviewed on the PC. Approximately 5 hours of play were devoted to the single-player mode, and the game was not completed. There are no multiplayer modes.

Parents: The game isn't rated by the ESRB but I'd imagine it would receive an E for Everyone. It's fine for all ages.

Deaf & Hard of Hearing: I had no problems playing with the sound off. There are no audio cues that are necessary to hear and there's no dialogue.