Don't max out the data plan 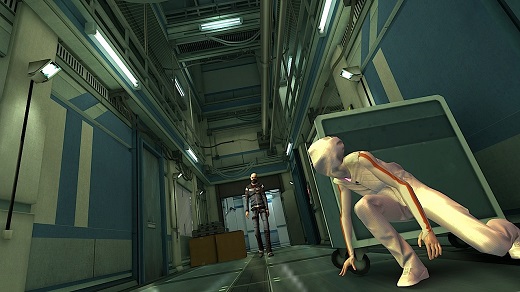 Camouflaj is a studio comprised of programmers with an impressive resume. Having worked previously on Metal Gear Solid 4, Halo 4 and F.E.A.R., it's not a surprise that their first foray into indie gaming would be something as ambitious as bringing the full AAA experience to mobile devices with Republique.

Recently beefed up with the latest Unity engine and released on the PC as Republique Remastered, the gameplay translates well to mouse and keyboard. Unfortunately, everything else is a mess, especially with regard to the most recent chapter in this episodic point-and-click stealth title.

In our post-9/11, surveillance-state paranoid society, we've seen a rise in art that reflects our fear of privacy invasion and Big Brother—Republique is a perfect example. Set in a compound controlled by a fascist Overseer running experiments on teenagers, the plot revolves around a girl named Hope who's attempting to escape. Players must use her contraband smartphone to take control of security cameras in order to guide Hope to freedom.

The mechanics are simple: hack cameras to view adjacent rooms, check for guards and watch their patrols, and then click on the spot Hope should sneak to for cover. Ironically, doing so sometimes adds unintentional humor to the game—it's possible to hide in places that really shouldn't work but hilariously do, like behind potted plants and statues that barely conceal Hope. To go along with their poor vision, the guards also suffer from selective hearing. When Hope runs they can instantly track her, but they're completely oblivious to the racket she makes when she's next to them opening a locker to hide in.

As she plays cat and mouse with the guards and other antagonists, she's able to unlock new features for her smartphone that grant more ways to cause distractions. There are inconsequential upgrades as well, such as listening to voice messages and reading emails. Some of these may provide a hint at what to expect in later rooms, but they're really there for flavor and don't have a lot of value.

What is valuable is clicking on highlighted newspapers, paintings, statues and other objects, because this is primarily how the story is told. There are also cut-scenes, but most of the narrative is provided by audio logs played while exploring each room. Normally I'm not a fan of this sort of thing, but because the story isn't "hidden" from players and is easily discoverable, the method actually works.

The first three episodes in Republique Remastered are mainly about Hope's escape. Initially, I found it difficult to get into the story. The characters were bland and I wasn't clear about what was going on. However, the plot picks up toward the end of the first episode, and the next two are quite entertaining. There are still questions about what the Overseer is really up to besides running tests on kids and banning books, but Hope and the supporting cast become more interesting, and it appears that things will start making sense in the fourth installment.

Sadly, the opposite is true.

Episode four, the latest release in Republique, contains an unexpected, jarring shift in tone. For one, the art direction and atmosphere are completely different and give off a strong horror vibe. Second, Hope has been stripped of the UI she had been using for the previous three installments and new mechanics are introduced. Last (and most striking) Hope is acting strangely and talking in an odd manner with no explanation thanks to the gap in narrative between episodes three and four. I'm sure the writers did this for added mystery and intrigue, but I was more frustrated and confused than curious. The cliché cliffhanger ending didn't help, either.

It's a shame Republique has taken a turn for the worse, especially since the updated PC version is a solid port of the original. While the opening acts are engaging, they're undermined by the newest chapter's bumbling writing and nonsensical changes. With luck, the fifth and final episode will knock it out of the park and justify episode four's existence. Rating: 6 out of 10


Disclosures: This game was obtained via publisher and reviewed on the PC. Approximately 10 hours of play were devoted to the single-player mode, and the game was completed. There are no multiplayer modes.

Parents: Republique Remastered hasn't been rated by the ESRB. If it were, it would probably receive a T (13+) rating due to themes, violence and mild language.

Deaf & Hard of Hearing: Playing with the sound off is do-able but makes the game a little more difficult, but not by much. The only drawback is not being able to hear footsteps or the guards talking to one another when they're on the hunt for Hope. The rest of the dialogue is subtitled, however.