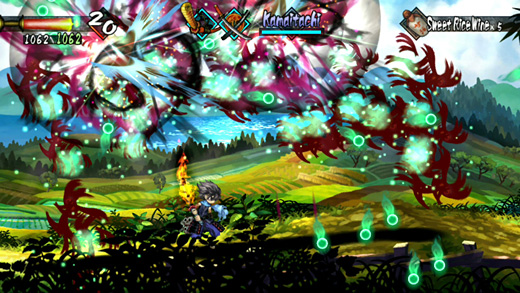 HIGH Saving courtesans from the clutches of evil.

LOW Not skipping the long and mostly pointless tutorial.

WTF Did I just do a 37-hit combo with two button presses?

, a high-resolution makeover of the Wii's Muramasa: The Demon Blade, marks my first foray into the world of Vanillaware. Ever since the release of GrimGrimoire for the PlayStation 2, I've been curious about the Japanese developer, mainly because of their focus on role-playing game (RPG) elements and the appeal of their beautiful artwork.

The premise of Rebirth I found appealing, as well. I like experiencing a game from the perspective of multiple characters, and being able to view a mystical version of the Genroku era in Japan through the eyes of a demon-possessed princess and a fugitive ninja suffering from memory loss seemed too good to pass up.

After selecting the princess and beginning my adventure to search for demonic swords, I quickly realized that the old cliché "looks can be deceiving" is apropos. Rebirth's visuals are certainly fetching with everything vibrant and lush on the Vita's High-Definition screen, but I found all this eye-candy to be a farce, and any initial pull it had was forgotten after experiencing the rote gameplay.

As a 2D sidescroller rooted in Japanese lore that offers a mix of hack and slash combat, light platforming, a dash of item creation and weapon forging, Rebirth seems to have a solid design. However, the results are a bland narrative told mostly by vague conversations with motionless non-player characters (NPCs), and gameplay rife with repetitiveness that offers hardly any incentive to plod ahead.

While slashing up ninjas and samurai certainly looks cool, the combat runs on auto-pilot most of the time. By pressing the square button and manipulating the left analog stick, various combos can be pulled off, but there's really no trick to it. I was button-mashing more than anything else, including a boss battle in which my strategy to just stand next to him and press attack netted a flawless victory.

There’s more challenge as the story advances with efficient jumps, blocks and rolls becoming a factor, but this is really only necessary when up against some of the Big Bads. The normal enemies which appear randomly in groups are mostly pushovers and relatively boring to fight. I would call them a nuisance, but traveling the long, samey areas to reach a new portion of the map (including backtracking) grows very stale when an encounter doesn't pop up for multiple screens in a row.

The developers attempted to give some depth by making a ton of swords (over 100) available, including crafting new ones and also allowing the player to use ingredients to cook food. While a nice thought, these bits feel underdeveloped given how most of the blades work the same and how food can be purchased easily in numerous places scattered throughout the world.

The only aspects of the gameplay that I felt worked were the RPG elements. The effects of stat-boosting accessories and level gains are noticeable, and swords also degrade with repeated usage. Granted, every sword restores itself gradually while unequipped, but being able to swap out a damaged one for something better is a quick process that can even be incorporated into a combo, coming in handy against some of the peskier villains that can break swords like twigs.

Despite being able to find at least a couple good bits in the core of the game, these positives are rather trivial when compared to the flaws. The majority of the design is dull simplicity, the narrative is an esoteric mess, and the pretty aesthetics feel wasted being surrounded by so much mediocrity. Indeed, the art's role seems merely to seduce would-be players with false promises. I won't get fooled again, Vanillaware. Rating: 4.0 out of 10.

Disclosures: This game was obtained via rental and reviewed on the Vita. Approximately six hours of play were devoted to the single-player mode, and the game was not completed. There are no multiplayer modes.

Parents: According to the ESRB, this game contains alcohol reference, fantasy violence, language, sexual themes. This is a definitely a "T" game. There is a lot of violence, but it's bloodless and cartoony, and the story contains references to sexual activities, including a segment about saving the souls of dead courtesans (read: prostitutes).

Deaf & Hard of Hearing: I played the game with the sound off quite a bit and didn't have any problems. Anytime enemies are about to appear a large exclamation point pops up on the center of the screen, and I didn't notice any audio cues that were necessary to hear in order to effectively play the game.