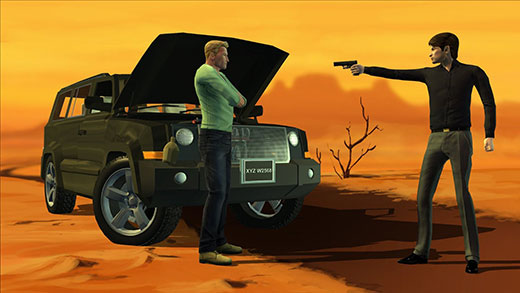 HIGH The air of mystery at the beginning of the game.

LOW Everything that came after the beginning.

It might have been the moment when Malachi pondered the odds of being sexually assaulted by a man walking down the highway, or maybe it was when he squared off against hooded assassins in a poorly-choreographed street fight that I realized Moebius: Empire Rising

isn't exactly the sort of point-and-click adventure I'd come to expect from Jane Jensen.

Moebius is a metaphysical thriller in the vein of Jensen's Gabriel Knight games. As a cynical, pretentious antique dealer, Malachi Rector is an unlikely hero hired by a secret organization to investigate a murder. From here, he and his bodyguard get caught up in a conspiracy that involves the Moebius Theory. This theory claims history runs on an infinite time loop and it's a decent premise, but the writing and gameplay aren't as entertaining as that concept.

Malachi has a knack for analyzing not only precious heirlooms, but people as well. As such, a large chunk of the game is devoted to researching whether or a not a suspect's life story matches that of a historical figure. This is done by collecting a set number of data points (different for each person) through interviews, internet searches on Malachi's smartphone and by examining objects that could provide hints into their past.

This sleuthing was probably the only aspect of Moebius that compelled me to push ahead, but it's unfortunately mired with shoddy logic and tiresome side tasks. At one point another antique dealer had me appraise an ancient chess piece. In another scene, I had to speak with a politician but first had to bribe a young woman to distract a man before I could gain access to the rally. The former puzzle was never mentioned again, and the latter was unnecessary filler.

There are plenty other distracting obstacles like these to face before the player gets to do some meaningful detective work, but even then they're blocked from solving anything until they uncover every single data point. I understand that thoroughness is important for proper investigations, but what troubled me the most was how I'd know the answer but be forced to solve more poorly-constructed puzzles before being able to get the final pieces needed to move on.

The most convoluted moment came during a dinner party. After spending time speaking with everyone and perusing everything in the house, I couldn't progress further and I couldn't figure out why. I then fumbled around from room to room, double and triple-checking all that I could. I finally moved on when I stumbled upon some flowers that Malachi needed to turn into a bouquet for no apparent reason. Having to jump through hoops like this led to plenty of frustration, especially since the solution proved anticlimactic.

My interest in the story began to wane every time I was confronted with these tedious tasks, but what hurts the narrative more are the unlikeable characters. All of them are bland archetypes devoid of depth and personality, and the only tension between any of them is the awkward bromance between Malachi and his hired muscle. However, instead of doing anything interesting with their relationship, Jensen chose to use this as an excuse to create "funny" moments where someone mistakes them for being homosexual and they respond with the requisite "Huh?" or stunned silence.

The visuals are just as dated as the humor. The character models are slumped and out of proportion, and look even worse during the low-resolution, grainy cut-scenes. The static backgrounds are nice enough, but they're jarring when compared to the characters. Malachi also moves incredibly slowly, a fact made more painful when he decides to sit down and the animation takes forever to pull out a chair.

fails to reach the same heights. The lack of meaningful puzzles and memorable characters make it pale in comparison to her Sierra adventures, and when put next to Telltale or Daedalic's offerings, it comes off as even more outdated. It's a shame that an influential developer such as Jensen is so behind the times. Rating: 3 out of 10.

Disclosures: This game was obtained via publisher and reviewed on the PC. Approximately 10 hours of play were devoted to the single-player mode, and the game was completed. There are no multiplayer modes.

Parents: I was unable to find ESRB information at the time of this writing, but it should be okay for teenagers to play. Due to the adult themes I wouldn't recommend it for children.

Deaf & Hard of Hearing: There are visual cues for everything and all of the dialogue is subtitled. I had no issues playing with the sound off.