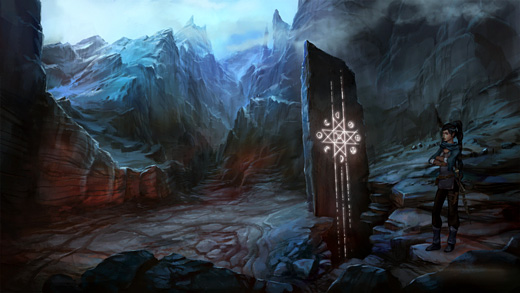 As the adventure game revival continues, one name that keeps surfacing is Daedalic, a German developer and publisher that releases at least a few point-and-clickers a year.

They're most known for The Whispered World and Deponia, and their style can be likened to the LucasArts and Sierra adventures of old. Their latest release, Memoria, continues this trend.

Based on the popular German tabletop role-playing game The Dark Eye, Memoria

has players experience two stories set 450 years apart. The main protagonist is Geron, a birdcatcher and wannabe mage who’s tasked with helping to solve a riddle by reliving the memories of the legendary princess Sadja. If successful, Geron's girlfriend Nuri (currently a raven) will be transformed back into her true form.

Even though this is a direct sequel to Daedalic's The Dark Eye: Chains of Satinav, it actually works well as a stand-alone title. However, playing Satinav first or doing some research (like I did) for added context is helpful, if only to better understand the relationship between Geron and Nuri.

The premise is rather by-the-numbers in regards to fantasy, but the fleshed-out characters, gorgeous European art, and mystery-driven plot keeps Memoria engaging. It does start slow since it's unclear how Princess Sadja's narrative fits into the big picture, but the unraveling plot and its reveals are satisfying and usually logical.

Sadja's segments are the most interesting and stunning, as her journey takes her through an ancient tomb, a massive castle, snow-covered mountains, and waterfalls. She comes from a long line of mages that hold the key to unlocking the powers of a mystical mask, and her thirst for proving herself on the battlefield is refreshing in a world dominated by male heroes. She isn't perfect, either, and the soul-possessed, magical staff she carries with her often questions her motivations. 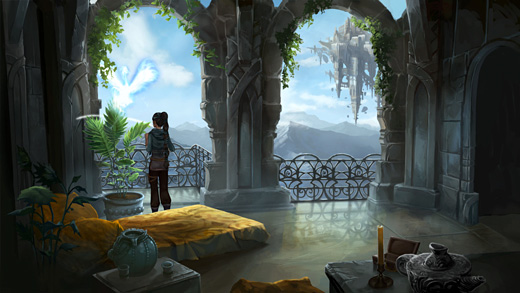 Geron, when he's not trying to figure out why Sadja vanished from history, spends most of his time in his village and the surrounding woods trying to help a local wizard.  Geron's not exactly the smartest of heroes. He's constantly getting one-upped by his wiser and more charismatic sleuthing partner whose wit and tough attitude are a great counter to his bumbling.

As entertaining as the story is, the mechanics are fairly standard. There's plenty of pixel-hunting and combining inventory items, but at least there's an option to highlight everything that's clickable and joinable. These tools came handy with the more obtuse puzzles, like when Geron has to set a trap for a thief by finding a magical power generator, asking witnesses for a description in order to draw a composite, and then locating something to use as bait.

Thankfully, the gameplay is jazzed up by the characters casting spells that can manipulate the environment. Geron can sense magic, destroy and rebuild objects. Sadja can petrify plants, control enchanted devices, and bend people to her will. These twists give Memoria a more modern feel.

These abilities are also used to great effect when solving puzzles. Early on, Sadja gets trapped in a chamber, and has to use her powers to escape. After discovering a crack in the wall, she uses her staff to control the ancient rock golems in the halls outside, moving their hands to pick up objects, or to smash the ground and walls. Not only is this intuitive, but the animations are a pleasure to watch.

Not all of the puzzles are as pleasing as this, however. Along with the aforementioned thief trap (which is too complex for its own good) Sadja has the unfortunate task of traveling through a confusing forest maze. She can use berries to mark her path and most of it can be skipped, but it's still tedious and doesn't add anything to the plot.

has problems with a few puzzles and may not be Daedalic's best offering, but it remains a well-written, accessible adventure full of surprises that serves as a great introduction to their world of whimsical fantasy. Rating: 8.0 out of 10.

Disclosures: This game was obtained via publisher and reviewed on the PC. Approximately 10 hours of play were devoted to the single-player mode, and the game was completed. There are no multiplayer modes.

Parents: The ESRB currently does not have a listing or rating for this game, though it is rated for ages 12 and up in Europe. It contains mild, fantasy violence, and a couple of innuendo jokes. It's mostly light-hearted, however, and most parents should find this perfectly fine for their adolescent children.

Deaf & Hard of Hearing: All of the dialogue is subtitled, and there are no noticeable audio cues that are required to hear. This game is perfectly playable with the sound off, so the deaf and hard of hearing community should find no issues.

This game sucks!! So much dialogue about crap I don’t care about, taking up so much time you forget what your are looking for. The puzzles are inane – completely non-logical like combining two random items that seem totally unrelated or finding a sequence of phrases with no hints or any reason to order them in that way. Simply dreadful.