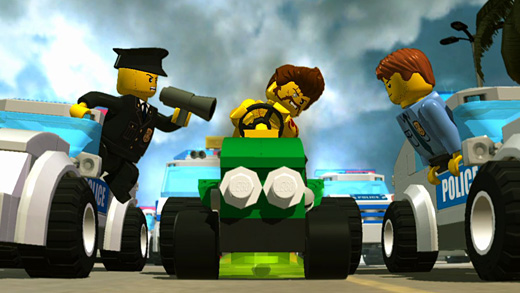 HIGH Destroying every Lego object in my path.

TT Fusion's popular Lego titles are never "great," but they always seem to hit the right notes as far as comfort gaming is concerned. I've found many of them to be appealing in a relaxing sort of way, and I like the concept of Lego-izing licensed properties like Star Wars and Indiana Jones.

, Fusion decided to take the series in a new direction by placing it in a sandbox setting with characters of their own design. To their credit, they were successful in maintaining the spirit of their core franchise. Sadly, though, not even the Saturday morning vibe of the story can make Lego City Undercover the system-seller Nintendo may have wanted it to be.

Rex Fury and his goons are wreaking havoc in Lego City, and it's up to all-star detective Chase McCain to put a stop to them. With a host of disguises and one-liners at his disposal, Chase goes undercover working with some of Lego City's elite criminal forces. The story works as a light parody, poking fun at crime dramas and dropping dated pop-culture references with reckless abandon.

Whether I was working with the Mafia to hijack a moon buggy or helping the police bust up a gang meeting at an ice cream speakeasy, I rarely got bored with the narrative. The plot isn't exactly engaging, but the colorful characters and funny scenarios were enough to hold my interest, and the solid voice-acting gives it charm and a dash of wit. I'm not ashamed to admit that I laughed out loud more than a few times, which was good since most of the stages walk the line between "clever" and "tedious."

The story missions have Chase travel around the city proper and ultimately lead him to a "Special Assignment" that takes place in a unique area. These assignments are like a self-contained amusement park, each with a bevy of secrets, enemies to fight and puzzles.

The level design is similar to other Lego games, and each of Chase's disguises are equipped with gadgets to solve puzzles. Most puzzles amount to destroying Legos, building Legos out of the destroyed Legos, and using gadgets to reach new areas. While a bit too easy, I did find them to be strangely satisfying. Sadly, this is where my enjoyment with the campaign ended. 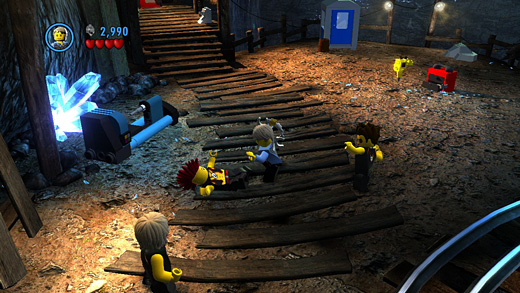 While inventive at times, most of the stages play the same way. They typically involve breaking into a building, finding an item and then making a high-speed getaway. Bear in mind that I use the term "high-speed" loosely. Driving isn't too bad when not on assignment, but the story mode chase scenes are an uninspired snooze-fest. Chase's pursuers typically don't pose any real threat, and on a couple of missions they back off shortly after pulling out of the parking lot. I'm not sure if this was a glitch or if the cliché "wakka-chika-wakka-chika" chase music scared them away.

Adding to the misery are the painful loading screens and the worthless auto-save system. Just started an assignment but want to take a break? Forget about it. Reloading the game places Chase in front of the police station thereby making a long journey back to the mission's start necessary. Of course, this gives a valid excuse to take the time to explore Lego City, which is probably where the game works best.

From beach resorts to national parks, Lego City is a surprisingly large playground with plenty of choice offerings. One could easily spend hours trying to find every secret and activity. Not only that, but I found driving around like a maniac destroying countless Lego structures to be oddly therapeutic. A score would have been a nice addition to the free-roam play, but the vibrant, cartoony visuals help make exploration one of Undercover's strongest features. The GamePad's screen adds to this, offering use of the map to plan out routes and a "detection" mode that uncovers hidden objects and missions.

There are drawbacks to Lego City's openness, however. Instead of experimenting with all of the extras, TT Fusion chose to utilize open-world design tropes that we've all seen before. Helping a farmer find his lost pigs, and then launching them out of a cannon back to their pen might be enjoyable, but it's one of the few activities that offers any novelty. The rest are made up of tired foot pursuits, stunt jumps and vehicle races. While the Lego setting makes them more palatable, they're still a bit of a disappointment.

Then there's the case of unlockables. Lego City Undercover is built around them, and every secret discovered puts the player one step closer to obtaining something they'll probably never use. The only exceptions are Chase's costumes, which are earned by playing the campaign, and the hidden "Red Bricks" that unlock cheats. But again, this entails revisiting the stages, something that I was reluctant to do.

Perhaps the biggest mistake TT Fusion made during development was leaving out co-op. Having a friend play the "buddy cop" role not only fits with the game's premise, but it would have made traveling the city and the missions a lot more approachable. This is definitely a missed opportunity, and the game suffers from it.

isn't a bad game, it's just an unfortunate one. The large city, GamePad integration, humorous narrative and imaginative puzzles certainly make the game a welcome addition to the Wii U's sparse library. However, the flaws limit the experience and effectively place the game firmly in the "good effort, could have been more" column. Rating: 6.5 out of 10.

Disclosures: This game was obtained via rental and reviewed on the Wii U. Approximately 17 hours of play were devoted to the single-player mode, and the game was completed. There are no multiplayer modes.

Parents: According to the ESRB, this game contains cartoon violence and crude humor. The violence and humor in the game is relatively tame. Pedestrians move out of the road of oncoming traffic, and if they do manage to get hit they get right back up. While children might not get some of the references, the jokes rarely step into "blue" territory.

Deaf & Hard of Hearing: I found no issues playing the game with the sound off. The majority of the dialogue is subtitled, with the exception of unimportant (though sometimes funny) pedestrian banter. The only minor issue involves the "eavesdropping" missions that require the GamePad to be held up and moved around to find conversations to listen to. This results in blocking the TV screen and, unfortunately, these conversations are not subtitled on the GamePad. However, once a conversation is "locked-in," the GamePad can be lowered and the TV subtitles can be viewed normally.

i love lego city undercover but there are two big issues with the game. there are too many areas where a poorly placed camera means death. there were times when i was lining up for a jump but the camera decided it knew better. there is also the load times. i can not stand long load times especially after i just want a quick game or want to start over quickly. i’ll just put the game down and pick up something else. that can’t be something nintendo wants to hear. hopefully there is a patch on the way.

This remains a very interesting game that might not escape the Lego stigma. Its funny because other games like Lego Batman and Lego Star Wars have become favorites of players of all ages. But this new game and being on the Wii U, it may never reach a mass audience. Still, I am intrigued. Lego in a GTA world? Sign me up.

If Nintendo can’t get more hardcore/mature titles on the Wii U then I’d be satisfied by these unique family-oriented titles like Lego City Undercover. As long as it remains a Wii U-exclusive then I feel I got my money’s worth.

On the game, I think it is really great fun and if the Wii U had a larger install base, this would be a multi-million seller. It is that good at what it is. More like this Nintendo… and Metal Gear Solid 5 too.