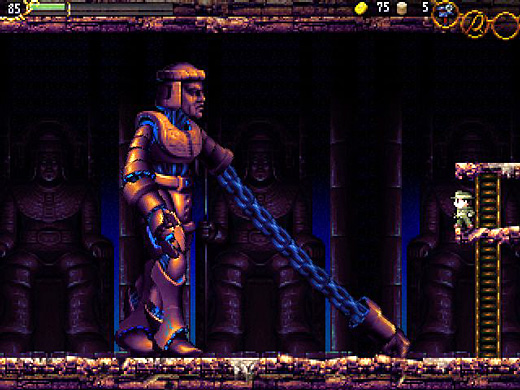 LOW Forgetting to save.

WTF How is Lameza's laptop able to pick up Wi-Fi underground?

When it comes to video games, I'm a proponent of failure. Specifically, I'm a fan of games that make losing an educational experience and not a mild inconvenience. Word on the street was that a strange game called La-Mulana might have been one to quench my thirst for unforgiving gameplay, and I was happy to see what it had to teach me.

For those not in the know, Japanese development team Nigoro (formally GR3) originally released La-Mulana in 2005 as freeware. Mulana has since been re-released for the Nintendo Wii and PC in a remastered form intended to reach a wider audience. The remake came out last year and is now available on Steam, courtesy of the Greenlight program. It's stuffed with hours of content, beautiful 32-bit-esque visuals and catchy music, all for $15.

Nigoro created La-Mulana as a love-letter to the MSX computer (a device popular with Japanese gamers in the 1980s) and also to argue that most games are too easy these days. It's debatable, but I think Nigoro proved their point. The 2D, action-platforming gameplay is not only challenging, it proves that hand-holding isn't necessary when proper game design can accomplish the same task without being a nuisance.

Take, for instance, the game's opening. The hero, Lameza Kasugi, is summoned to the ruins of La-Mulana to find his lost father and discover the secrets of the ruins. After speaking with the village elder, Lameza is given some information that should help him on his adventure. The shops in the village also offer some assistance, and some helpful emails arrive on his laptop.

Although some may be a bit shocked by the lack of a current-style heavy-handed tutorial, it's enough guidance to get any player started, and doesn't contain lengthy cut-scenes or excessive, unnecessary text.

However, don't assume this lack of introduction means the game is simple—challenging doesn't even begin to describe La-Mulana. The spike pits, crush traps, falling statues and bosses might be difficult obstacles at times, but they've got nothing on the puzzles. Forget the fact that there are a bajillion of them (not an exaggeration), many are so complex that they're almost unfair. Stone tablets, strange devices and hidden NPCs the player discovers will provide hints for solving them, but some of these clues are referring to something that happens much later in the game. For instance, I still have no idea what I'm supposed to do with the scale the displays Lameza's weight. 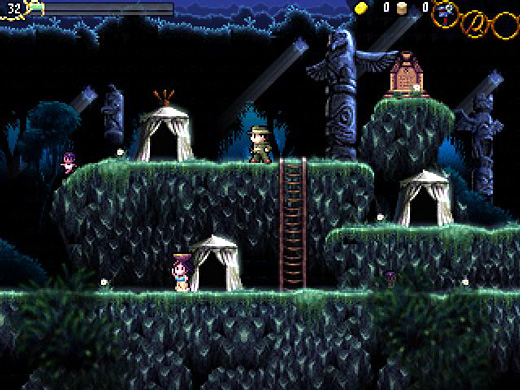 Essentially, the goal for every area is to unlock its boss. This entails finding a gem to put in an Ankh that awakens the Guardian of each ruin. Sound easy? Activating cleverly disguised floor traps, accessing hidden rooms by breaking walls, scanning murals to open up new locations and triggering lifts are just a few of the different ways La-Mulana makes finding these bosses difficult. It's entirely possible to play for hours and never encounter a boss, though—more often than not, solving a puzzle leads to even more puzzles, and new ruins to explore.

Indeed, this is not a title meant to be played casually. There are a few ruins open from the beginning, but most need to be unlocked. There isn't a proper order, but certain items must be obtained to make any progress. Naturally, this involves taking said item(s) to a previously explored area in order to solve a puzzle that, at the time, was unsolvable. Honestly, I don't think I've taken this many notes to help me get through a game since the NES era. La-Mulana is massive and I have yet to beat the game. Not for lack of trying, though—I'm just stuck.

Along these lines, Nigoro might have gone a bit too far with some of the puzzles. This is a relatively minor quibble, but due to the obscure nature of some of the solutions, La-Mulana might be a turnoff to a lot of gamers.

In one instance, I had to solve a puzzle with a pepper shaker given to me by an NPC. According to this NPC's cryptic instructions, it sounded like I was supposed to make someone sneeze. Given the fact there aren't that many living people in this game, I assumed I was supposed to use the pepper on a statue. I was right, but it took me well over an hour to find the right statue. After going back over my notes, I found that the answer was obvious, but it was still a ridiculous task. I don't have any problem with games that test my patience, but I can understand how some could find this frustrating.

All of this may sound overwhelming, but Nigoro was savvy enough to include elements that keep La-Mulana playable. One of the first major items Lameza receives is the Holy Grail, which allows him to travel back and forth between save points found in the ruins. There are also spheres that upgrade his health, equipment that gives him new abilities and programs for his laptop that greatly increase the odds of survival. There's even software that lets Lameza record potential clues found on tablets, skeletons or murals.

In many titles, it's often disappointing to find most of the equipment is worthless, underused or (worse) overpowered. Not so in La-Mulana. Virtually every weapon and item is either important or suitable for different styles of play. For example, the axe is probably the best weapon for power alone, which makes it perfect for bosses and strong monsters. The problem is that the axe is slow, and I found that the speedy chain whip performed better against certain enemies or when breaking walls. Not only is this good game design, but I found that it was much easier to clear rooms of enemies by using a variety of weapons.

Despite the overall difficulty, La-Mulana is one of the best games in its genre. It's a polished (and hidden) gem that's sure to satisfy nostalgic gamers craving some old-school adventure, and accessible enough to pique the interests of a younger gaming crowd. Simply put, I can't recommend this game enough. Rating: 9.0 out of 10.

Disclosures: This game was obtained via paid download and reviewed on the PC. Approximately 25 hours of play were devoted to the single-player mode, and the game was not completed. There are no multiplayer modes.

Parents: According to the ESRB, this game contains animated blood, mild fantasy violence and suggestive themes. Parents shouldn't worry about letting their children play this game. There is a lot of references to real-world religions and mythologies, but the story takes a neutral stance and most people of faith shouldn't find it offensive.

Deaf & Hard of Hearing: Due to the amount of audio cues that provide hints, the deaf and hard of hearing might want to avoid this game. The audio hints typically signal when there's a hidden shop in the area, or if a puzzle has been solved. I didn't find playing with the sound off to render the game unplayable, but it was certainly a lot harder.

In response to your WTF, wifi underground is entirely plausible, as long as there’s a router somewhere. Or even a 3G cell like on underground trains

I enjoyed this review – it tells me that this is a game I can admire from a distance but which would drive me crazy to play. Nice review.

Coincidentally, I am currently re-living my childhood with the BlueMSX emulator. Road Fighter, Knightmare, Yie Ar Kung Fu – the original computers were popular in Japan and also, inexplicably, in rural Ireland.

I screwed up the WTF bit. I was going to change it to “Lameza’s Laptop has an obscene battery life” or something like that, but it slipped my mind. Oh well.