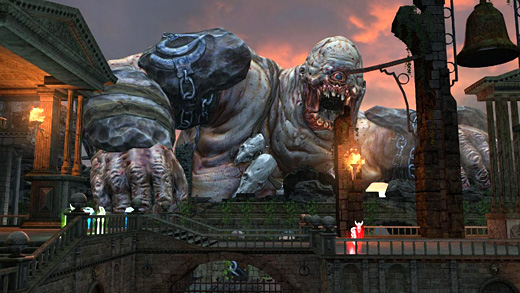 LOW Rotting in the matchmaking lobby in the hopes someone will join.

I'll admit, I'm not big on multiplayer shooters. I don't hate them and I've found joy in some, such as Left 4 Dead and Team Fortress 2, but the fact that the majority only offer action devoid of narrative and with no true goal in sight makes it hard for me to get into the genre.

With that being the case, why would I want to give God Mode

, a third-person co-op horde shooter with a simple premise, a chance? Easy—it looks like Diablo meets the coin-op classic Smash T.V., two games that I spent a lot of time with in my younger years.

In many respects, this vintage game mash-up rings true. There are plenty of demons, skeletons and other foul beasts to slay, and the smarmy, condescending in-game announcer gives God Mode a sadistic game show vibe. Unfortunately, the silver-tongued announcer's japes get old quick, and the limited gameplay holds this otherwise enjoyable run-and-gunner back from being completely appealing.

God Mode begins by having players create a character that for no apparent reason has to be male. For a game supposedly based around customization, the decision to leave out a female option is ill-advised, and I can imagine more than a few gamers will shy away from the title based on this fact alone.

Moving on, the character is a descendent of an ancient god, and has recently met an untimely demise. The objective now is to gain levels and survive the underworld either alone or with a few friends by defeating wave after wave of monsters in each of the five arenas. There are primary and second weapons to choose from, with the addition of a special ability that can be triggered periodically, including “God Mode” which, of course, grants damage immunity and unlimited ammo.

While the mechanics are relatively simple, they're efficient and effective. Dodging, sprinting and gun-play work very well together, so it's entirely possible to get out of sticky situations by quickly rolling and going into a full sprint toward some health and armor pick-ups. 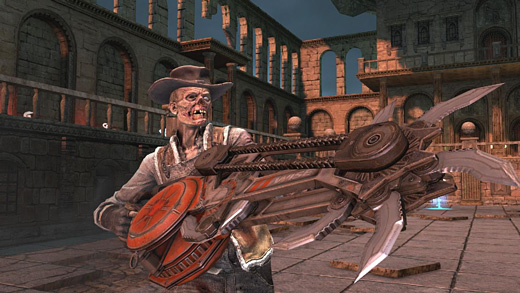 The hook to God Mode, though, is with the Oaths and Tests of Faith. Up to seven Oaths can be selected before a match begins, each one designed to make the game more grueling, like rendering armor useless or making weapons less effective. However, the more Oaths the player selects, the more experience and gold is given during play.

The Tests of Faith are dealt out randomly throughout each arena. Most of them, like the Oaths, are designed to make things rough, but quite a few provide perks like heath regeneration or less-powerful enemies. Others are merely a gag, like giving the demons hats or speeding up the sound.

Both of these elements yield a mixture of positive and negative gameplay twists, which in turn makes the repetitive action a little more rewarding. The Tests of Faith, in particular, keep things fresh as their unpredictable nature can help stave off boredom.

This generally nice design does have some drawbacks, however. The shooting is spray-and-pray, so those with itchy trigger fingers will probably find some excitement. It grows stale after awhile, though, and there really isn't a need for strategy, especially playing on Bronze—the default difficulty level which most players will want to spend the most time on in the early goings.

Truly, God Mode was designed to be played on either Silver or Gold difficulty, but they're not worth attempting until after grinding for levels and stockpiling money to buy new powers, weapons and modifications. Sadly, these unlockables are hit-and-miss, with only a few like the SMG, Assault Rifle and Mini-Gun being worthwhile.

If anyone plans on purchasing God Mode, I would strongly recommend finding a few other friends to do the same. As far as I can tell, there aren't that many people playing online (on Steam, at least), which is a shame since soloing is a struggle early on. However, after earning a few levels, buying a better secondary weapon and modifying the default SMG, the arenas are much easier to handle alone on Bronze.

might be worth the price of admission. The ruined temples and cities are nicely detailed, the creature design is superb, the controls are tight and the fast-paced action can be addictive. However, even if one is able to round up some pals online, the redundancy and lack of depth make God Mode a mixed blessing. Rating: 6.0 out of 10.

Disclosures: This game was obtained via paid download and reviewed on the PC. Approximately 10 hours of play were devoted to the multiplayer mode, and the game was not completed because it doesn't have an ending. There isn't a single-player campaign, but the multiplayer can be experienced by just one person.

Parents: According to the ESRB, this game contains intense violence, blood and gore, suggestive themes, partial nudity, drug reference. Parents shouldn't have many problems allowing their children to play the game, though some of it may be cause for concern. The fantasy violence is against ugly monsters and isn't as bloody as the ESRB rating implies. The suggestive themes and drug references come from some of the dumb jokes the announcer makes before a match starts, but those can easily be skipped. I'm not exactly sure where the partial nudity is, though. Perhaps one of the statues in the arenas.

Deaf & Hard of Hearing: I didn't have any problems playing with the sound off. In fact, I kind of preferred it that way since I didn't have to listen to the annoying announcer.