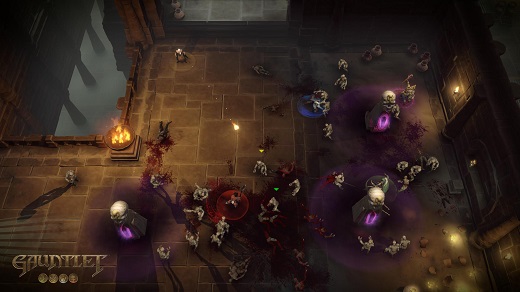 HIGH Playing through the entire game with a full group of people.

LOW Myself or party members disconnecting during online

WTF Why aren't potions available to buy in the shop?

Plenty of classic arcade properties like Pac-Man, Space Invaders and Donkey Kong have gone through changes over the decades, either by diving into other genres or by adding more complex gameplay than their coin-op forbears. Atari's multiplayer hack-and-slash Gauntlet has seen itself remade over the years, including the popular Gauntlet Legends and Dark Legacy which both contained RPG elements, more playable characters, and a more prominent story. While that added depth was nice, Arrowhead Game Studios's Gauntlet remake is proof that simplicity can still be just as fun.

The four characters from the original are back, each one bringing something different to the gameplay table. They've been upgraded, too. Instead of just their default attacks, they now have more abilities available to them.

The Elf can use a sniper shot that makes his arrows more powerful, the Warrior has a "strong" axe swing, the Valkyrie can do a dashing joust attack, and the Wizard has nine unique spells that do things like freezing or burning damage. In addition, all of them also have a special cool-down ability to help them get out of a jam.

After selecting a hero, it's off to the dungeons, each one containing four stages, and the first three stages of each dungeon consist of four zones.

The first zone involves heading toward the exit while slaughtering enemies and the demon pillars that spawn them. The second zone is more interesting as it contains either something chasing the players (like the Grim Reaper) or an environment obstacle like balls of flame raining down on the party. The third zone is an arena where players must fight off a few waves of monsters before beating the stage, and the fourth zone is a boss fight.

This repetitive level design is Gauntlet's biggest flaw. Sure, all of the dungeons have a different look and feel to them, but the samey concept found in each one is unfortunate. The silver lining is that there are only 12 stages, and all of them are over fairly quick.

While Gauntlet only takes about four hours (or less) to beat, there's replay value packed in here. For one, the addition of Masteries makes trying out different characters and experimenting with various play styles rewarding. Masteries are essentially achievements that act as a leveling system—the more of them accomplished, the more bonuses players receive. These rewards range from extra damage against monsters to new abilities unlocked.

To go along with the feats provided by Masteries, Relics that offer more supporting skills (faster movement, summon a tornado, etc.) are also available. Only two can be equipped at a time, and they must be purchased with gold found adventuring, but they can be upgraded. There aren't many to choose from, but they're all worthwhile and selecting the right pair for the right character can make things a lot easier.

Gauntlet is best experienced with others, just like the original. Soloing is always an option, but things can get pretty sticky pretty fast, even on the default difficulty. Playing with friends or random people online is the way to go, so that one person can focus on destroying summoning pillars while the rest mop up the monsters. I didn't have much issues other than lag spikes hitting every once in awhile, or some knucklehead joining the game with an offensive name—when that happens, the "kick" button comes in handy. The action isn't a chaotic mess, either. I was able to see where I was even with loads of skeletons, mummies and my teammates in the same screen.

In an era where action-RPGs are chock-full of skill trees, obscene amounts of loot, myriad spells and skills, the back-to-the-basics approach in Gauntlet is a breath of fresh air. This is pure arcade hack-and-slash with a sensible dose of modernity that captures the essence of what makes the original such a classic. It's not as inventive as it could be, but this is a solid effort from Arrowhead. Rating: 7.5 out of 10.

Parents: According to the ESRB, this game contains: violence, blood and gore. I honestly don't know why this game is rated Mature. The bloody fantasy violence is cartoony and not really graphic. I'd say a Teen rating would be more accurate. It's perfectly fine for young-adults on up.

Deaf & Hard of Hearing: I didn't have any issues playing with the sound off, so the deaf and hard of hearing should find no issues here.