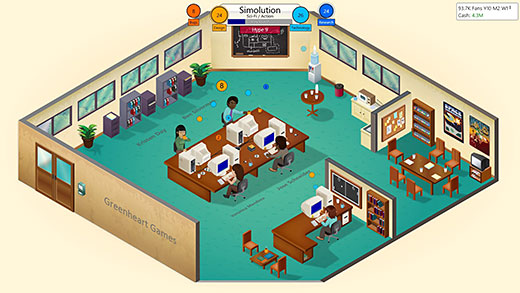 HIGH The satisfying "ding" that sounds when a game is complete.

LOW A game getting perfect review scores but barely selling.

WTF I haven't updated my physics engine since the 90s and I'm still turning a profit.

Ever have the desire to be a game developer? How about a yearning to understand the development process and discover what it takes to make it (or break it) in the industry? If so, don't play Game Dev Tycoon to find out.

The journey from rags to riches (or bankruptcy) begins in the early 1980s in a garage. Even though Atari and Colecovision were around at the time, the first couple of years are spent coding titles only for the PC and the Commodore 64.

Yes, this is a title where not-too-clever nicknames are given to real-life computers, home consoles and handhelds. Other unfortunate pseudonyms include the "Ninvento TES" and the "Vonny Playsystem".

Building games is simple at first—just select a genre and style (horror adventure, racing action, etc.), choose what mechanics to focus on (AI, level design, dialogues, etc.), pick a game engine and, finally, a platform. Once that's complete, tech and design points are awarded, the game is put on the market and the reviews and sales come pouring in.

The goal is to become a successful creator and publisher within 30 years, though the game can continue to be played after that goal. As time goes by, more options are unlocked and fancier engines can be made. Soon it's possible to release multi-platform titles, to transition from 2D to 3D, and to sink money into advertising and hiring more people. I didn't find this added complexity to get too overwhelming, even with a full staff and research teams, but I did take issue with Tycoon's inconsistent definition of "success."

The tutorials that appear as the game advances outline a common-sense recipe for profit. I was told to not make the same game twice, to constantly upgrade my physics engine, to train myself and my employees whenever I could, and to pay attention to what kinds of games were popular at the time. I did all of this, but my business wound up folding after about ten years.

Part of the problem is there isn't anything in the game that provides reasonable tips for how to create a popular title. The only tool offered is post-sales research, but it doesn't specifically say what gameplay elements to devote more or less time to, and instead offers "Racing and Action are a great match" or some other rote observations. The reviews don't help either, since only short quips like "Fun" or "Falls a bit short" are all that are given.

So, instead of following the game's advice, I started making the same game every other time, and only for PC and whatever console was hot at the time.

Horror and Alien actioners were my staple IPs, and I discovered that this approach actually worked … sort of. I was consistently turning a profit every year, but for whatever reason I'd create a string of games that sold poorly and were trashed by critics, despite the fact I shaped each of these games to fit what the market demanded. Sure, this is realistic to a point, but my income eventually flattened and my business wasn't able to continue growing.

The success or failure of a game seems to be completely random. Following the guidelines will increase the odds of popularity, but the creation process involves merely moving sliders and watching point bubbles float to the top of the screen, with no way to actually tell what the finished product is like. It didn't appear to matter that my staff and I had become more experienced, or that I hadn't upgraded my game engine in over a decade. I was able to either strike gold or release duds periodically no matter my methods.

The only possible way I found to hit the profit mark needed by year 30 was to crank out games rapidly. I'm talking upwards of 20 games per year! I could be wrong, but I'm sure there isn't a single developer, let alone a single team, that can accomplish a feat like that. Inaccuracy aside, doing this is so incredibly taxing and boring that I gave up. There are probably other ways to "win", but the coding appears to champion this method the most.

Having to flood the market year in and year out with only two or three different types of games in order to remain a viable company gave me the impression that perhaps the developers were attempting to use Tycoon to lampoon the industry, but if Tycoon is supposed to be commentary, it isn't very good at it.

For example, topics like piracy do pop up now and again while playing. Prompts asked me if I wanted to start using data-rights management software, or threaten modding communities with lawsuits. Logically, saying no to either request yielded more fans, but I didn't notice much of a difference in sales when I said yes. These topics didn't get addressed any further, either. Every time I was faced with a controversy and thought things were about to get interesting, the issues were swiftly swept under the rug.

I'll admit, some of what takes place in Tycoon does reflect reality to a degree. The brief reviews could be indicative of the industry's obsession with scores as opposed to constructive criticism, and achieving perfect scores and pandering to demographics is all that seems to matter in the game and the real world. However, I don't really think Tycoon really wants to be more than ‘a glimpse' at video game production, and any attempt to comment on the industry from this dull, monotonous experience fails to hit its mark.


Disclosures: This game was obtained via publisher and reviewed on the PC. Approximately 9 hours of play were devoted to the single-player mode, and the game was not completed. There are no multiplayer modes.

Parents: It's perfectly fine for kids. There's no violence, nudity, or cursing at all.

Deaf & Hard of Hearing: I had no issues playing with the sound off.

Unfortunately another reviewer who doesn’t really know what he is talking about, because he didn’t took the time to understand the underlying mechanics or just failed to do his due dilligence. The following information can be found out with a small steam search and 4 hours of playing the game. I bet the “reviewer” didn’t even do that. Failure and success are dependant on many things: – right ratios of the graphics, sound, world design per game type – Making the game for the right system, because each system is better or worse for some type of games – the… Read more »

“The success or failure of a game seems to be completely random.” I find issue with your statement here, as according to my personal experience your game would consistently be successful if you followed what matched with what (Genre X has a need for X level of Story/Quests). “It doesn’t specifically say what gameplay elements to devote more or less time to”. This I know is incorrect, as the game does give hints out like, “Graphics are very important to this genre”. Afterwards, it always shows up to three +/-‘s underneath the sliders to let you know what to choose.… Read more »