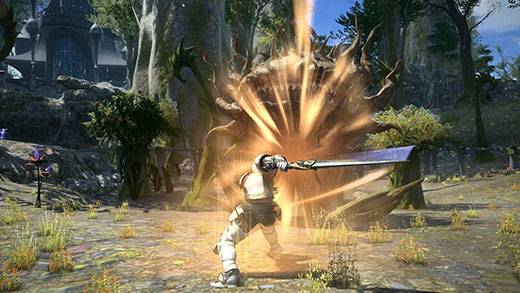 HIGH The music during the Ultima Weapon fight.

WTF Someone needs to give Square-Enix an intervention for their crystal addiction.

I didn't play Final Fantasy XIV when it originally released in 2010, but by most accounts it was a disaster. Apparently Square-Enix thought it was, too. They completely overhauled the game and re-released it in 2013 as, fittingly enough, Final Fantasy XIV: A Realm Reborn

The good news? The meat of the game is surprisingly enjoyable. The bad news? The Playstation 3 version is a technical mess.

Just like most MMOs, ARR is a World of Warcraft clone. It uses a similar user-interface (UI) that consists of customizable hotbars to access spells, skills and items, and focuses on questing and dungeons for leveling. In this regard, there's not much that makes it stand out it in a sea of samey fare. A shame, really, since it would have been refreshing to see Square-Enix use this mulligan to bring something new to the table.

This lack of risktaking aside, the dev team did manage to execute these MMO staples well, and even improved some of them. While I can't comment on how it compares to FFXIV 1.0, it's certainly a step up from the inaccessible and time consuming Final Fantasy XI, the first online outing for the series. Indeed, I found the combat, questing, job system and even the writing to be more palatable than anything it (or WoW) has to offer.

However, don't be fooled — this is still a Final Fantasy game despite the cookie cutter MMO structure. It's obvious the developers wanted to draw in fans by using ARR as a love letter. They stuffed countless homages to numerous other FF entries, including the "Warriors of Light" motif that started all the way back in the original. Of course Moogles and Chocobos are present, but obscure references like the battle music from II and Zell's tattoo from VIII are found, as well as obvious nods such as Magitek (VI) and The Crystal Tower (III).

The main narrative recalls previous games, as well. ARR is set on the continent of Eorzea, and the people of the city-states there are facing multiple problems. They're trying to recover from an event dubbed "The Catastrophe" that occurred five years prior, but the rebuilding process is being slowed thanks to Realpolitik, Beastmen tribes summoning their Primal gods, and a looming threat from the Garlean Empire to the north. These narratives eventually merge and the story becomes an epic complete with magical crystals, power-hungry villains, cults and resistance movements. In short, it's a tale that fits right at home with the franchise.

Eorzea itself is about average in size compared to other games in the genre. Traveling can be done via airship, chocobo, fast-travel or just good ol' fashioned hiking. I never felt like I was getting dragged around by the quests since traveling is a cinch, and I was impressed that the missions are structured in such a way so that they just shuffled me from one area to the next, therefore allowing me to familiarize myself with each region and immerse myself into the world.

The job system is simple, as well. Classes can be switched easily by equipping their default weapon, and all of them can evolve into a "job" after accomplishing a few objectives, sort of like the changes the heroes in the first Final Fantasy go through. The only requirements are completing a short task that finishes the class-specific quests and leveling a related alternate class. For example, a level 30 Pugilist can become a Monk once they've created a Lancer that's at least level 15.

The logic behind this is that the secondary class uses skills that complement the main class, which then makes the character "seasoned" enough to become an advanced job geared for group combat, like a White or Black Mage, Bard, or Dragoon. The need to create multiple characters is eliminated, but that means it takes a little longer to max out another class once all the quests dry up. In other words, get ready to farm dungeons, although it's not as bad as it sounds.

The reason grinding isn't as onerous as it is elsewhere is that fighting monsters is less mindless and more active than in similar MMOs. Most of the enemies have a special ability that's highlighted by a cone appearing in whatever direction the attack is going to hit, and must be dodged to avoid damage. In addition, most of the available classes use combos to chain attacks, with some special moves receiving bonuses if they strike an enemy's flank or rear.  Adding minor strategies like these make the battles more interesting, especially when participating in a group dungeon.

Speaking of the dungeons, it's the layout and focus on teamwork that make them appealing. Many contain traps, puzzles (or in the case of The Wanderer's Palace) being stalked by a giant Tonberry. The bosses are the true joy here, however. The ones early on are the bland "tank-and-spank" variety, but soon after it starts becoming important for players to communicate and assign tasks to avoid powerful attacks or other obstacles.

Things like these dungeons are what made my time in ARR interesting enough to continue playing after my free trial. The amount of endgame content, including more story missions and raids with each major patch have held my interest, too. However, I did make the switch to PC because I just couldn't handle the PS3 port.

On the console, lag spikes have a tendency to happen at inopportune times, like when fighting one of the Primals. I was killed repeatedly battling Titan (who's not easy to begin with) when bandwidth hiccups caused the game to crash entirely. The graphics have been dialed back in order to lessen the chances of crashes , but these things still occur when the action gets hectic or during peak hours. These visual limitations continue to cheapen the experience thanks to texture pop-in, which means it can take a few moments for NPCs and setpieces to appear onscreen in crowded areas.

Then there's the controller. Using one works alright for combat, but it just isn't capable enough to manage the copious menu screens. It's even worse for chatting. A USB keyboard or ChatPad can help in that department, but it's still awkward. Better optimization for consoles would have been nice because in its current format, it's too overwhelming and takes hours to get used to.

In many respects, A Realm Reborn

has charmed me. The developers did an excellent job at creating a Final Fantasy experience online even though they borrowed a lot of the design. On the other hand, it's unfortunate that it runs so sluggishly on Sony's outdated console, but perhaps the upcoming Playstation 4 version will alleviate some of these issues. This is definitely a title that fans of MMOs and Final Fantasy should give a shot, just not on the Playstation 3. Rating: 5 out of 10.


Disclosures: This game was obtained via publisher and reviewed on the Playstation 3. Approximately 50 hours of play were devoted to the multiplayer mode during my PS3 free trial, and an additional 50 has been played on PC.

Parents: According to the ESRB, this game contains language, mild blood, sexual themes, use of alcohol, violence. This game is pretty safe for those 13 and up, maybe as young as 10. However, parental guidance is suggested due to the online environment. The culture for this game is less toxic than most online games, but there are still some bad apples prone to harassment and vulgarity. There is a chat filter that censors bad language (turned on by default), but some words and phrases do slip by.

Deaf & Hard of Hearing Gamers: I had no issues playing the game with the sound off. There are visual cues for everything and the cutscenes contain subtitles.

I just had an all around bad experience on the PS3. Everything from using the controller to bandwidth hiccups, which I know is something that depends on your internet connection and varies from person to person. However, I do have the fastest internet available in my area and I was still either suffering from lag during some of the boss fights (Titan in particular) or I’d just get disconnected entirely every once in awhile. The pop-in has a tendency to effect quest givers the most, from what I noticed. There were a lot of quests where I couldn’t find the… Read more »

I didn’t have near that much trouble on PS3. Any issues I had with lag was during overcrowded FATEs, but never in battles or instances or anything else. I played all 50 levels and all dungeons on PS3 with no issues at all. When I played on PC, the only plus I had was that it looked much better.

Yes, the chatpad is awful for communication, but a USB keyboard worked wonderfully.

What other technical issues did you have other than lag?