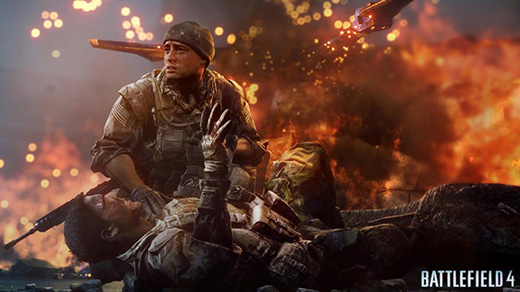 WTF Seriously, why do I have to launch this game from my browser?

As a franchise, Battlefield has always been a multiplayer-centric first-person shooter. This changed slightly when the Battlefield: Bad Company spin-offs were released, both of which contained entertaining and humorous story modes that actually felt like some effort was put into their writing. Battlefield 3 was a huge step back in this regard, and Battlefield 4

The solo campaign is a formulaic military “epic” in which America fights (of course) China and (of course) Russia. Why they’re at war, I have no idea. There's some sort of rebellion in China against the current regime, and Russia somehow plays a role, but I started losing interest after the second mission. Honestly, the narrative is littered with so much yelling, so much jargon, and so many forced, melodramatic “emotional” scenes, that it's pointless to even attempt to follow along.

Each mission is standard cinematic fare found in games of this ilk. There are stages on ships, on-rails segments, urban warfare, timely escapes from submerged vehicles, a forced-stealth level, and shootouts on snow-covered mountains. Basically, anything the developers could think of to show off their shiny new physics engine is present.

These areas are generally fine in design, and many have plenty of places that can be explored or used to engage the enemy from a different angle. There's nothing absolutely awe-inspiring here, but they suit their purpose. The problem? The other squad members.

I entered a jet hangar with my team fully expecting it to be filled with Chinese soldiers (and it was) so I began “spotting” all that I could find with my camera, then gave the order for my squad to attack. They did, but it was a shameful performance.

None of them attempted to flank or find better vantage points, and they stopped firing when the “engage” meter stopped flashing. Of course, I couldn't tell them to start shooting again until the gauge refilled, so the combat became more hectic since every bad guy turned their sights on me in the interim.

Mechanical scenarios like this happen often, and they become even more frustrating when running to find more ammo or a safe place to recover since the squad immediately quits fighting and tags along. To be fair, there are instances when the friendly AI decides to be helpful and attacks without being given direct orders, but they're awful shots and I found it was easier to ignore them half the time.

The silver lining here is that the Frostbite 3 engine makes all of this, including the multiplayer, absolutely stunning to behold. I was spellbound by how water flowing from a drain pipe looked, or rain running down the characters faces. My jaw dropped when I a witnessed a skyscraper collapse. There's a fantastic amount of detail here, though it’s best experienced on a high-powered gaming PC.

As with the majority of the Battlefield entries, Battlefield 4 is truly intended to be played online with friends. DICE's brand of squad-based multiplayer is strategic, balanced, thrilling, and allows for more customization and creativity than most other games in the genre.

While all of this is still present, there are some problems. The biggest? Not much has changed from Battlefield 3. The classes (Assault, Engineer, Recon and Support) have been tweaked, but the only major additions are the new Obliteration mode, which has teams scrambling for a randomly placed bomb to blow up objectives, and the heavily advertised “Levelution” gameplay.

What Levelution means is that instead of the maps remaining static, most of them go through changes as a match progresses, or when players trigger an event like blowing up a dam, or toppling the aforementioned skyscraper. They do look nice, but they don't have much of an impact on how a session plays out.

Disappointingly, old issues remain. The large maps are an absolute bore to traverse when running between objectives, and most of the weapons and gadgets are locked in the beginning. It’s rewarding to gain experience points in order to unlock a snazzy gun, but there needs to be a wider selection available from the outset in order to keep it from feeling like too much of a chore.

Even so, riding around in tanks and jets while destroying the opposition is a predictably good time… When the game is working.

Patches are on the way, but servers are prone to crashes and are plagued with bugs. Most are minor, like missing textures, but a few ruin the action and should have been fixed before launch—one such killed me instantly by tossing me out of bounds right after I exited a helicopter. Worse, I had trouble a couple of times when queuing up to join a server and had to reload the game, and in another instance the experience I gained during a match wasn't saved.

Even if multiplayer wasn't buggy, Battlefield 4

would still only be a barely passable installment in all respects besides the snazzy graphics. EA and DICE played it safe by providing the same thing they did the last time around, with another phoned-in campaign and only minor alterations to the online. Methinks it's time for a change. Rating: 6 out of 10

Parents: According to the ESRB, this game contains blood and gore, intense violence, strong language. This is a violent, moderately bloody experience that is definitely not designed for kids, especially considering the crude language and trash talk used by many of the players in the multiplayer portion of the game.

Deaf & Hard of Hearing: I attempted to play it with the sound off, but it was incredibly difficult. There are visual cues that show where shots are coming from when hit, but not being able to hear the shots can cause some problems, especially during multiplayer. Granted, enemies are displayed in red on the mini-map, but only if they've been “marked” by allies or are firing their guns. It's doable to play the game without being able to hear it, but it makes it so much more challenging that it may not be worth it.

It’s not worth a separate review, but I’ve played a bit of BF4 on PS4. It looks very pretty when it decides to incorporate colors other than gray and black, but most of Tayo’s criticisms apply there, only moreso. I can’t speak to the narrative quality of the single-player campaign’s later chapters because I have had two crashes that resulted in total save corruption, forcing me to start over entirely. This is the sort of thing that can only result from a poor design being badly implemented. I have not tried a third time, because as a concept the SP… Read more »